Vitreous is an arcade shoot-em-up made in PICO-8.

This game was created during a weekend game jam held by Warwick Game Design Society and LevelUp UK. The theme was "arcade", and games made for this jam will be showcased in an arcade to raise money for Special Effect.
The game jam's fundraising page can be found here.

Use the arrow keys and the Z or X keys to control the game.

Travel through all the zones to defeat the three bosses. Each loop through the game will get faster, so good luck. Collect 7 powerup objects to increase your weapon level. If you get hit, your weapon level will decrease by one. If you haven't got an upgrade to your weapon level, you will lose a life and need to restart the current zone. You will get an extra life for every 20,000 points you collect.

Mark as Spam
dungeonsolitaire
by Mush

A deck-building, dungeon-making, rogue-like card game made for the 2019 GMTK jam!

The theme of this jam was "Only one". This game demonstrates that theme by putting players in situations where they are only able to pick one card from a deck that the are continuously building.

At the title screen, you can push the Z key to start the game. You will then be shown the deck building screen. 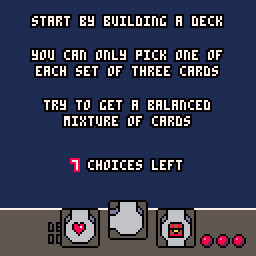 At this screen, you will be asked to pick seven cards to make your starting deck of cards. For each set of three cards, use the left and right arrow keys to pick the card, then the Z key to confirm.

Once you have selected all of your cards, the game will begin.

This screen is the main screen of the game. On each level, your goal is to move the player piece from its starting location to the staircase. You may move the player in any of the directions shown by the arrows by using the arrow keys.

However, most of the time, there will not be a straightforward path to the staircase. In that situation, you will need to play some cards.

When at the main game screen, pressing the Z key will open the Deck Menu. 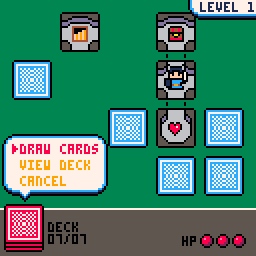 At this menu, you can move the cursor up and down with the arrow keys, and select an option with the Z key. Selecting "Cancel" or pressing the X key will close the menu.

If you select "Draw Cards", the game will automatically draw the next 3 cards from the deck. 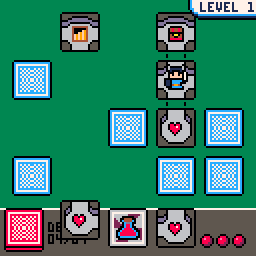 When the 3 cards are displayed, you can select one of the cards with the left and right arrow keys. Press the Z key to confirm your selection.

The card you select will be moved to the playing field. The other cards will be discarded, and cannot be used until the next level. 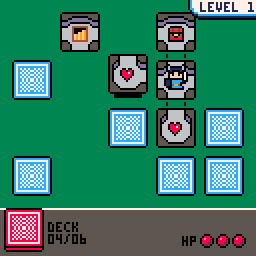 At this point, the card you chose can be moved with the arrow keys. When it is in the correct position, press the Z key to place it.

When you place a card onto the table, it will not return to your deck. Think carefully about which cards to use.

If there are fewer than 3 cards remaining in your deck, you will only be able to pick from those ones.

By either selecting "View Deck" from the Deck Menu, or by pressing the X key at most points during the game, you will be able to view the cards in your deck. 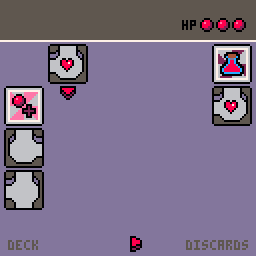 Pressing the Z or X key will return you to the previous screen.

As well as having different entrances and exits, some rooms have special features:

The staircase is the main goal of each level. Aim to move the player piece to this space.

Move to a room containing a heart, and your HP will be replenished by 1 point.

When you move into a room containing a chest, you will be immediately given a choice of three more cards to add to your deck.

When you enter a room containing a monster, you will fight. The monster will be defeated, but you will lose one HP in the process. When you run out of HP, it's Game Over.

Certain cards cannot be played onto the board, and instead perform special functions when played. There are four types of these, and a description is displayed on-screen whenever they can be selected.

Instead of a staircase, Level 9 contains a Crown. When you pick up this Crown, you will win the game!

Mark as Spam
demon_castle
by Mush

Mark as Spam
allocation
by Mush

This is my submission for the 2018 Game Maker's Toolkit Jam.
The game's submission page is hosted on itch.io: https://mush101.itch.io/allocation

Allocation is a Metroidvania game without a connected world map. Instead, you must create pathways between key points using the rooms that you collect as you explore.

Rooms are divided by difficulty, so you decide how challenging the game will be by creating your own paths to move around the world. The more you explore and add rooms to your collection, the more choice you have when designing your routes. 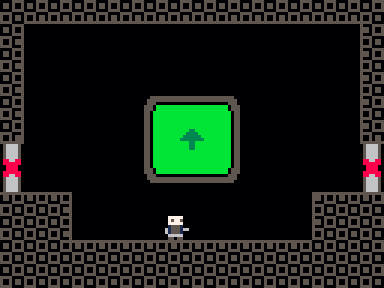 Press the up arrow in front of the monitor to access the map system. 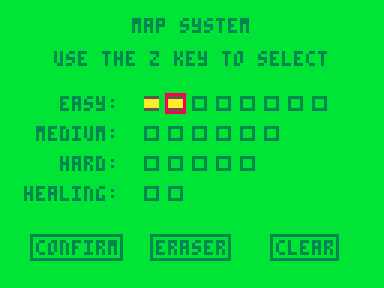 From this screen you can see the rooms you have obtained. If you select one of the yellow rooms and press the Z key, you can then place that room onto the minimap.

Place a few rooms onto the minimap to connect two areas. Aim to reach the red dot room on the right-hand side of the map!

Z key - Jump / Select an option in the map system.

X key - Shoot / Cancel an option in the map system.

Mark as Spam
terry_the_turtle
by Mush

Terry the Turtle carries his house on his back, but what makes a house a home? Can Terry help all the lost animals?

This game is entirely controlled using the left, right and down arrow keys.

This game is a submission to Global Game Jam 2019.
Here is the game's jam page: https://globalgamejam.org/2019/games/terry-turtles-big-adventure

The Global Game Jam logo was created by @MBoffin on Twitter.

Mark as Spam
Quest for the Book of Truth
by Mush

Quest for the Book of Truth

A Zelda-inspired adventure for PICO-8!

Once the game is started, your character can be moved around the screen using the arrow keys.

The Z key will use the item shown in the top-right of the screen. You will start with a sword, but you will need to find other items in order to complete the game.

Pressing the X key will open a menu which shows the name of your current item. Once you have obtained other items, you can switch which one is being used by pressing the up and down arrows. Press the Z or X key to close the menu and continue playing.

You will need to find multiple items in order to reach the Book of Truth. Below are some of the items you will be able to find.

You may find other items during your adventure. It's down to you to figure out how to use them!

You start the game with this item. It's a good weapon for dealing with enemies. You can even swing it while moving!

This item can be used to attack enemies from a distance. If you hold the button down, you can move around before you shoot the arrow. It can also be used to hit switches from further away. You won't ever run out of arrows, so you can use as many as you like.

This item can be used to break cracked rocks. It's also a powerful weapon! A bomb will explode a short while after it is placed. You won't ever run out of bombs, but you will need to wait a little bit after using one before you can place another. It's not possible to hurt yourself with a bomb, so there's no need worry about that.

This magical item will teleport you to its tip when you release the button. It is not possible to teleport into solid objects. An image will appear when you hold the button down to show you where you will warp to. It will be green when it is possible to warp.

When you find one of these potions, your maximum life will increase. As a bonus, your current life will be refilled.

These keys are required to open the gates blocking your way to the Book of Truth. You will need one key for each gate.

The world is full of interesting objects and obstacles. Here are some of the things you may encounter:

You can open a treasure chest by approaching it from below. Who knows what's inside?

When you hit a blue switch with one of your items, it will cause all of the moving blocks to change positions. When a block is raised, you won't be able to walk past it. Each blue switch will affect all blocks in the game, so try to plan ahead.

When you hit an orange switch with one of your items, it cause something to happen nearby.

These gates will block your way to the Book of Truth. Each one requires a key to open it.

This mysterious altar is crucial to completing the game. It can be used to enhance the functionality of your items. After you have found it, you will need to visit it multiple times to be able to reach the Book of Truth. Its strange power can be used by approaching it from below.

Good luck on your quest!