Here is a simple implementation of merge sort in 97 tokens. It uses less PICO-8 CPU than anything else I’ve tried (with a caveat, see below).

Note that non-randomised quicksort suffers from very bad performance on quasi sorted lists, so the above benchmark does not represent what you would get in real life. Always test in your own application.

In real life merge sort performs worse than e.g. quicksort because it suffers from poor locality of reference (cache misses), but in a high level language such as Lua this becomes meaningless.

To any computer scientist this specific implementation would be badly written and would appear to perform extremely poorly because {unpack(t)} effectively copies the whole array n times. However, in PICO-8 world this function is ridiculously fast because for the virtual CPU the operation is almost free. Use at your own risk because the actual CPU running PICO-8 will still perform the operations!

Another limitation: does not support arrays of more than 16384 elements because of the overflow in (a+b)\2. Just replace with (a/2+b/2)\1 if necessary.

Edit: here is a version that performs log(n) full array copies and is thus much lighter on the CPU. It is also about 10% faster. The drawback is that it’s now 111 tokens, but that’s still pretty good.

Also this inconsistent behaviour with spaces:

I recently wrote a post about storing random data as strings in carts and studying the built-in compression algorithm. It led, among other conclusions, to the following two observations:

Most other compression schemes have some sort of fallback mechanism when they are unable to compress a block. For instance the DEFLATE format (for zip or gzip) has non-compressed blocks. In the above thread I made a suggestion to extend the compression format in a similar way, but here I have a much simpler proposal:

I would like to propose the following syntax extensions to PICO-8 for symmetry with the shorthand peek operators. Basically it means treating the peek operators result as an lvalue:

The following operators cost 2 tokens instead of the usual 1 for compound assignment operators:

I’m writing a minifier and I still can’t really wrap my head around the parser.

Here are two similar snippets that differ only in whitespace and do not do the same thing:

When attempting to load a .p8 cart that exceeds the 65535 character limit (one that may have been created by an external editor or tool), PICO-8 silently drops lines at the end of the cart and does not report errors. It then accepts to save the (now corrupted) cart when pressing Ctrl-S, overwriting the original file.

Here is a sample cartridge for testing purposes; notice that the last print() line disappears when loading it.

One more observation: sometimes, when the 65535 character threshold lies in the middle of a Lua statement, a loading error does appear. I have been unable to identify when exactly.

I created a cart containing the following code:

Then in the shell:

If I close PICO-8 and reopen foobar.p8.png, I get gibberish in the code section: 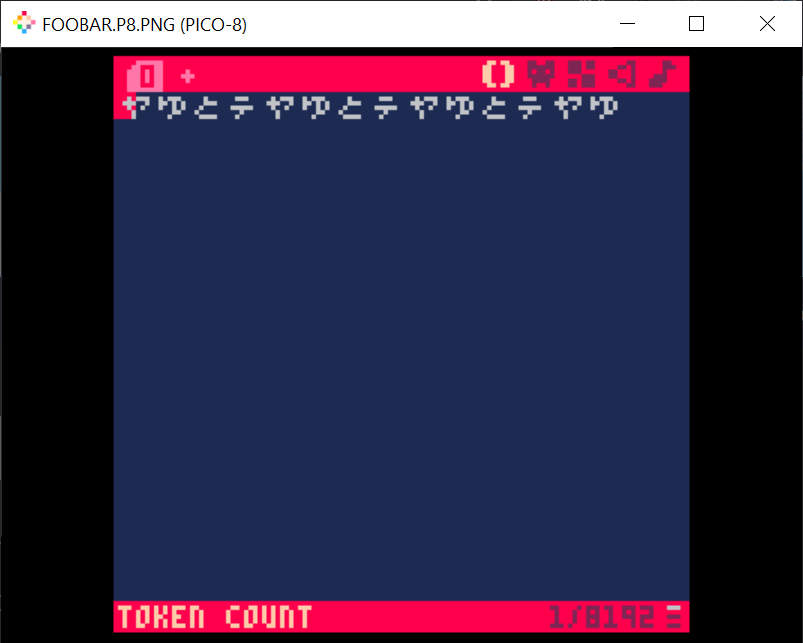 Due to the preprocessor parsing numbers differently than Lua, here are some issues:

Invalid code (2b is an invalid number in Lua):

Valid code (2b is parsed as 2 b by the preprocessor):

Not sure if it is really a bug, but poking at the 8 bytes starting at 0x5f4c then immediately peeking will discard the two highest bits:

I know this is a special area and the memory is modified by the virtual hardware between frames, but no other location discards bits like that.

The new shift operator behaviour where a>>n returns a<<-n when n is negative causes an infinite loop and freezes PICO-8 when shifting by -32768:

shr(x,n) and lshr(x,n) have always handled shift values outside the 0…31 range in a peculiar way: negative values of n are treated like n&31, while values ≥ 32 always return 0 (or 0xffff.ffff for a signed shift).

edit: same with << which no longer behaves like shl()

Not really a bug, but I accidentally discovered that '!' now gets replaced with 'self' at runtime, except when followed by '=':

This is a bit confusing because in other languages, ! is an operator, whereas here it behaves almost like any other letter.

I made a tiny plugin that lets Tiled load .p8 cartridges, edit the map section, and save them back without breaking the code or other sections. Works great for me, so I hope you may find it interesting!

Here is what it looks like with a dark theme and the grid color set to white: On Windows, when launching a cart that uses #include, all included files get locked forever and cannot be deleted or modified by an external program unless PICO-8 is stopped. Even if another cart is loaded, the old files are still locked. This makes it really hard to work with source control because no file can be updated or merged while PICO-8 is running.

Edit: here is a screenshot of resmon.exe showing that pico8.exe acquires a new file descriptor on the same file each time I press Ctrl-R:

Operator >>>= is mentioned in the 0.2 changelog, but the parser does not seem to recognise it:

Apparently the preprocessor changes the code to:

In the command prompt, this will work (where ⎵ denotes a space):

However this will throw syntax errors:

I know several people already created TTF fonts, but I believe this goes slightly beyond.

This cart is a tool that vectorises the PICO-8 font and exports it to %APPDATA%/pico-8/carts/font.sfd.p8l . You can then open that file in FontForge and modify it to your will, then export it as TrueType, PostScript etc.

It should be fully forward-compatible and if Zep ever changes a glyph, then the resulting TTF file will change accordingly.

For instance, if you are lucky enough to have a PICO-8 Gold Account™ and the latest preview version with the chr() function and the kana glyphs you’ll even get Japanese support: 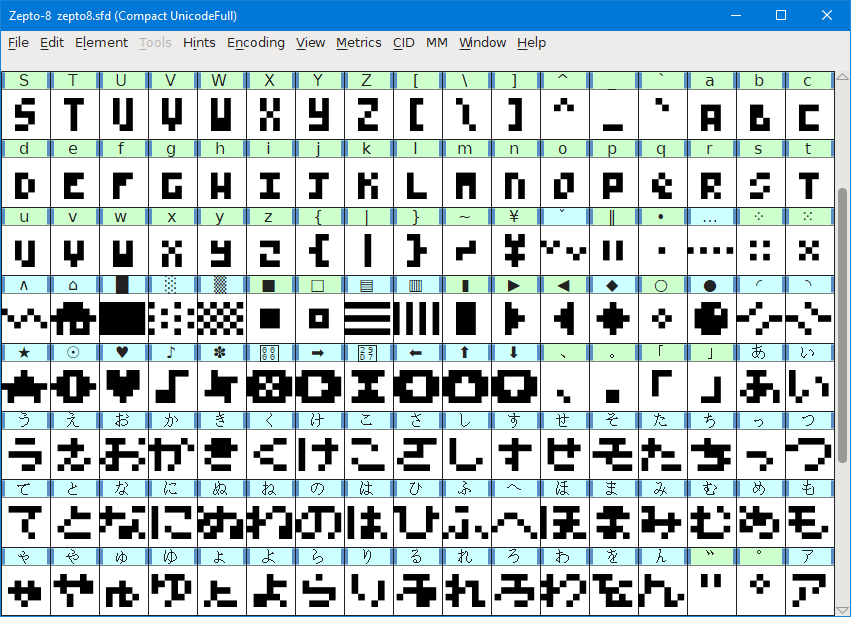 Here it is in action in the Windows font settings: 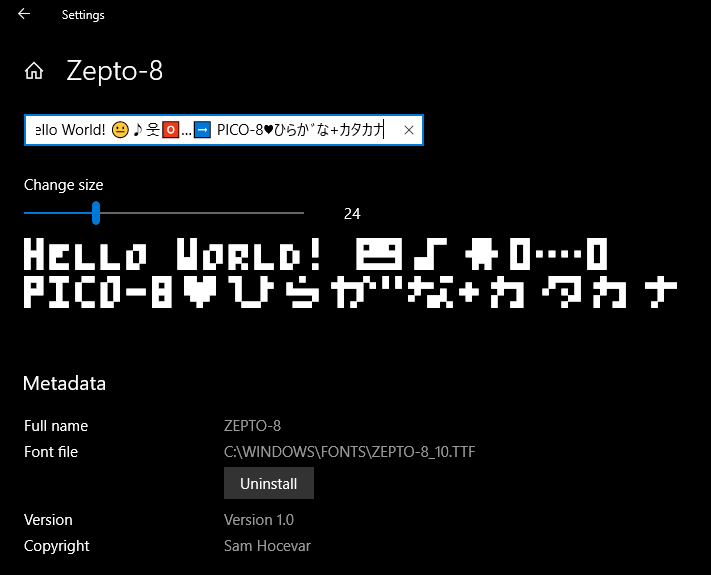 And here it is in a toy application: 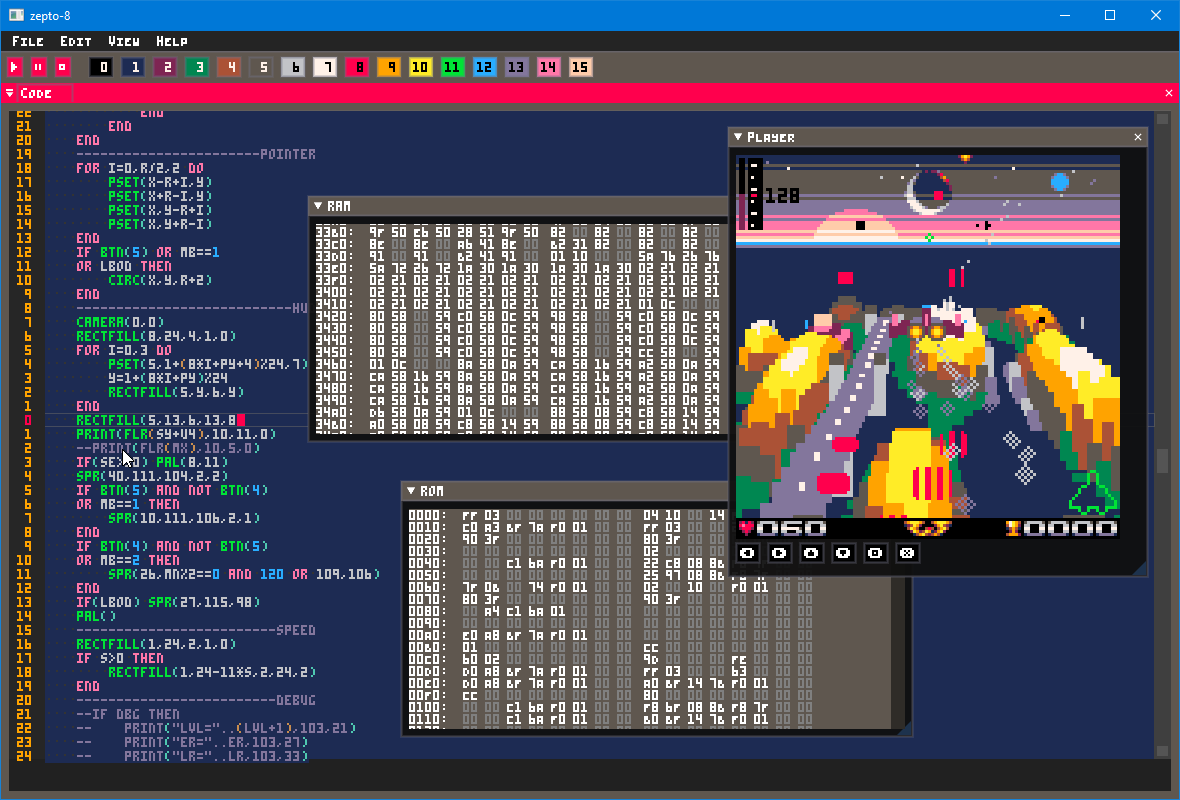 Copy and paste the snippet below into your HTML.
Note: This cartridge's settings do not allow embedded playback. A [Play at lexaloffle] link will be included instead.
tool font
P#70527 2019-12-03 13:03

Mark as Spam
The Legend of Nothing
by samhocevar

This is the game @Niarkou and I made for Ludum Dare 45 in 72 hours.

A few warnings about this version:

We want to work on the game and improve the story when the Ludum Dare voting period is over. Hope you already enjoy it as it is now, though!