I was testing out various PICO-8 cartridges in the new version, including my own Rain Gif cart, and I discovered that when I chose the built-in "Save Gif" option, it would report that a GIF was saved to the desktop: 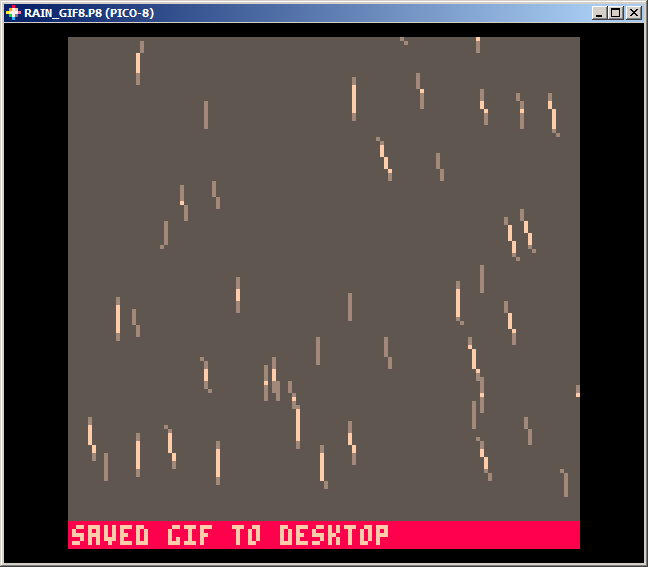 ...but no file would appear.

On further testing, I discovered that on manually saving an image, it throws an error: 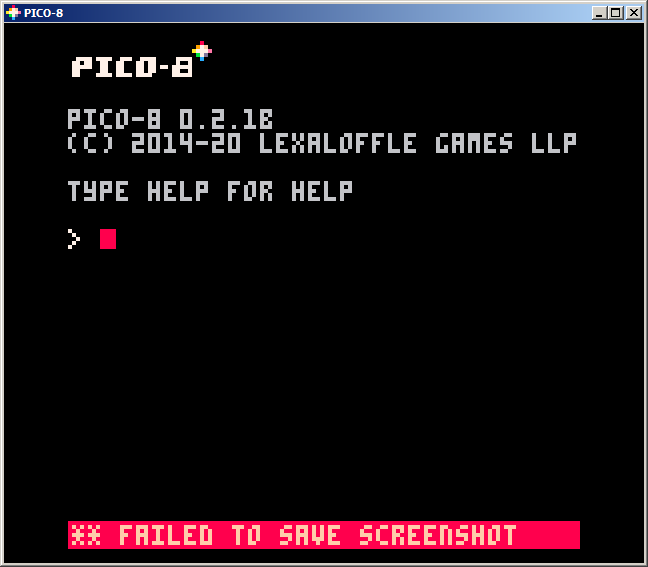 I'm not sure why this would happen - I've already checked whitelisting PICO-8 in my virus checker and that changes nothing. (And besides, I can save files and use the audio exporter just fine.) I'm running Windows 7 (yes, I know...) and installed PICO-8 yesterday using the installer download.

Something I noticed today while experimenting with PICO-8 sound effects: in 0.2.0i, if a silent (volume=0) row immediately before a non-silent row with an SFX instrument has the same SFX instrument as its instrument (e.g. if the user shift-clicked the SFX instrument to set the entire SFX to that instrument), even though the UI shows no difference, the program sometimes plays the SFX differently. (It looks like the effect lasts as long as the nominal length of the SFX instrument - 32 times its SPD.)

I assume this is a bug in how SFX instruments are implemented; if it's not, it strikes me as a bug in how the information is displayed.

In previous versions of PICO-8, pressing the Backspace key would consistently delete the note on the line immediately above the cursor.

On at least one occasion not captured here, Backspace deleted the effect that had just been added, rather than any notes.

This unpredictability makes it frustrating to work, because I don't know what my inputs will do.

If anyone wants to use it for anything, feel free to ask - but given that it uses all 64 SFX slots and all four sound channels for eighty seconds of music, I don't expect it to be useful to anyone in particular. It was fun to break out some of the partwriting skills from community college music theory classes again, though.

Pretty straightforward: uses the feature of line() that it will draw from the end of the previous line to connect the dots around a curve defined parametrically (i.e. x,y both written as functions of t). Uses whatever the current pen color set by color() is.

Tried to build in some basic politeness features - it resets the draw state when it's done, it sets the sign on deltat to make sure that it points from t0 towards t1, it chooses a default value if deltat is given as 0 or not given, and it will always draw a line that starts at t0 and ends at t1 whether or not deltat is an integer factor of (t1-t0). With all of those implemented, it works out to 82 tokens; cutting all of those out drops it to 33 tokens. Haven't given this a bulletproof QA treatment but it passed some basic checks.

Demo uses the parametric representation of the standard ellipse off Wikipedia.

I realize it's not applicable for all games, but would it be feasible to implement screen reader support for PICO-8? I don't know a lot about WAI-ARIA for web or anything about accessibility of standalone applications, so I don't know how such a thing is to be done, but we already have printh() commands sending data to the "@clip"board - adding something like "@tts" (text to speech) seems PICO-8-ish.

PICO-8 already does a lot of accessibility-positive things - the color palette includes a lot of nicely contrasting brightnesses and hues, the controls can already be remapped freely, carts can implement optional mouse and keyboard input - and setting up for speech reader integration would give programmers another way to make their carts playable by everyone.

We were fiddling with another project and realized that, because we were using sspr() to resize images, we didn't actually know where all the pixels were - and we wanted to know, because we wanted to cast a shadow that was the colors of what was below but in shadow. And we realized that PICO-8 lets you look at the screen in the code, and then the concept of green screen popped into our head, and then we got to work.

It's not minimized and it's not optimized - if you tell it to chromakey the whole screen, it'll chew through the entire CPU budget with change (ask us how we know!) - but I think it's readable enough that people can hack on it. We haven't tested it extensively, but we made sure it respected the current clipping rectangle and restored it before it exited, because that seemed like the correct thing to do.

(Yeah, that was really really belated. I was kind of embarrassed about the initial mistake.)

I'm not sure what's going on behind the scenes to display these timestamps but something like "Packbat updated a cartridge 9 hours ago" would be more accurate.

No big story here - I'm a big fan of the bot rain.gif and wanted to make something in PICO-8 that would produce similar images. Is configured to loop seamlessly for 8-second gifs (PICO-8's default), but the parameter should be obvious and easy to change. Rain noise is implemented in a fairly basic form (the point of the cart is generating GIFs, not a full simulation) and disabled by default.

Currently has 16 palettes, all chosen to have reasonably good contrast ratio - should be clear how to edit those as well.

Edit 2020-01-18: Added some basic rain sounds with modes for light, medium, and heavy rain - option is stored in cart data and can be accessed via the menu when you first load or through the pause menu. Should be moderately quiet.

Edit 2020-04-06: Added pause menu items to (a) reroll both palette and rain pattern together and (b) automatically wait the loop length and save a GIF that will loop correctly.

Edit 2020-04-25: New graphical effect - raindrops now vary in length and in contrast with sky, which produces a bit of an illusion of depth.

revision 1: use pal(#,#,1) commands instead of poke() commands to set colors on screen palette.

I spent a while being very, very confused about screen palettes and draw palettes, but I've started to feel like I've got a hang of it? And I decided to make a visual expression of how these work as a PICO-8 cart. 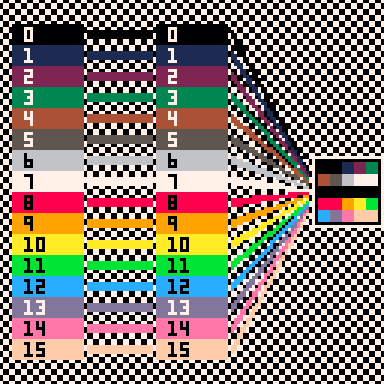 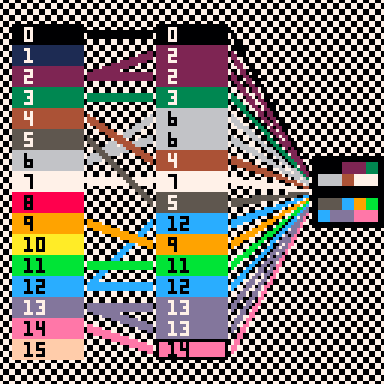 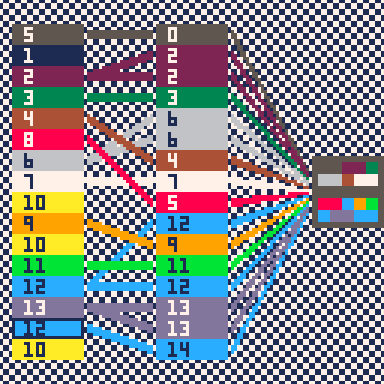 ...and the screen palette in turn can be redefined by changing the colors in its 16 slots.

I think how this is intended to be understood is:

The draw palette, for example, is a tool for recoloring images as I draw them. For example, if I have this little gray box stored as a sprite in my sprite sheet: 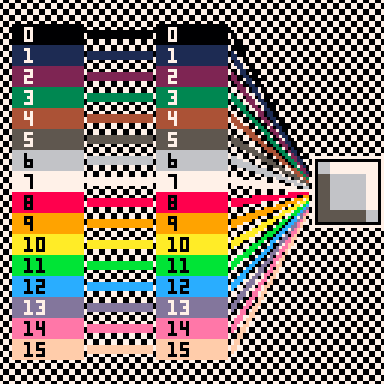 then I can use the draw palette to declare that I'm drawing it as an orange sprite instead: 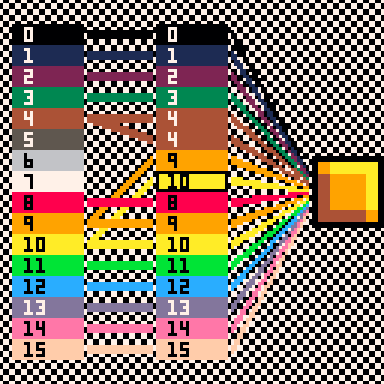 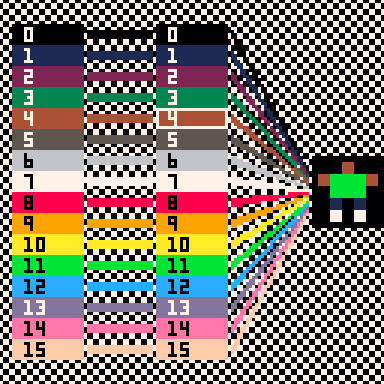 Then, changing that color represents a change corresponding to that meaning: to put the value 136 in screen palette slot 11, then, is to say that the color of the character's shirt is not green, it is red. 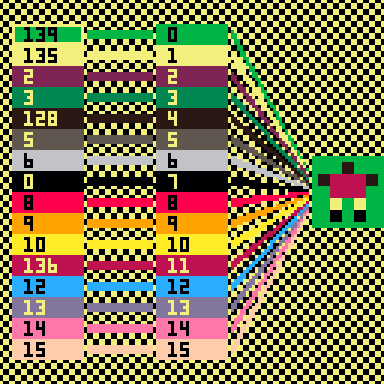 This is very long and probably well-known in the community, but I figured I'd make the tutorial anyway because I'm proud of figuring this out.

One of the things that's been very much on my mind as I've been learning PICO-8 and making my first full game project in it has been how to use the console's limited palette, and particularly how to ensure that everything I put on screen is clear and straightforward to read. It is very easy when designing user interfaces to make something that looks fine in a screenshot viewed in a well-lit room on a bright monitor by someone who knows where and what everything is, but obscure or confusing in actual play under the varied conditions which your audience plays in.

Nothing substitutes for testing, but the number one idea that I've used to try to make sure I start with something easily-read or close to it is contrast ratios - essentially, how much difference in brightness there is between two colors.

The hex codes and names for colors 0-15 I copied from the wiki page on Graphics - the names being from Roman Zolotarev's PICO-8 palette reference. The hex codes for colors 128-143 (the extended palette - see the draw state section of the wiki page on Memory) I measured myself with paint.net from screenshots, and I picked names for them using https://klaash.github.io/xkcdcolorpicker/ as guide/inspiration.

The brightness numbers and the guidelines for difference of brightness need a little bit of explaining.

The Web Contrast Accessibility Guidelines (WCAG) 2.0 have a section on the visual presentation of text and images of text. There are no guidelines as far as I am aware for purely graphical elements - how could there be? - but I use the three thresholds that WCAG2 describes as the basis for how I do this.

So: what is a contrast ratio? Click the link on the page, and it gives a formula in terms of relative luminance:

What is relative luminance? Click the link on the page, and it gives ... a collection of equations that are more complex than I want to get into, but trace all the way back to the 8-bit R, G, and B values used in sRGB color spaces, which I'm pretty sure is what most everything uses, including PICO-8. I plugged the formulae into a spreadsheet and managed to get out the contrast ratio data I wanted, which I then compared to these three thresholds from WCAG2 and used conditional formatting to display them all nicely.

...then I spent a long time thinking about how to make this easier to use as a general reference, because the difficulty of accessing information is probably what makes these things less commonly thought about.

What I've got right now probably isn't perfect. But I remembered a bit of math that might make things more straightforward: logarithms.

By recording brightness as a logarithm of the relative luminance term in the equation (kind of like how magnitudes of stars in the sky are recorded), I turn a ratio into a simple subtraction. For a pair of colors to have sufficient contrast, these log-L brightnesses merely need to differ by enough to meet the necessary contrast ratio:

...and thus I have a possible workflow: find your color in the list sorted by index, read out its brightness, add and/or subtract to calculate what brightnesses contrast at the level you need them to (a judgment call, but practice should help), and look at the list sorted by luminance to see what groups of colors at the ends of the lists hit that contrast level.

I hope this is useful to people, or at least a fun toy to explore the full list of PICO-8 colors with.

Edit: For convenience, I've also uploaded a text file with substantially the same information - probably more convenient to work with for many purposes, even if it's less colorful.