Hi I like audio synthesis and making games, Trying to learn and get better one cart at a time.

I was making a tool to help me make the font for my game and I decided to share it.
I think this is pretty much finalized... you put your font in the sprite sheet as normal like @zep's #font_snippet I took some code from,
X to save Z to swap to the adjusting view where you can nudge around each character by selecting with X.
Then when you save it exports it to clipboard as a binary string with characters 0..15 escapecoded out. It also saves it to memory in the top of the sheet so if you do it locally it'll save your progress for later.

I got rid of the extra encoding stuff cause it wasn't really helpful. now ecodes it properly and stuff.
Just paste the string copied to clipboard in your cart and your good to go. (Of course in puny mode)

I was just messing around and misnamed the directory name and when I went to go hit tab to autocomplete it instead of seeing there's no directory named that it spewed this random garbage at me. It seems to be the same data everytime except it's randomly initialized when I open the .app.
I'm on mac 2.0.5e 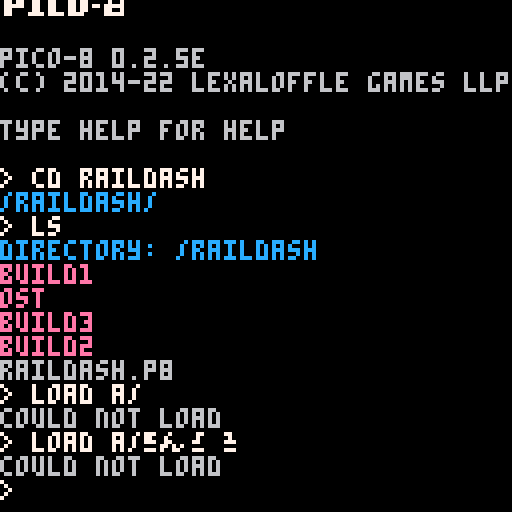 Something is awry at December Village.. Everyone is unhappy; Record time blues!
It's up to Deci to run around and use her boombox to cheer everyone up!
Talk to villagers and find songs to play, Or just take a nap that's fine too.

Kinda a mess and experimental but hope it's chill. Happy holidays!

Made for advent calendar 2022
Soundtrack listenable at: https://youtu.be/hrpIz5LfEbw

Hey so I was just doing some map work and I was using the cmd+x to move tiles around and I think when I was cutting and pasting somewhere else in the mapview tiles in the shared space it would move the sprites but not the map tiles which was . . . not good and took a while to make sure everything was ok.
It feels like this isn't intentional but I'm not 100%? I'm on 0.2.5c, thanks in advance!
(Like I said maybe this is on purpose since I'm moving the data it's self around in the shared space but in my game I was making I'm using the shared space for sprites and map and it makes it more difficult.)

I wanted to throw some sfx instruments I liked into the mix and I wanted to add the instrument I used in my world4 cover (https://www.lexaloffle.com/bbs/?tid=41981)
I think it sounds like a flute? I have no idea.
[sfx]

also here's it by it's self too.

Hope this is a good.

(Im doing this on my phone cause my wifi got blasted)

I have my game "Kikëo" Im working on and while I cant use the SAVE command to save the file cmd+s still works fine, but like I tried to do
"export kikeア👀o.wav" (thats what it shows up as.) and it just silently failed.
I checked with ls -a and it didn't save a wav but ya didnt spit a error, I have no idea or say how pico should handle names like this but like ya weird export inconsistancy?
thanks for reading this!

I'm not entirely sure what parts of the reports I should send over but both say:

I'm not sure what parts are worth reading or not.. Please let me know if there's more or like what. Thanks for reading this!

I really like this song so I tried transcribing it into pico8,
Pretty happy with how it came out. left a empty slot in case I wanted to do other variations.
[sfx]
(some stuff like the viola part or whatever that is might be a bit off but eh. remix!)

I was doing some table comparing logic like so:

And using the not operator can trip you up cause it's not testing against the whole bool==bool (I think..?)
but instead (not bool)==bool!
Anyways I was stuck on this problem for hours and I wanted to let other's be aware if they're not.
Thanks to @pancelor for figuring it out and helping me.
(it turns out I just wanted to do

I was exporting a sound for testing and I just did

And this made the file ".wav" which is great and all.. But on mac files starting with . are hidden..
So I'm not sure if this is a issue or not but I had to check if it existed with a ls -a
And I guess I'll go delete .wav and .png that are just sitting around...
(Oh! and also forgot to mention since pico takes this . hidden stuff for .DS_Store and such into account I couldn't find it with ls either.)

A short arcade game thingy that kinda was a mash of Pacman and adventures of Lolo. Made for ToyBoxJam 3.

One day at work a mother comes in and says she's lost all 40 of her kids and 'requests' help. Dodge toasters, Snakes, and more and make your way back home.

Made by SmellyFishstiks
Pathfinding help from Luchak

So I was moving my levels around and part of the old section remained after being moved?
Thinking it was a weird byproduct of it not being on screen with the sprites in the way I tried again and nope :?
And I just tried again now and only a 16x1 chunk on the bottom was left...

Sorry for bugging you with bugs again @zep ;\

Hey @zep not to bug you too much with bugs I keep finding but in latest version when I put "ノ" in a error msg and tried to copy it to clipboard (On Mac so cmd+c) it failed and just replaced my clipboard with \0 or empty or whatever (correction: kept clipboard the same. did not over write it with a terminal or whatever it's called.), I assume this isn't supposed to happen? wonder if it's a issue with ノ being utf8 or whatever.

Anyways thanks if you read this, sorry to bug you... for like the 3rd time with bugs

Hey I was making my game, (Some of the special chars are from/for that.)
And decided to share the font.

This was my first time ever drawing the hiragana and katakana so.. they maybe aren't great but ya.

This cart just pastes the font's data into your clipboard to be poked like @zep's cart.

Probably will keep tweaking it as I use it more but for now here it is. feel free to use it if you want!

A Cover of the Beginner's room theme from Super star that was later remixed in Air ride.
Used Name registered's (https://www.youtube.com/watch?v=-zB6T_WgGqI) piano tutorial as reference.
Had fun making this, Hope you enjoy.
(Oh ya and lastly please credit me if you end up using this or whatever. Thanks!)

@zep
This problem has happened to me multiple times now where I'm doing music in the sfx editor, (and the pattern editor maybe?)
And I hit cmd+r.
Pico-8 crashes immediately and I've checked my backups folder to find this time nothing was saved...
I'm not sure if it's because I don't have any code and I just made a cart to do music in, and it doesn't happen all of the time when you run, but when it does happen it crashes and you lose everything :(

I'm not sure how to recreate it but if you could find it please squash this bug/crash, thanks.

Cover of world 4 I made from Super Mario Bros 3.
Not perfect but like how compact and the juice that buzz adds.
[sfx]

Hey I made a galaxy map thingy where you can look at a galaxy and read-up on aliens I guess.
not much to it but here

Hi! @zep I was wondering if we could have more ways to make the pico-8 code editor more customizable.
I think it would be really nice if the color-highlighting syntax stuff was changeable for what color it would display it as. so if I don't want numbers to be blue I could make them green etc.

this also goes for the background color which is changeable already but it would be nice to have some more options with that. (I really like the dark green background.)

Other options to change color syntax would be nice like function calls() being a different color from vars as well.. (maybe some other stuff too I'm not thinking about..)

Anyways it would be nice if you could make the code editor more customized to how you like to code, and having all of this be some numbers in the config file would be awesome!

For example if the function call stuff by default was still lightgray it would be nice to change that to be different. so even stuff that's the same by default could be changed if people didn't want it that way.

Anyways Here's a example of what I was talking about; if it isn't to much work I think this would just give more options to how people want to work in pico-8 without changing pico-8's editor by default at all.

Thanks for reading this! ^_^ (not sure if #bugs was the right place to post it but here) 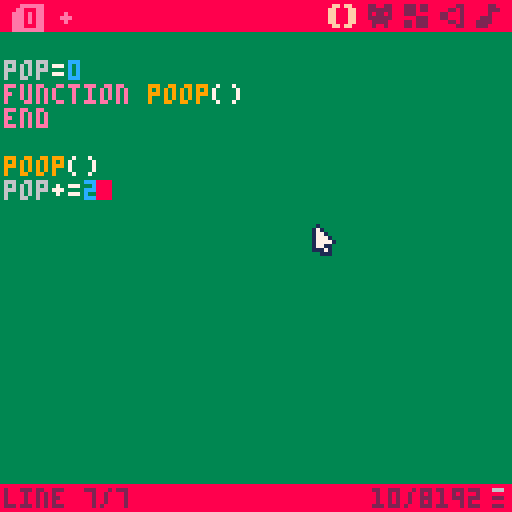 (PS: If anyone reads this in the future I want to say that the idea of handing syntax highlighting colors, or really just the colors used by the IDE off to the user is incredibly stupid.. or at least over kill.
I don't want this any more... Still want that col3 bg but ya I retract this; wth was I thinking?)

so I was messing with a little tweetcart esc thing;

PS: anything after a goto is gray for some reason even with spaces now that I think of it