I entered my first game jam and did my first collab with amusician. Find it on Itch.io
This was made in 3 hours.

Press ⬅️➡️⬆️⬇️ to move and jump

Press ❎+⬆️ use your jetpack

„Beware! Capitalist children want to grab you off the shelf. Use their money against them and hire other toys to fight back“

Shelf-Defense is a genre mix with tower-defense and platformer elements made in Pico8.

AMusician made his debut with this game as his first ever published game!

Published as part of the 3 hour game jam trijam172 „off-the-shelf“.

Hi everybody!
There is a game that is near and dear to me, and i always wanted to demake it. But because I´m scared of lawyers and publishers, i never did. I made a completly new game, and any resemblance is merely a coincidence.
I hope you enjoy, let me know what you think.

You are Gordan Teeman, an experimenter in sector D of the Black Laser Research Facility in New England.
Today is a big day, you are taking part in a monumental experiment. Let´s hope everything goes according to plan. 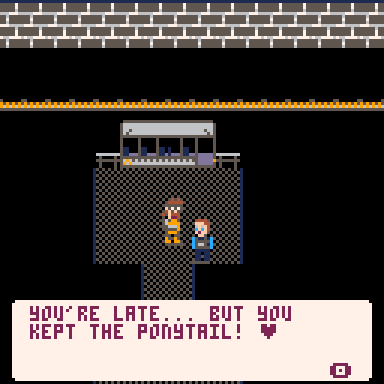 Hi everybody!
I'm definitely NOT making a Half-Life demake and i need some help with SoundFX. I´m sure some here are familiar with the NOT Source material, i want to nail the sound effects in pico8-scope. Just post them here and I'll be sure to credit and thank you.

It´s NOT going to be a quick summary of the events in the Black Laser Reserarch Facility through the eyes of Gordan Leeman.
I´m still looking for perfect step sounds, weapon change sounds and enemy grunts. And of course any help is welcome, if you got more ideas. Thank you very much <3

UPDATE 25.3.22
-removed a bug where the speed wouldnt reset for a new game

Feature Creep has stopped me from finishing games so I started making some classic games. This time: TETRIS
It was fun, and it was nice overcoming the challenges this game brings. 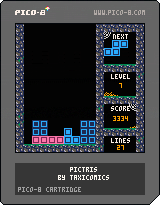 UPDATE 3:
Fixed the bug where you could fall so far beneath the level that you would never collide with anything. Thx @Mot!
UPDATE 2:
Holy diver, dear game, please let me be. Sooooooo. I HAD to reintegrate the difficulty ramping, and i figured i have to explain myself a little better.
This is my first attempt at a tweetcard. It was completely unexpected for me, but i enjoyed optimizing A LOT!
I learned how to shorten if statements, prints and everything else from the great articles people wrote about tweetcards.
Press X to flap,
beat my score of 33.
Oh yeah, and its 278 chars now :)

UPDATE:
Ok, the critic won, i remade it to be tweetable, i preserved the highscore but had to axe the difficulty ramping.
Thx for any suggestions to further enhance!

Original Post:
I tried to make flappy bird in under 500 chars.

Have fun and suggest ideas to push it sub 400!

I made a silly game based on my friends idea of stringing together delivery missions and added a timer to it. Trade your way up to a kitten as fast as you can!
Randomized on every replay.

Have fun and beat my best time(40,666 seconds) for the first level(which is the only one that stays the same)

I love the original game and the genre it has kicked off. So for it´s anniversary i made a Pico8-Version that you can play with two people. I used AFBUs great raycasting engine(https://www.lexaloffle.com/bbs/?pid=13195#p) and modified it a bit to fit my needs(mainly being a splitscreen game). I´m still working on incorporating sprites, but we´ll see wether i can figure out the math in the future. Any help would be appreciated!
Use X in the Van to equip the different tools and write down your findings in your Journal (press O)

Have fun, tell me about your sightings and feel free to modify or add levels!

Hi everyone!
I made a drum sequencer intended for live use. It has control over 4 channels (kick, snare, hihat, tom) in 32 steps.

Use X to toggle a slot or a setting, use O to change from the grid to the controls. The first control slot is play/pause, slot 2-5 toggle the 4 channels on or off, + and - control the BPM. The BPM is rounded, let me know whether you need accurate BPM.

If anybody has an idea for different drumsounds etc. do let me know but for now- enjoy!

I made a sequel to my first game ever "Seeking The Beast" from 2008.
You are trapped in a valley where a Beast has gone wild. It created havoc and it has to be slain.

My best time was 10:15 Minutes. Can anybody beat that?

Let me know what you think, and have a great day!

Update: Added a Speedrun-counter and explained the ending better 15.8.21

A game about the poor person who has to clean the office in between deadly shootings in CS:GO.

Wash away all the blood stains with X and try to win 5 rounds.

This is my first project on Pico-8, so please be gentle. It is a speedrunning ghost-hunter game, not unlinke Phasmophobia.
Your job is to identify the ghost by looking at what it does. You got an EMF-Meter to check for electromagnetic fields, a book to let it write in, a Spiritbox(Spibox) to hear it talk and a Camera to check for Orbs.

Have fun and let me know what level you reach!
Oh and by the way: This can be played with two people.