I sometimes make small games. Pico-8 is my heaven and modding is my stairway.

Say a player has a way to design a custom painting in a game. This painting should persist between playthroughs, and be stored on the spritesheet.

I know that this should be done via cstore(), but I simply do not understand how.

What I actually need is the values for A and L.
Cheers in advance.

Decided to make a game about exploring a bunch of islands. Obviously needs a lot of work, but it's a start.
Hold S or (<) P2 to see the map.
Use P1 arrow keys to move.
Hold X or (X) P1 and press any of the P1 arrow keys to place/destroy a platform on water.
To do:

Copy and paste the snippet below into your HTML.
Note: This cartridge's settings do not allow embedded playback. A [Play at lexaloffle] link will be included instead.
P#95235 2021-07-24 11:40

Decided to make a little 64x64 RGB display. 64 colours in total, which means 64x64x64. Neat.
Anyways, yeah. I've messed around a bit, and found some interesting colours. This probably won't be used at all, but it was fun to make, and I'm proud of it.

Mark as Spam
Palette Arrangement: The World
by wallgraffiti

Decided to arrange some of the colours from the 32 colour palette, and this was the result. It consists of four gradients. Every colour has been named by yours truly to give some inspiration to the uses, but you can really use it for anything. If you use this for anything, please comment here! I want to see what you create with the colours.


EDIT: Due to SPLORE attempting to preserve explorer colours to keep visibility, it has sacrificed some of the colours in the label preview on native PICO-8. Not a bug, but I'm saying this just so that people don't get confused.

Before I explain exactly what this is and why it exists, I need to explain the history behind it.


Some of you may have seen the (relatively small amount of) attempts to implement a BBS-type system by taking advantage of the General Use Memory region and it not being cleared by load(). It fascinated me when I first came across it, but I eventually forgot.
Recently, I came back to the concept with a new idea: static web pages. General use memory can contain 4864 32-bit numbers if not using the custom font, which is more than plenty for a page written in a simplified markup language. We can take that even further if instead of using each number as a single character, we split the 32-bit number into 4 8-bit numbers, resulting in 19456 characters.

The first step for me was designing the simplified markup language. I decided on something I call PPML, Portable Pico Markup Language. The syntax is the following:

I decided this was suitable and moved on to the next part.
This next part was the renderer for the PPML. This is what you see in the above cartridge, displaying a demo page. The renderer consisted of a list of tags with rendering functions, a Global Render table and a Frame Render table. The Global Render contained persistent stuff like the background colour, while the Frame Render contained things like the cursor position for text. This then took the PPML, contained in the first tab, and processed it into a table for easy use. The _draw() function then simply looped through this content table, calling the tag render functions with the necessary arguments.
It's a simple method, but works pretty well.

The next step would be the networking; loading the cartridge, processing the data it left in General Use Memory and converting it into usable PPML. Then that can be fed into the renderer, and you can see the page.

Of course, this renderer is a proof-of-concept prototype. A lot more tags still need to be added and hopefully a very simple scripting language.

When all this is done, I hope to have a fully functioning browser which would let you browse the PicoWeb and maybe play some small games on Newgrounds-esque sites. But, we can only hope.

Feel free to leave feedback on the renderer/game plan!

I decided to make a simple class implementation. Here's what I managed to come up with:

The (preferred) syntax to use this with looks like this:

The output for the above would be:

Here is the cartridge containing the above example:

Feedback would be nice!

I've decided to make a horror shooter. This one has easy to expand multiplayer. Just add as many new_player() statements as you need!

So, as most of us know, .p8 cartridges consist of sections. lua,gfx,map, etc etc. Well, I found this other section named gff. I just wanted to know what it did, since it doesn't seem to directly correlate to anything you can edit. I'm just asking since I'm making a cart generator in Python so I need to know if gff is an important memory region.

So I've just been thinking: wouldn't it be much more convinient to be able to "push" a new version of a cartridge to the BBS?

So I came up with three concept commands:

First, the login command. The syntax would be as follows:

The screen would then be cleared and a login request would be sent to the BBS servers. If all goes well, then the login would be remembered until you logout. This would allow for things like viewing favourited cartridges and seeing them stored on other devices and on the BBS itself.

"LOGOUT" is self explanatory.

Now, the push command. It can only be used when a cartridge is loaded in memory. The syntax is as follows:

CARTID being the normal ID, without the version(so "cart", not "cart-0" or "cart-1"). This would then execute the following steps:

This way, small modifications won't have to include going into the browser at all.

This would be a blessing to me.

I was listening to Missile Command's music, and really liked it, so I decided to export it to a .wav . I selected patterns 0-19 and, in the terminal, type the command:

The result was, indeed, a .wav file, but played around a quarter of the first note of pattern 19. That's it. I'm quite annoyed since the menu music in Missile Command is very good, but that's not the point. The point is there's a bug.

Another season, another terrain generator.


Below is an old version of the pipeline that was used for the generator. This has since been reworked a bit to add features.

Tada! You've got yourself a basic map. You can also disable the "terrain" boolean to make it just generate a voronoi diagram, but that's boring and I don't need it so I leave "terrain" as True in the above cart. Feel free to play around though.

Here are some examples of pretty islands: 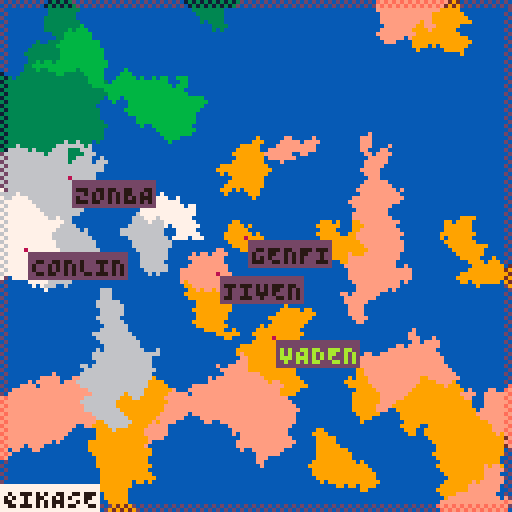 P.S. v1.2.1 has introduced "Manual Mode". At any time in the generation process, you can press Z. When generation is over, you should see that the name of the landmass and the names of the nations don't show up. This is so that you can hide either. If you want the name of the landmass to show up, press Z during Manual Mode. Do the same for nations but with X instead of Z. This should let you have more versatility with my little toy.

Since v1.2.2, there is another syllable type, generated separately: VV.

Have fun doing deranged things to the island generator. I hope that was a comprehensive list of notes.

I know this is kind of lazy, and you could just loop over a table with "pairs" and collect all of the keys, but is there a built in function that will return a table of any given table's keys? If not, then I'll implement my own, but I don't want to waste tokens where unnecessary.

So, I'm making a game as a birthday present for my friend. As I always do, I forgot to do it before and am sitting here on the day before. Now, this game is tile based, and I need to mass generate some tiles which do the same thing with different values. Here is a simplified version of this problem:

My question is, will this work, and if not, how would I go around doing this?

So I was working on a random visualiser thing, when I realised, uhh,

I've never seen the sprite counter in hexadecimal, and don't remember a feature like that being announced nor me toggling it..

I think this bug exists because @zep might have been a bit lazy when coding cursor changes for code tabs, so instead of checking if there's an actual tab in the position, he just made the cursor change when it is in a certain square where the tabs could be. To be fully honest, I don't blame him. Most of us here are programmers and you can't say you never get lazy with something in code.

TL;DR: Cursor changing doesn't check if tab is actually there.

Got some random inspiration from @thattomhall's "Who stole the coal?", specifically the graphics, so I decided to start my own little thingy. It uses Screen Mode 2, for those who are curious.

You are Unnamed Wizard, and you're hanging with your friends, when some Big Bird King who calls himself "Haponke" swoops down and steals your wand! Now, according to WizTown law, all who call themselves "Wizard" and don't have a wand are outcasts and should have their backside kicked into the Great Beyond. You know this, so obviously, you RUN!

On the way out of WizTown, you find a strange, L-Shaped, steel thingy. Carved on it, are the words "GLOCK-19".

Don't have much yet, but I hope to release a demo soon!

I wanted to make a space game that looks like this, but eventually gave up and just made it a visualisation of the first four planets of our Solar System. I think it look cool, and am especially proud of the music.

Enjoy watching the rock spheres spin around and around. I sure did!