These changes should help those who had trouble with the original version, and hopefully make it less frutstrating.
The medal rooms are not affected by the difficulty, to make sure they remain an optional but tough challenge.

My first PICO-8 game !
It's a tiny "metroidvania" platformer where you play as a cube.
You gain more and more abilities as you progress.

There are multiple environments, some collectables and you can find a boss fight at the end.

If you run into a bug please report it so I can try and fix it.
Feedback is also appreciated :)

I hope you enjoy the game !

Great job! I really enjoyed it. I like the fact you have to activate things and then retrace your steps to proceed. Animations on the cube were a nice touch.

That was great! I really love the feeling of the game and the atmosphere of it! This one is among the best games I’ve played on pico-8. I just wish we had some kind of pico player for iOS. This browser player just don’t work for me.

Awesome game! The controls were great, and the puzzles were designed well (I especially liked the lava area). The boss battle was really cool too, and reminded me of SMB3 a little. I couldn't get the 5th medal!!

Haha I couldn't get the 5th medal, either. Issss it possible?

I liked the game, though. The part I had the most difficulty with was definitely the lava room where you need to avoid spikes, and then avoid cannons in the next room before you get to a checkpoint.

To be honest I kind of expected people to have trouble with this room ^^'
I admit it's quite difficult, I couldn't bring myself to make it any easier ^^'

If by "the fifth medal" you mean the medal in the snow level then yes, it's definitely possible :)
You need to anticipate the horizontal cannons and then double jump as fast as you can.
I can upload a video playthrough on YouTube if people are having trouble with the game

Thanks a lot for the feedback !

This is lovely. I struggled to play wel on my phone, but will try again on PC. Nice little game.

So frustrating but really good level design. Just beat the final boss with a rather pleasing 256 deaths. Fuck those last couple of spike rooms.

Final stats for the first play through: 81 Deaths, 5/5 Medals.

A little more coyote time would be appreciated (an extra frame or two before stepping off a ledge uses up your jump), and some things required crazy precision (I'm looking at you, Medal #5), but overall nice work, especially for a first PICO-8 game!

The sprites were good, the mechanics worked well, the jump sound never got annoying, and I like the little cloud effect on the moon.

Really enjoying the game so far. I love the levels, and the animations on the cube are a great touch. I am stuck though. All the way up to the left, then down the spikey drop area past the 2 springs, You walk up a terraced area into... the wall at the top left of the starting room? I have gotten 2 medals(the first one, the second one right outside and up from the room that turns on the springs), the double jump, the dive, and then I can't figure out where to go because the only place I haven't been takes me to the starting room. I'm probably missing something obvious, but I just don't know what.

Thanks again for the feedback :)

I updated the game to version 1.1
It features an optional "easy" mode, hopefully making the game less frustrating.

@Pastellain
Between the spikey drop and the starting room you can find some weak walls.
The dive allows you to destroy them.
Hope it helps ;)

(version 1.1 makes it easier to tell them apart from regular walls, if that helps)

I really enjoyed this. Fun little metroidvania. I enjoyed getting the medals too - its nice to have something 'just for fun' in one of these games. Boss battle was nice too! I normally object to games where the hero is a cube, a box or a ball - just seems lazy - but the hero had a nice bit of personality and a cute jump, so I could get into it.

Minimalistic, but still fun to explore! I liked this alot.

I see it now!The lava levels are great and the last medal is so challenging! Great game!

This was pretty fun, but the difficulty was all over the place.

Nice game! I really liked the room design and the short backtracking. too bad I suck at platformers with inertia :_)

I had some fun with this. Got 4/5 medals in my first playthrough, might try it again later.

There is no archiving system?

This was great! The platforming wasn't 100% precise, but it was tight enough that I was able to navigate some pretty tough areas without much frustration. Great job! :D

5/5 My team and I all played it and loved it! Thanks for keeping us all un-productive :)

I really enjoyed this game; played it in the living room on my Pico-8 pi. I didn't find all the medals but I did find and beat a boss. Is that the only boss? Great job.

It's one of those games where after dying constantly, you always feel you'll get it on the next try. First playthrough 185 deaths, 5 medals, using keyboard on normal setting.

I really like the subtle refinements like adding a squash and stretch effect while jumping. Just as a minor critique. When something is squashing and stretching, it should always keep the same volume as it's original form.

This is a good article on squash and stretch: http://blog.animationmentor.com/squash-and-stretch-the-12-basic-principles-of-animation/

This issue becomes tricky when using such low-res sprites. It's not really a big deal or even too noticeable in your game, just some friendly advice :)

Good game!
It made me want to smash a brick over my laptop in places, and that's a good thing!
Took 334 deaths and a lot of sanity to beat the game on normal with 5 medals.

This is really fun, the only thing that bottered me was the spike hitbox. It felt like I died a lot only touching the transparent part of the sprite. Maybe it's my imagination. Anyway, great game.

Was really great! 5/5 Medals, may have bugged the text cause I died while I beat the boss lol

Wow, I am definitely no good at these busy busy platformers. Can see a lot of heart and soul went into it though, you definitely get my star.

What are the differences between easy mode, normal mode, and the coolmathgames exclusive hard mode?

Thank you all for the comments and stars, I'm honestly surprised by the amount of feedback my game has received.

Here's some explanations :
The collision relies on sprite flags and isn't very precise. The programming, honestly, isn't great ^^'
I didn't know how to create objects in Lua at the time.

The coolmath version was made slightly easier, and the difficulty modes were renamed (easy became normal and normal became hard). So hard mode is actually just normal mode with a different name.

I loved this game! I also thought the medals were required, so I guess I beat the game with a perfect score???

Thought I would take another crack at this. Thoroughly excellent little platformer. I'm no good at these but did manage to win on EASY with all but one medal.

Great, fun game, espically for being your first cart. All 5 medals were taken. You get a star.

So I managed to die on the same frame as I defeated the boss and it caused the cutscene to glitch a little bit... This game is pretty good though! Beat in normal mode with 76 deaths and all 5 medals

5 medals, 91 deaths, and a good 15 minutes of stupid mistakes on the final boss later, I very much enjoyed this game =) I feel like checkpoints could be a bit more liberal, especially around certain challenges, and there were some areas where a map would have been very helpful in remembering where I needed to go after getting a new powerup, but overall it was fun to play and a well-designed level. I'd love to see a more fully realized version. Cute character, too ^^

Thanks a lot to all those who played the game !
A new version has been uploaded which fixes certain bugs and includes a new hard mode, for those who wanted a tougher challenge ;)

What a nice game! The challenge was just right, the map being not too big that it’s impossible to go back to find what to do next. Got very close to getting the last medal!

I really enjoyed playing through this. Like a few others have said about checkpoints, the only area where I felt there needed to be a checkpoint was right at the start of the snow section. There wasn't an obvious 'last checkpoint' at that point and it made me think 'maybe I shouldn't be trying to go here yet'. I love the art style and the boss at the end was cool too, it was nice figuring out that the dive ability also worked as an attack. It'd be nice for there to be some more music in this to set the mood and tie things together more. Anyway, really cool metroidvania game, much appreciated :)

I made a sub-reddit https://www.reddit.com/r/MetroCUBEvania/

This was amazing. I got all the medals just to make everyone happy.

Very great game. I also turned the entire map into an image (it uses the normal mode) 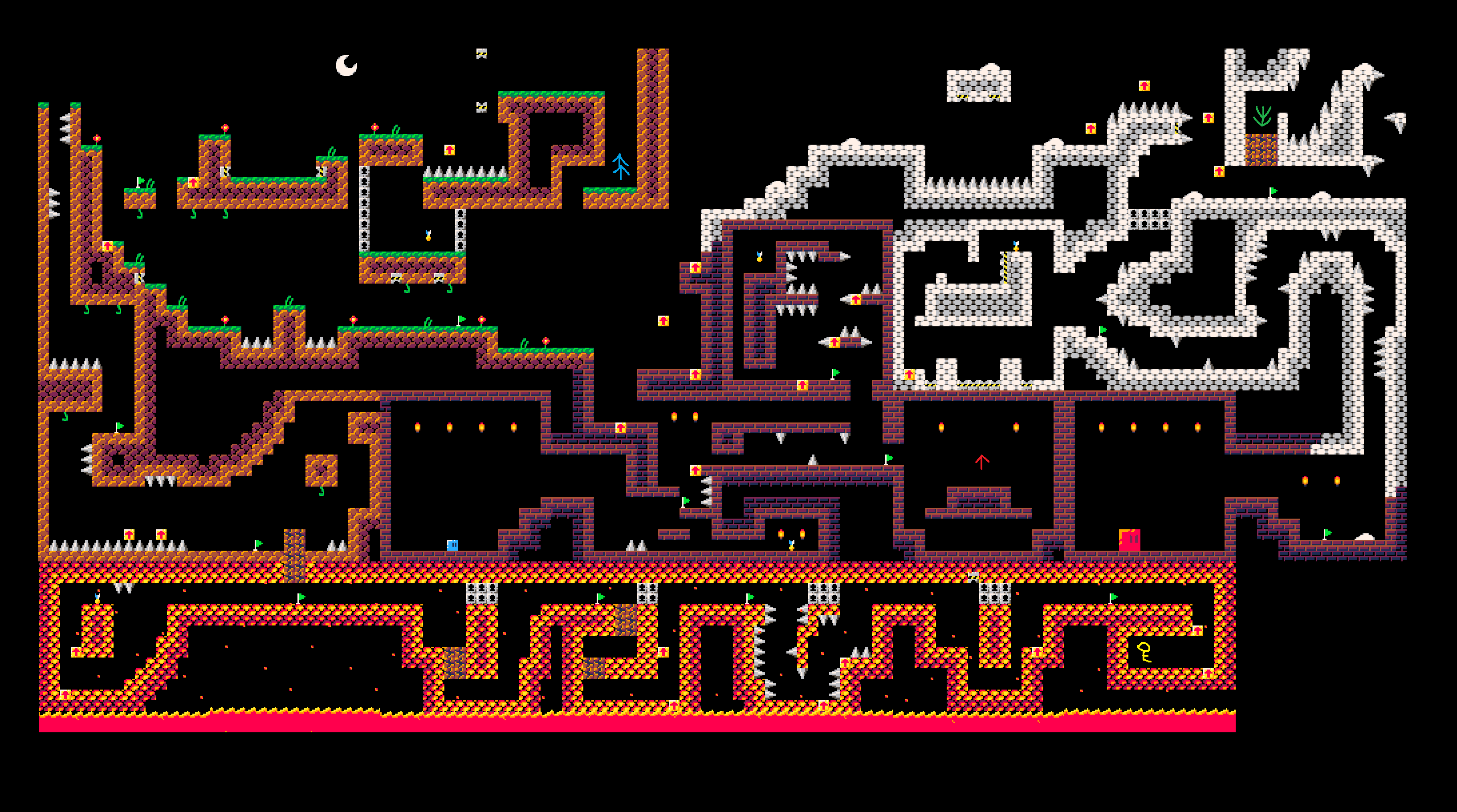 Just re-visiting this classic cart. This is such an absolutely perfect yet simple game and ever so rewarding once you get the timing of the jump mechanism.

The level / room design is ever so good. For such a simple idea and with such basic graphics you have made something so compelling. Bravo!!