This update is focused on resolving runtime issues, with a couple of small but handy features thrown in for good measure:

To grab 32 random cartridges from the BBS, there is now a 'Lucky Draw' list in SPLORE. It is more likely to select cartridges that have more stars, but even unrated carts have a decent chance of appearing. Perhaps this will be a way to unearth some undiscovered gems, or just to find something new to play without scrolling back through several years of carts.

The list is cached, so it only changes every 2 minutes or so. But you can keep paging through the list to get new items forever.

Select some text in the code editor to view how many characters or tokens are contained within.

The shorthand version of print (?"hello") used to require no preceding statement be on the same line, but you can now mix it with things like the shorthand IF statement, as long as it is the last thing on the line:

Thanks to @Liquidream for suggesting this. It should be handy for things like tweetcarts and PICO-1K Jam (which coincidentally is also organized by Liquidream!) 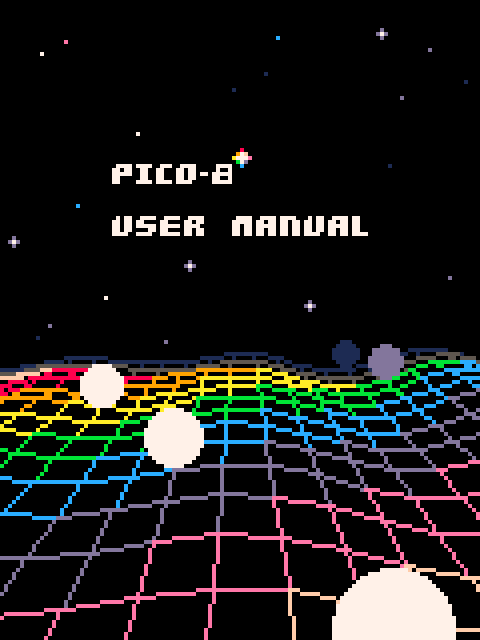 The PICO-8 Manual is still a work in progress, but it went through a large update last month, with new formatting, dark mode, linkable headers, and more printer-friendly. You can find it on the resources page:

The changelog has been separated into a text file here:

The pico-8.txt included in the distributables has changed to a short version that links to the online manual, but later on I'll bring back the full ascii version and keep it in sync with the html version.

This isn't a very useful feature unless you are manipulating PICO-8 cartridges with external tools, but it has always irked me that it is not possible to write 32k of PICO-8 cartridge to a file that is 32k!

tostr() and tonum() now take format flags that make it easier to deal with large numbers.

PICO-8's numbers are all 16:16 fixed point, which basically means that every number is internally stored as a large 32-bit integer that is divided by 65536 to get the value in Lua. So for example, if you want to use that large integer for something like scores that need to go above the usual maximum of 32767, bit 0x2 can be used to display it in the raw integer form:

To add 10 points to a score stored in this way, you'd need to shift it right 16 bits:

0.2.3 contains two changed to cpu costs which does not effect many cartridges:

Next up for PICO-8 is a 64-bit Raspberry Pi Build, and also a preview of a web version that is also handy for running PICO-8 on Chromebooks. I'm also still working on online scores, which required developing some bespoke infrastructure that is optimised for PICO-8's usage patterns, and can handle traffic from exported carts without needing to start charging for PICONET subscriptions or anything like that. I'll test it next month with the release of https://www.doodlemud.com, which is a multiplayer drawing game designed to battletest PICO-8's backend before exposing it to precious cartridge data!

Oh my oh my, I am very much excited for this!

very glad that the 0x808 audio lowpass filter can be optionally turned off, i actually like the crunch of the high frequency artifacts

Thanks for another great update @zep! 🤓
Many thanks especially for the quality-of-life improvements for #Pico1k jam and #Tweetcart's, etc. 🙏

A Webversion !!! YESS!!! This way i can use Pico8 soon on my Samsung Tablet TabS6 and Keyboard on the go!

.rom question - is the goal to have 32k data carts or only as a convenient way to generate carts (without the $ù@@## sfx/music format?)

correction: reload does work with p8.rom files
feature request: ability to reload the full 32k of a p8.rom files (now possible with 0x8000 region)
(should multicart games be limited by size rather than number of files?)

@freds72 .p8.rom is only supported by LOAD/SAVE.

I was imagining only using it for authoring single carts, but yes -- I suppose it should really be treated the same by CSTORE/RELOAD. I'll wishlist that for the next update. I'd like to keep the code vs. data section rules the same though (as oddball as they are), so it won't be a way to get the full 32k as readable data.

I have a problem with some code that worked up to the previous version:

ord(stat(31)) always returns null but was returning the correct value before.

It works if changed to:

Hi @zep, thanks for the update!

Could you perhaps support .p8.rom via commandline "-export" like .p8.png?

I'm new to PICO-8 and I find SAVE vs EXPORT slightly confusing, eg. you use SAVE to write a .p8.png cartridge, but -export to do the same via commandline.

Just a suggestion! Useful for scripting and external tools.

So excited for the web version!! Thank you zep!

@freds72 It looks like you messed up the order of the arguments to reload().

Touk> it used to be clearer: we used 'save' (in the console) for the cart itself (P8 or P8PNG format), and 'export' for bits like the spritesheet or a music track.
HTML and native executables are also 'export'; in a way it makes sense that it’s not 'save' because this is compiling to a format that can be distributed but not edited, so 'save' is for pure carts and 'export' for derived things.

Now on the command line, there is no option for saving, so all operationes use '-export', even though it can be used to create pure carts in P8PNG or P8ROM format that can be loaded and edited again!

Looking forward to the online hiscores feature. It will give a new lease of life to a lot of existing Pico-8 games. 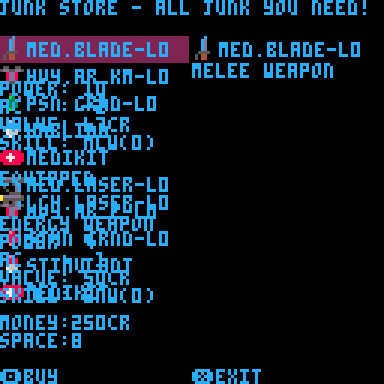 This works with 0.2.2c version but the same code give me this issue with 0.2.3.
Thanks to @zep for pico-8 that allways remain a great program :)

Yep, I found this version of Pico-8 does indeed NOT run some of my carts correctly as they ran before, @ViperSnake75.

Also if it's ideas people are after, I have several:

While a good number of these ideas have been read and implemented by @zep since my initial request of them 2-years ago, glad to be of service, there are still several I think are also good ideas still in the list not yet done.

Of course pinnacle to all of this would be the ability to compile your .P8 to native Android/cellphone format of APK or OPK as the case might be. Some of the competing Fantasy Consoles have this ability already so it is not an impossibility. Of course I would never leave Pico-8 and am always delighted to see each new version @zep produces.

I am so excited!

Nice! Relatively new to pico-8, so don't know about all of the bugs other people are talking about, but I'm excited to see what else @zep adds!

And yes, I've already been utilizing live token count to my benefit. Thanks!

Is Pico 8 and the other 2 fantasy consoles always going to be paid? Because if you can run it on the web, is it a custom link so you still have to pay for it?

What's the purpose of this?

@zep Dude! All of these updates are awesome!

I'm kind of excited about P8.ROM. It might motivate me to see what sort of tools I could put into making cartridges, now that there's an easy way to export cartridge data and make it accessible to other programs. Great feature!

Thanks for all your continued effort!

I just installed pico 8 on my stock pi400 and it runs slowly. When I start pico8 -show_fps 1 the fps counter in the main boot screen is only 16 to 18!

Is it supposed to be this slow on what is basically an rpi4?

Can I do anything to make it faster? I thought it should run in 30 fps!

Also I think pico 8 should output a warning if it cannot maintain spec fps. I thought that is the whole point of the fantasy console that it has fixed spec and is the same everywhere. If you allow it to run with reduced fps, then everybody is getting a different experience.

If I run in a window on my pi400 I get almost 80 fps. If I switch to full screen it goes down to <20 fps!!! How can the simple act of scaling which should be possible with zero overhead using the gpu, habe such an enormous and embarrassingly bad effect on fps?

It works. The fix is to start “sudo raspi-config”, go to advanced and set the gl driver to “legacy”, now I get 80 fps in fullscreen.

Another problem: screen tearing in lots of games. Is there no vsync on/off option? How can people stand this?

anyway you should start a new thread, unless this is directly related to this specific release

i found a bug
whenever you ctrl-x patterns in the pattern editor, the patterns appear to be empty but music() thinks that they're filled with sfx's 1-4

Thought I would add this, @zep. Current Pico-8 does not show the standard touch keyboard when requested on either my Android or cellphone's P8. I didn't know if there was a way to fix this.

Adding LOAD/SAVE state would be epic I believe. If that "state" could be converted and read/pasted to and from clipboard, pointing out errors in existing games would also be that much easier. No need to post a picture. Just get the game prior to the error. SAVE STATE. Copy that save state as HEX to your message. Then when the message is read later, if that "state" is clicked it jumps to that game right at the exact position they saved it at.

Then it's a simple matter to take a step forward or what have you causing the error to appear - greatly increasing pointing out bugs and errors in existing carts.

Thanks Zep! Does the (not) PICONET thing provide a backend for online multiplayer PICO-8 games? Or is it more a replacement to BBS as the backend for SPLORE, or something else? (Personally I'm hoping for the first one)

zep says he does not want to charge for an hypothetical piconet.

Online scores are supposed to have level ID, score, data (512 bytes), and (implicit parameters) game ID and user ID (from explicit login, handled by the console). They should be usable to add some online multiplayer for limited turn-based games, but not real-time or MMO. Also not a replacement for the bbs.