Hi! This is a playtest of a single level of Crunch, an RTS I'm working on. Let me know how you fare in this one level demo. I appreciate all feedback! I'm trying to create a fun, fast-paced RTS game loop that I can then attach roguelite meta-progression onto.

Hi! Do you have 99 seconds to help me out by playtesting this?

I'm trying to make a space RTS game. This is a test of a user interface for it which uses the standard pico8 controls, no mouse. I don't want to give any instructions - Please leave a comment if you figure it out, or if you have trouble or any questions. Thank you!!

Hi, this is a game in the style of the Gameboy game Resident Evil Gaiden.

It's a work in progress, let me know if/when you get stuck or confused.

This is an autobattler game like Teamfight Tactics, DOTA Autochess, or Super Auto Pets. I've tried to pack a lot into the cart - 26 heroes with unique abilities

Buy heroes (3 gold each). Your team size is limited but increases each round.

Reroll the shop for 1 gold.

Money doesn't save between rounds, but the shop cards do.

If you buy a duplicate hero, it will merge and gain +1 EXP. Enough EXP makes it level up, improving its stats.

If you press UP in the shop screen, you can move heroes around and view info about each hero.

In this BBS version you fight against random AI-generated teams, but in the multiplayer version you play against teams created by other players! Try it here: https://morganquirk.itch.io/tiny-champions 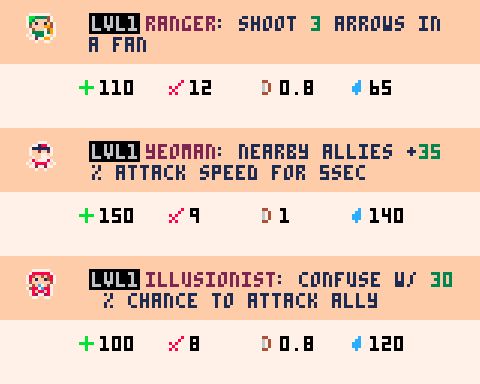 7/4/22: Added a confirmation box if you try to end your turn without spending all your gold. Balance changes to nerf healer, usurper, and buff mesmer, zealot.

Let me know what you think! A demo, 15 levels, no sound or music yet, working title, etc.

A simple demake of Rez for the Dreamcast. Just a one-level demo. Give it a try!

FYI: You can target up to 8 enemies before firing. More targeted enemies = higher score.

Two-player coop game on the bridge of a space battleship. Work together to loot and destroy all the alien ships in each level.


Each player operates their own screen - Player 1 on top in red, Player 2 on bottom in blue.

Best with 2 players. Feel free to try this out without a partner, but it is extremely difficult to play both screens at once!! Get a friend and try it out. Communication is key!

This is your status bar - From left to right it shows the state of your 4 directional shields, your hull health, how much loot you've collected, and the most recent signal that you've intercepted from an enemy ship.

From any screen, press Z to go to screen select:

UP/DOWN/LEFT/RIGHT to go to the MAP, POW, WEP, or HAX screen.

Downloaded Cores work just like regular power cores, but are lost at the end of the level.
Later in the game you may unlock QUANTUM CORES, which have a special function depending on which system you put them on.

UP/DOWN to select weapon
LEFT/RIGHT on PHASER to adjust angle (See clock angles on MAP screen).
X ON PHASER to fire.
X ON MGUN to lock on to a target when the green cursor is right on top of it. MGUN will fire continuously once locked on, until lock is broken by distance or line of sight.

When enemy ships take actions, they create signals that your ship can intercept. Signals are generated when an enemy ship: 1. Fires, 2. Hits you, 3. Gets very close to you, 4. Is hit by your PHASER A or PHASER B, 5. When you lock on to it.