UnDUNE II is a demake of the classic (and original) RTS game DUNE II, re-created from scratch in PICO-8.

A strategy-based resource management simulation, where three houses fight for control of the planet Dune - the land of sand and home of the spice.

This project started as a fun idea, that I expected to get done within a month or two.
Well... almost 3 years later (working on & off, in my free time) - I'm happy to say that it is finally finished! 😅

If you've never played the original (or an old-school RTS) before, the basic principle of UnDUNE II is as follows.
Build up your base by ...building! (just remember to put down concrete slab foundations before placing your buildings, to avoid damage). 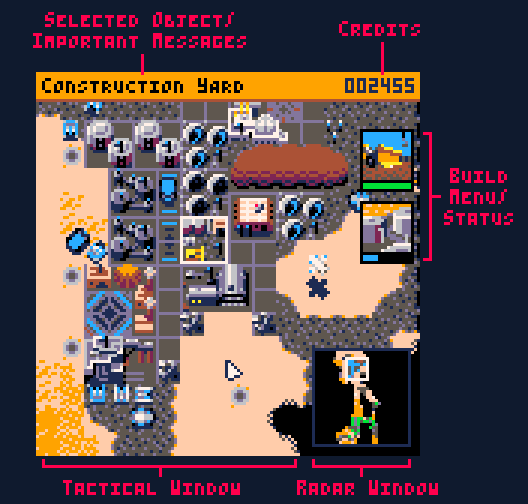 Wind Traps generate electricity to power your buildings. Refinery's take raw Spice (mined by Harvesters), which are converted into credits, to allow you to build more! Take your units and explore your new terrain.

But watch out, as you are not alone. There are two other foreign factions that will fight you for control of Dune. Not to mention the native lifeforms - such as Sandworms, which can swallow units whole!

Units can be instructed to attack enemy units and may automatically retreat when outnumbered. Harvesters will automatically try to find the closest spice, but can also be told where to mine - they'll also automatically return to base for unloading when full.

Grow your base, expand your building options as you go (more will unlock at later levels). Preserve your Construction Yard at all costs - you can't build another one!
(unless you have an MCV...)

A sticky ‘featured game’ if I ever saw one!

@freds72 Bless you, Sir 🙏
(+thx again for your contributions!)

(Thanks for the credit, I don't ever remember writing this exmaple xD)

I keep thinking I've seen the limits of the PICO-8, and then someone makes something astonishing like this. Even spread across multiple cartridges, that's some incredible work.

As a game, I found my main problem in most missions was just the unit cap, and I probably overused building turrets right up to the enemy base because turrets didn't seem to be limited. The penultimate mission did keep me on my toes with the many types of attackers from different directions.

But something has gone awry with my two attempts on the final mission. Both times I got into a state where:

I wouldn't be surprised if I've built way more stuff than is needed to defeat this mission, but I don't think it's more than I built in previous missions. I have 8 Refineries and 16 Rocket Turrets, for example.

I hope something in here is useful in diagonsing it, and congratulations on the amount you have managed to make happen here.

Hi @Cowirrie,
Thanks for the kind words 😊

Ah... yeah - TBH, it's probably all the Turrets that did it.
They did originally count towards the unit cap, but then it seemed to limiting.
But alas, as they don't count toward the building cap either, I did leave the door open for "exploitation" 😉

While the unit cap was a feature of the original, it's also present here for (probably) exactly the same reason... resource usage. Each unit (+turret) takes up certain CPU/mem resources. Trouble is - if that gets too high, then things get "interesting", as they all start treading on eachother's cpu/mem usage.

So, I'm afraid you'll prob have to find a different tactic to building up to enemy bases (hint: concrete slabs will do it too, and take no extra cpu/mem overhead 😉). Then you can plonk a couple of turrets by their base and... grab some popcorn & watch what happens! 😈

If all else fails, you might want to try downloading the binary build from the UnDUNE II itch.io page. As that might run a bit faster than web version.

Amazing work on many levels!

@Liquidream : Thank you, it was useful to know Turrets might be the problem.

In previous missions I made enthusiastic use of building Concrete up to the enemy's doorstep and placing most of my Turrets right outside their base. On this mission this seemed hard to do, so on my first attempts I built a lot more defensive Turrets while I moved my units into place.

This time. I built less excessively, attacked sooner and got a Construction Yard placed in the upper right as soon as I could. All of this was in the Web player.

Thank you again for an amazing game.

Congrats on completing it, @Cowirrie! 🥳

...and thanks all for the kind words!
Glad ppl are enjoying playing UnDUNE II 😊

Congrats on the feature @Liquidream!

@Demnarwhale: No, this is by design I'm afraid
(fairly certain that was the same in the original also?)

Might be better once you have more units (Quads, Tanks, etc.) as opposed to infantry/troopers - as their retreat can be beneficial (especially if you have a Repair Facility 😉)

Glad to hear you are enjoying it otherwise!

GOSH. There have been some incredible demakes on Pico (POOM and Alone in Pico come quickly to mind), but IMHO, this cart has gone a step even further: it's not only a technically-impressive 8-bit recreation, but genuinely addictive and playable. That's a credit to the original's pioneering gameplay, for sure, but it takes some serious black magic to recreate Dune 2's UI (and aesthetic!) with such fewer resources. I quickly found myself as engaged as I had once been with the original. The pixels must flow...

@mothgram Thank you for that wonderful (+generous!) review - hearing such kind words makes it all worth it 🙏
You just made my day! 😊

I got further I didn't realized about repair facilities your right amazing game
something I was able to do was destroy the enemy base with defense turrets it was super fun.

Please, add the "sound test" function!
I'm not that fan to replay entire great game even in it demade glory... Yet I'd love to hear all of the musics chiptuned!

@ClockworkBastard Alas, there's 0 Tokens left for such a feature
...as cool as that would be - the sound test from Sonic 2 is one of my fav features of all time ("Aquatic Ruin" if the cart was a tape, I'd have worn a hole in it playing that!)

Now, it's not my place to say whether this is possible, but...
...it might be cool if the music maestro @Gruber (who arranged ALL the music in UnDUNE II), someday made the music available for you to listen to somehow? Maybe using the BBS music player feature, or something..? 🤔
(Sorry Chris, I'm not trying to throw you under the bus here 😇)

@Liquidream @ClockworkBastard - Ideas are flowing! Let me check out that soundtrack again 🤔

@Gruber , oh hi!
I'm rather new to the Scene but
I already know you as a Pico-8 musician!
Here is your coves too! We'll wait some release of your.

Utterly crazy and amazing that this is done in Pico-8. Kudos!

This is absolutely my favorite pico8 game. Lost several hours to it. Wonderful work.

Thank you very much, all! 😊

This looks amazing as ever, glad there was another update

Just a little question,
When this was released on itch.io I was pretty sure this was a multi cart.

Granted, the size of the .p8.png is 48ko here, which seems twice as big as some other carts...

But It was under the impression that it's impossible to release multicart as .p8.png, only as .p8 with accompying files or executables ?

So I am in the wrong here and how ?
Is this either not a multicart or is is possible to release multicart as .p8.png ?

Yup, it's a multi-cart web export on Itch.io.
However, as you say, the BBS does not support these.

So, in order to get the equivalent - I made a slightly modified build of the game which loads the separate carts (I uploaded all 12 of them, separately to my BBS profile). Then use the LOAD() function to switch between them, which the BBS does support.

For example, instead of doing LOAD("GAME_LVL2") like you would with normal multi-cart, my BBS-version of the game does a LOAD("#GAME_LVL2"), which makes the PICO-8 BBS web player auto-download and load another cart. I was already using DSET/DGET to keep track of game state - so it "just works"

(This also means that UnDUNE II can work from SPLORE, which means it can run on any device that can run PICO-8 🤓)

Hopefully, this makes sense - but shout if you want anything clarified.

So if I understand this right...
This: https://www.lexaloffle.com/bbs/cposts/un/undune2-3.p8.png contains a single cart

However when executing it through the web player, other carts of the multicart will be loaded by using the load instruction

Now if I download the aforementioned cart, and execute it with the official ARM pico8 client say on my handheld, I assume this will off course not work if the handheld is not connected to the internet

Will it work if the handheld is connected to the internet though ?

It happens just after the family choice and data loading.

Why scrambling the code btw? or placing no comment? Does a comment (or label) takes precious place in the cart?

@Voljegaaa Correct and yes it should do. As long as your client (web/other) has internet connection, then PICO-8 will be able to LOAD() any necessary carts on demand.

@m_b Please try updating to the latest build of PICO-8 (v0.2.5c) as there was a bug in that build that could be related.

The uploaded code is minified to bring the code size below not just the token limit, but also the compressed code size. Sadly, that means no space for comments.

Great, but last level always got "Out of memory" error :-/

@Mirek Unfortunately, it's still possible to break (particularly on last leve). This can depend particularly on your tactics. For example, tactics like creating lots of concrete slabs and turrets up to enemy bases can eventually be too much for it to handle.
Thanks for playing - hope you still managed to have fun 😀

@Liquidream - right, if you have a lot of buildings there is a bug. If not, then you can win game :-)