Pico Arcade is a game launcher that launches 36 arcade-style games from great cartmakers!

Use left and right arrows to go through the carts.

Press X to launch the cart!

You can get back to the Arcade from the Pause Menu. 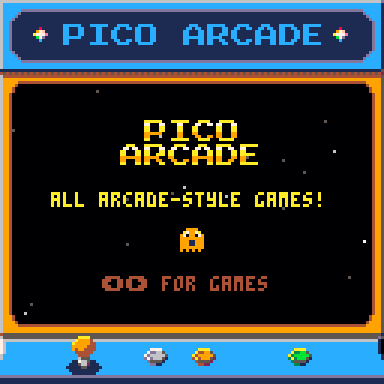 P.S. If you have other favorite high-quality, arcade-style Pico-8 games, let me know! I can publish another showcase in the future.

Great idea, @thattomhall
I love how you made special icons for each game - really ties it all in nicely.
I can see this being a popular idea! 😁

Thanks for the first two -- Omega Zone is in there!

really great idea!
thanks for including shpm2k :)

Mistigri is probably my favorite arcade cart on the site.
I'd be flattered if Heat Death made the cut, although I do concede it feels more like a console port of an arcade game.
Maybe Combo Pool!

Thanks, @ultrabrite and @gate88 , I’ll check these out!

Launcher updated with those, plus Frogger, for 30 ARCADE GAMES! WOOOO!

Oh no it's dizzy

If only Virtua racing by freds72 was in cartridge format...

Minsoft has a game in the launcher

That would be cool, but since the carts weren’t made for this launcher, impossible. I made all the parts so your inputs while selecting would work but the “test anim” felt more active so I just used it. :)

Thanks for suggesting one of mine Dogerizer, and thanks thattomhall for including Cosmo Boing Deluxe.

I did a remake(ish) of the arcade game Tunnel Hunt as well:

Also, not by me but this is a nice Missile Command style game:

Nice! If I make another, will add!

No thank you for making amazing games, Minsoft. What's next?

Actually @thattomhall would it be possible to make another one after where you actually travel around an arcade, but would instead feature Pico-8 classics that would not necessarily be arcade style

Loose gravel would be cool in the collection

Thanks for the compliment! I did start a new game a while back...another one based on an arcade classic. I haven't worked on it for a while so need to get back to it!

Updated with SIX MORE ARCADE GAMES! Thanks for the suggestions folks!

Thanks much! Hopefully it helps people find these games easier!

This is awesome :)
Feel free to use my Asteroids clone if you think it fits.

That's cool! How did you load the carts in the cart?
here is my attempt here.

Oh, and if you want you can put CandyColt Classic on it!

@CandyColt_Games Thanks! I used the LOAD command, with “Back to Arcade” parameter after cart name.

Aw thanks! Gotta update with some new carts!

hey, have you thought ove putting this on www.itch.io?
it would be very popular there too!

Thanks for the comment. I don’t think carts can LOAD feom another site — only works on the BBS. Otherwise I would for sure!