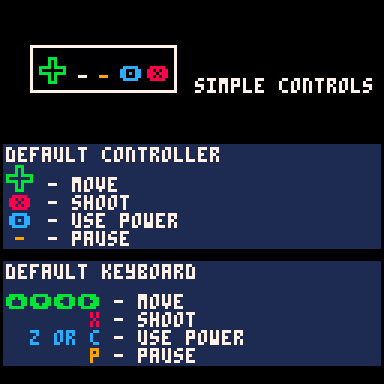 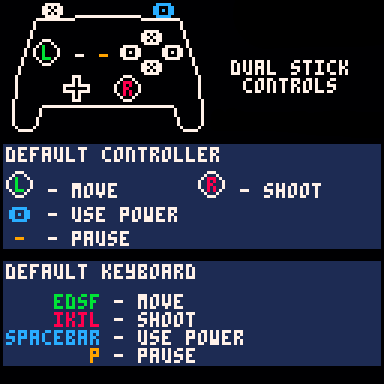 I wish I was better at action games, @gate88. This is un-be-freakingly-incredibly polished and is absolutely beautiful. Just have to give it all I can, Gold Star all the way.

@dw817 - Try out the "easier" difficulty if you're having trouble. It's still not particularly easy, but it'll help you get your feet wet.

I intended the game to have a high skill ceiling, and theoretically you should be able to improve if you keep at it :)

EDIT: The "simple" controls being the ones with the arrows and the two buttons.

This is great. The level of polish is really impressive. The animation setting the scene at the beginning is very slick. And it’s a very good shooter.

Added a tutorial! Hopefully it's easier to learn now!

gate88 can you tell me how you managed to get the twin stick working?

I have a bug of whenever I shoot until my last life, I always shoot left no matter which way I move as in if I move left then start shooting, I shoot left instead of right, Same with vertically. If I shoot up or down I will still shoot left

my OCD kicked in to see wether or not my 'spaceship' was touching the pixels of bullets getting bombarded at me. needless to say it was an awesome game and i wish you luck on the next project

you should add a survival mode where you cant attack and every 30s an enemy appears, 1m a bird appears, and 2m a laser shooter appears, but it doesn't summon monsters