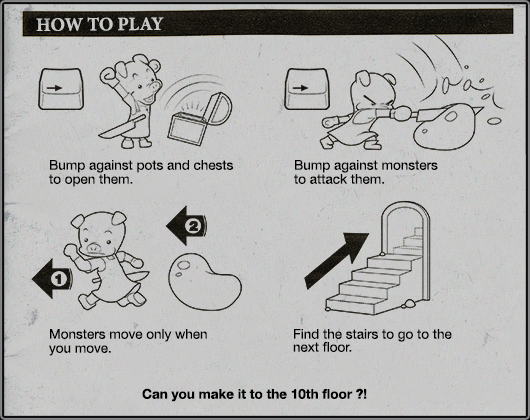 Porklike is a minimalistic, classic Roguelike made in the Pico-8 enigne. Enter the tower of Wurstlord. Can you make it to the top and steal his legendary Kielbasa? 9 floors of dangerous traps and enemies await you. Only if you move carefully and master your character's abilities will you become the champion of Porklike.

Porklike was created as part of a video tutorial series. If you want to make your own Roguelike, please check it out:

Ha! I just started watching your series! It's really neat to see this! I've sort of been jumping around the episodes trying to see some stuff. Haven't actually started on the game bc I'm not at my computer watching your vids <shrug>. Can't wait!

A classical roguelike, on Pico-8, no less? That's like two of my retro gaming guilty pleasures!

Your game development series is an inspiration to us all :D

EDIT: I just realised that the gameplay here is very Necrodancer-esque. I might make a CotN demake for my next Pico-8 game!

I've been watching your tutorials for a while now and gg dude!

Really like it! The manual telling you how to play looks super cool, and I like how you can't take to long in each level.

I really want to learn how to make stuff like this, but I use a chrmebook and it has parental controls on it, so I can't watch normal Youtube, so it'll be a while till I can learn, not that I had Pico-8 on my computer anyway.

This game is just awesome

Hello Krystman, I am slightly new to Pico-8 and I was wondering if I could do a re skin of Porkalike. I would still give you full credit when I post it.

This is most excellent. Gameplay is very well balanced, yet challenging enough to warrant repeat plays.

The game is awesome
I love the tutorials

Worth the wait. One of the best I've played recently. why have you done this to me :(

@SmellyFishstiks It's revenge for that one thing that you did. ;)

I watched your introspective of Porklike on Youtube the other day. It resonated strongly with me as I went through a lot of the same stuff on Zedwolf, I just wanted to say thanks for talking about it :)

Thanks for this game and the great tutorial series!

Guess what game I played first, when I managed to update my PocketCHIP to Pico-8 v0.20i!? :) Another short question: Why did you ditch the idea of the endlessly running bass loop on floor 0? In the release version the complete music seems to be playing from the start.

@CeriX Ha! Looking good. I did not ditch it. It's a genuine bug that nobody noticed until now. Thank you! Will release an update soon.

I like this game very much!
The sprites have a lot of detail with FIVE colors, light and dark gray, yellow, white, and black.
That is impressive.
I like that the higher you get, the harder it is.
Keep up the good work!

Some extra comments and me being stupid:

No u @Krystman (Not really)

Screen Shot 1: First floor (And I realized, I could just kill teh plant and get to the second floor with around 2 HP.)

Some comments in my head during the game:
Edit: That's so evil! :(

Other Edits: Mostly bad luck on the first and second floors.

(Floor 3, unfair death) Edit 3: I just went on that tile and died. The plant wasn't visible

Edits below: More bad luck
(Me even more stupid than edit 6) Edit 5: Whyyyyyyyyyyyyyyyy.
(Me stupid again) Edit 6: I just started! And an instant death!

Also, you can kill Wurstlord? (I used a Porklike Wurstlord mod to find this out.)

@evman2k Yes, you can kill him.

Not sure what you are describing there but first screenshot seems perfectly fair considering it must be the 2nd floor.

I killed Wurstlord by using a plant to snipe him when I ran in circles.

Also Doh! I must remember to not not comment on a game while playing.

Is there any way to heal?

also, nice pig-and-crossbones art for when you die.

(I'm not being sarcastic, for some reason, it interests me)