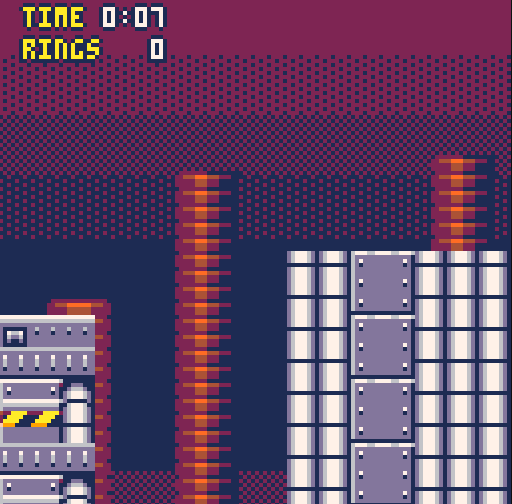 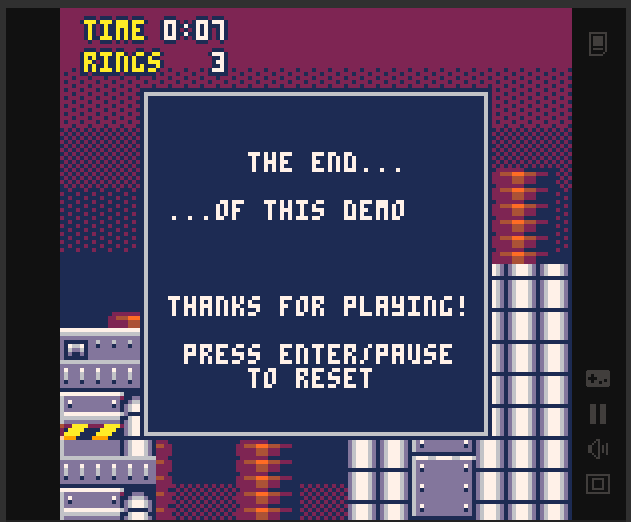 HEllo bonevolt,
please, do the full level emerald hill and chemical plant and aquatic ruin and casino night and death egg with acts 1 and 2
add the bosses
add chaos emerald if the special stage complete.
the giant ring send you the blue sphere

I don't know if this would make enough of a difference to justify the effort, but it looks like the running animation goes at a constant framerate regardless of Sonic's speed. If it's easy enough to fit without too many added token, I would recommend basing the animation speed for running on how fast Sonic is moving. It's a little touch that makes Sonic feel a bit more like he's actually interacting with the ground despite the cartoonish animation.

Also, while it wouldn't be able to be tweeted, you could make the fuller game longer by having it use multiple carts, if you finish your current plans and still feel like making more that is.

@kimiyoribaka It already behaves this way. Do a spin dash at max speed and immediately press up to uncurl. You'll see that the running animation goes a lot faster than running at a slow speed. I implemented it exactly like in the genesis titles.

Yeah, I'll probably make it into a multicart at some point.

This game is very well made that it looks like the actual sonic!
very well done!

hey uh...u still working on this?

@SB1020X Not at the moment, but it will be updated at some point before the heat death of the universe... Hopefully haha

imma say this again. hey uh...u still working on this?

please, bonevolt just answered that. don’t press people who make games as a hobby and share them freely!

Wow this is a great rendition of Sonic. Hope for more levels / mods. :)

this is awsome demo!

it needs to be LONGAR!