Explore a mysterious and exciting dungeon filled with exciting mysteries without ever leaving the same room!

Why would you change rooms when clearly this one has all the danger and excitement and danger that one could possibly need?!

Come to the One Room Dungeon and live the rest of your newly mysterious-and-exciting life there!!!

One Room Dungeon is my entry to Ludum Dare #37, of which the theme was 'One Room'!

It's definitely my most ambitious LD entry so far and I'm very happy with it too! Sadly I had to rush the audio a bit towards the end because time was going faster somehow.

The game is also on Itch.io and of course there's the Ludum Dare submission!

Feedback is most welcome, especially on the Ludum Dare page!

Edit: If you are interested, I wrote a post-mortem about this game and the making of this game!

Thank you to everyone who played the game and thank you again if you leaved some feedback! :)

One Room Dungeon
by TRASEVOL_DOG

This is so good. I love the character's panicked arm-flailing run.

This is the best variation of Tetris I've played yet! Good stuff.

very good game! and addictive!
though I'm bothered by the lower row of tiles. I think walls "à la zelda" would be perfect.

I really enjoyed this, although I agree that the bottom row is a little difficult to deal with. the last tile can sneak under there. It wasn't clear what the X+arrow key did initially either.

This is great! What I'm most impressed by is how solid the presentation is despite the 48h time limit, like the really clever and subtle tutorial that teaches you all you need to know in less than 10 seconds.

Got to 2-something, going to go back to it later to see if I can reach some sort of final level or something.
Edit: I think I "beat" the game, made it to loop 9 (and managed to accidentally hit X before I could take a screencap). Really fun.

The game is great, but I have lots of slowdown after chain-chomp-like enemies begin to appear.

One Room Dungeon has been updated!!!

Thank you to everyone who leaved comments here and on the Ludum Dare page! Those who left actual feedback in particular because they helped making this update better!

Thanks again everyone! Do tell me what you think of the update! Feedback is welcome and so are your scores!

Great game TD! I managed a 26. I'm sure I can get a better score. I didn't get any slow down from the chain chomp enemies, although maybe that was pre-update.

Played the post-jam update a bit and while there are many good and useful changes, I do think you're going about the "post-game" progression system a bit wrong. By giving the player more HP on each successive loop you are making the game easier the longer you play, which bit-by-bit takes away any challenge that is left until the game becomes a question of "how long can I play before I get bored and quit?". 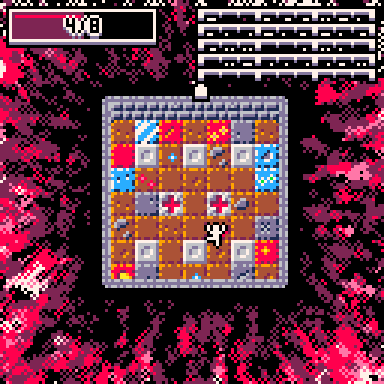 The way I play the game is that I know that I can afford two free hits as long as there is a health tile nearby, so rushing headfirst into large groups of enemies to step on a cluster of well-guarded tiles is usually a strategy that works. The more health I have, the more careless I can be, so you can see why the game becomes trivial to me with enough health.

Instead, I'd suggest making the game harder on successive loops instead to really force players to act skillfully. You could be doing things like taking away 1 point of health on every loop, or only making the health-restoring tiles spawn on every second (and every third, and every fourth and so on) floor, which would require players to stop being careless and start actually avoiding the enemies.

Other comments I have is that I really like the new enemy spawning mechanics that give you a fraction of a second to think instead of taking instant damage on floor shifts, and I also think the improved music suit the game well. There's still a bit of lag when multiple enemies are present on the same floor (especially chain chomps and the bomber imps) but it's easy to deal with.

To be honest I really didn't think anyone would get that far into the game... But since someone did, I just patched it and made the late game harder!

I just got to the last level, and as soon as I saw it I hollered for joy. It killed me, but it was awesome. Gonna beat it this time.

I really like it. I feel it is nicely designed :)

I got to 29.. this game is both silly and stressful :o

So from what i can tell, there is no way to kill the monsters. Am i correct?
Also, great game!

A non-stop panic run until I finally scored 35 and gave up :) Great little game, though I do think it might be nice to give the player a breather every few levels as a small reward for successful runs.