Jump, Roll, Hop and Dive your way through sharp caves to rescue your friends.

Huge thanks to everybody who helped us make this - for contributions big or small. Also, a massive thank you to the Pico 8 community for showing us how it's done!

Controller recommended - here's a link to the game on itch.io which supports xbox controller in browser.
https://davbo.itch.io/rolly

One minor thing: The screen transitions out in the hub are kind of jarring. Exiting the screen to the left or right and then ending up in the middle of the next screen with a jump-cut is pretty disorienting, and cutting back when you reach the middle of that screen is even more disorienting.

And I'm not sure how long the game is, but there's no save system, which would've been nice.

A solid platformer with lovely art and music
(also has shades of Celeste - which is never a bad thing!)

I dunno whether you did all the platform code from scratch or used one of the starter libraries, but the collision for the "wall grab" can sometimes seem a little too sensitive (v.frustrating when you just wanna jump over a little hurdle!)

Otherwise, I love it (especially the GameBoy-esque cover) - and can see this becoming another Pico-8 favourite before long.

Can't pass the first spikes. Can't get a grasp of the controls. When I push Right + X, I'd like the guy to roll right regardless of which side he's facing.

@firefly a big thing is to not always be rolling, just use rolling to help give you a little boost around or up. a little "hop" as the game calls it.

Ok, passed the first spikes. The trick is to roll forward MID-AIR to get a boost. There's potential in the mechanics and the levels I've seen so far make good use of them. I'm still struggling with the controls and wondering if they could be more... intuitive, perhaps.

Thanks for playing the game and giving feedback everyone! It's interesting how some problems basically become invisible once we work on the game long enough. Will change our approach a little bit for the next project based on this feedback for sure!

@Liquidream yeah the platforming code is from scratch. The biggest bit of code I grabbed was @freds72's rspr function which was a brilliant help in making the roll so much more expressive without needing to use more than 1 sprite. I could probably strip this back to a starter platformer script with lots of variables for people to make it their own if there's interest - though it would probably be quite token heavy!

This is great! Reminds me a lot of Super Meat Boy (and even Celeste!) :D

😀😀😀 thanks for playing everyone! It's very satisfying to see people enjoying the game 😁

This was very well made, and packed a surprising amount of variety and depth into its mechanics despite having only just spikes, breakable walls, bouncy walls, and the orbs. Each of the areas managed to feel fairly distinct mechanically even with this tiny range of elements (thanks in a large part to how the orbs both force you to roll and recharge your dash/hop). The level design forces you to fully learn how the mechanics work but does so very effectively, never abruptly plunging you too far in over your head.

Visually it was quite polished, especially with Rolly's animations. The little squish when you land feels great, and despite using the same sprites the hop and dodge still managed to feel pretty distinct between their arcs, animation speed, and sound effects. The opening with everything dark because you're trapped in a chest was neat too.

I don't really have any complaints. It's certainly challenging, and relies on a lot of pretty precise timing, but it's definitely doable. I think the almost soothing sound of the death animation and visual effect is actually a significant part of why this game's difficulty doesn't feel obnoxious, as it doesn't take an irritating amount of time and makes death feel a little less punishing. (The nice music helps in this respect too.)

My main suggestion would be to change the color of Rolly's little head tuft when you've used up your hop/dash (kinda like what Celeste did.) Before I fully figured out how the orbs worked I was really confused when I couldn't hop/dash after touching two without using the ability in between them.
The hub area could also use a smoother camera, as tobiasvl noted.

Here's how I fared: 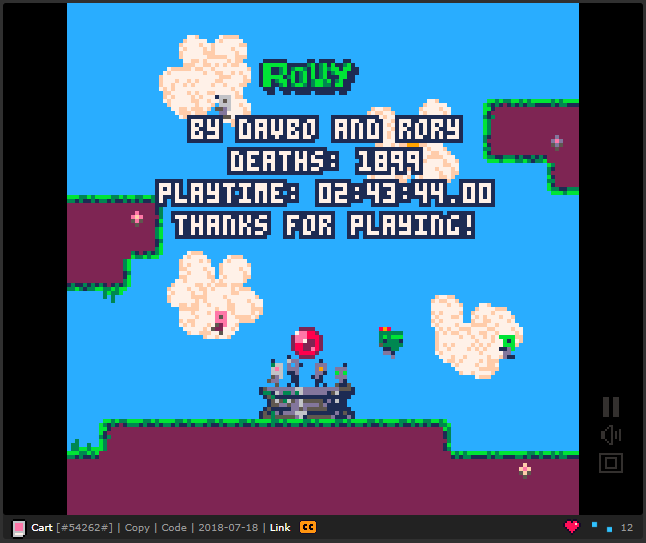 If nothing else I guess I'm persistent :P

Edit: I do not feel that the game is short, I just feel fast.

Wow, the mechanics are just too hard for me. Swapping between walking, rolling, jumping, hopping, and bouncing. I can see a lot of work went into this though.

Great job!
Just when I thought I already finished another game which has Celeste (the remake one) difficulty xD.

Love the intro and the tutorial level before going to the main level.
Also love the obstacles and difficulty :).

Managed with 228 deaths with 28 minutes.

An absolutely stunning example of the potential in PICO-8! One of the best carts of 2019, I think this is in my top 5, no it definitely is! Up there with Just One Boss!

This is probably my favorite platformer in PICO-8. The controls are so smooth and precise!

This is an instant pico-8 classic.

great game i love the mechanics, the graphics, the level design, and the game in general! one of my favorite pico-8 games by far!

Remember playing this in middle school, about 7th or 8th grade. Now I'm a Junior in high school and I finally beat it

Hello! Thanks everyone for playing, so cool to see people still finding and enjoying the game!

@BoogieMaster74 that's no problem with the music. Rory made all the music for the game, so as long as you credit him that's fine. He's on twitter @rcsweenz here: https://twitter.com/rcsweenz

Best of luck with the game! Looking forward to seeing it!

thx for making this game its so fun @Davbo 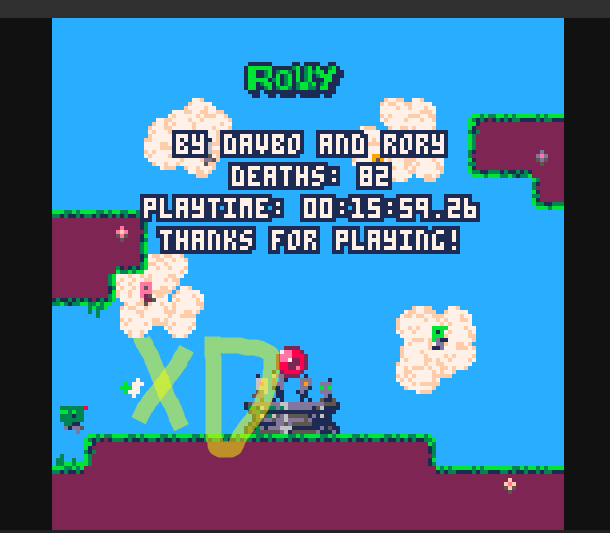 Enjoyed my time with this! Found it in Splore's Featured section. Quite well made, though the wall slide stickiness felt a bit off sometimes, and I struggled with the controls on screens that asked for a mix of a lot of different move types (jumps/wall jumps/walljumprolls/rolls/uprolls). The level design was forgiving enough in some of the end-of-screen spots where I could kind of fumble with back-and-forth wall jumps to stall, which I appreciated. 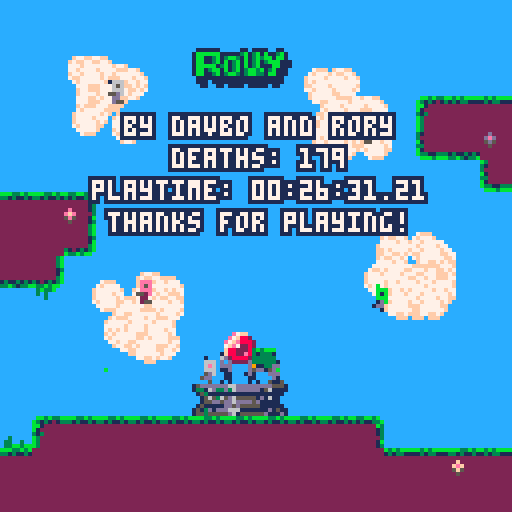 Great game! Can't believe how long it took me to figure out that you can roll upward by pressing UP + Roll...

Anyways, I had fun playing this one.

who made the epic cart cover?

This is so cool!
I like the character! you can roll around, roll in midair to get a boost, and more stuff like that!
It's a beautiful game and everything.
Im gonna play this non-stop

Edit: music is amazing and the rolling thing takes some time to get used to.
I hope there is a sequel soon.

I think this is one of the best platformers I've played on PICO-8! the character is really fun to control, the level design is really good, it's difficult but never to the point that you think you can't do it, and the music is great! my only complaint is that there isn't more to play!