Greetings Pico-8!
I am Simon, but more well known as Scrub, or ScrubSandwich.
As of now I make little programs and music demos sometimes. I want to to make a lot more so
don't touch that dial and stay tuned!
~Simon

Made a rendition of the Cave Story title song / plantation theme with some extra visuals. I've been playing a whole lot of Cave Story recently and I thought I'd pay it tribute by making this.
Take Care :)

Copy and paste the snippet below into your HTML.
Note: This cartridge's settings do not allow embedded playback. A [Play at lexaloffle] link will be included instead.
Greeting humanoids, this is the first game release from the group of SORCERY. We hope that you enjoy our humble release filled with Christmas cheer and winter shenanigans.
P#71277 2019-12-21 02:58 ( Edited 2019-12-22 02:29)

Mark as Abuse
invite
by ScrubSandwich

Copy and paste the snippet below into your HTML.
Note: This cartridge's settings do not allow embedded playback. A [Play at lexaloffle] link will be included instead.
Greetings Humanoids, so I have been interested in the demo scene for quite some time now and I thought I'd start a group and invite those interested. This is that invite. I work mostly on music but I can do other things to an extent. To those who join, I look forward on working with you. I mostly need a programmer and a artist as, while trying not to sound cocky, I think I have the music down pat. -Simon
P#70862 2019-12-10 23:48

Made a little Christmas greeting for the holidays. Hoo Hoo Hoooo!

Copy and paste the snippet below into your HTML.
Note: This cartridge's settings do not allow embedded playback. A [Play at lexaloffle] link will be included instead.
This is a short recreation of Ultima VI's boot music, I thought it was cool enough to post
ultima ultima6 ultimavi music
P#69570 2019-11-01 19:56

Copy and paste the snippet below into your HTML.
Note: This cartridge's settings do not allow embedded playback. A [Play at lexaloffle] link will be included instead.
Hello, so as you can tell this isn't finished, planned to be though. This is a simple engine for ultima, as of now it's very basic. you can add to it as much as you like.
ultima engine ultimaengine wo woo hello simple ver version
P#69176 2019-10-22 20:57 ( Edited 2019-10-23 21:51)

Mark as Abuse
ghostbuster
by ScrubSandwich

Copy and paste the snippet below into your HTML.
Note: This cartridge's settings do not allow embedded playback. A [Play at lexaloffle] link will be included instead.
Alright so after a month I quit working on this game, I'm submitting it to the jam regardless because otherwise it will sit dormant forever. Many a bug plagued this thing and I'm glad to get rid of it. If you can fix it then well, have a crack at it. In fact I honestly don't care if you change the credits and upload it as your own. I hope what little bit of a game that IS here is enjoyable
ghost
P#67378 2019-09-08 00:03

Internet capability. It's not something you hear much of when talking about Pico-8, even if it's looked down upon for the ridiculousness of a 80's themed console could do such a thing. But there is one common term that does crop op alot, BBS. BBS is the name of Pico-8's Cart Library (Bulletin Board System, for those unaware) and the thing I wish Pico-8 users could freely control. Now Pico-8 already has one of these and indeed it does, but Imagine running your own.
Pico-8 has started many people on there careers as game developers, why not web developers? I'd like to mention some points.

2.New Challenges
The struggles of dealing with the web development are more than a minor nuisance, an while I believe It would be simplified for Pico-8 users, Dealing with the people logged in, Members who are allowed and not, maybe even dealing with a White-list. Valuable skill for anybody

3.Many Possibility's
With a take to the internet many Pico-8 Developers will find new things to do with that. And who knows a BBS game could be rather interesting. Wouldn't you like to play a game across the web with your favorite Pico-8 pals?

4.New Cart Sharing Methods
A Custom BBS could be one's hub to there favorite Carts, or a way for them sharing Carts. Some people use a raspberry
PI for Pico-8, and having the only description for a game be available from the Users browsers, makes it difficult
for those users to learn about there favorite games.

As for limitations. Well there are several Ideas. One making it text based only, Two limiting colors or a few select
colors per page. I think there would be several benefits to adding a User Controlled BBS System.

Those are just my thoughts, opinions, and ideas. Thank You for reading!

Copy and paste the snippet below into your HTML.
Note: This cartridge's settings do not allow embedded playback. A [Play at lexaloffle] link will be included instead.
This is my first cart to the splore so forgive me if its a bit messy. This is the overworld theme to my Ultima like game Inversia. Now to answer some questions.
Q Can I use this song? A No
Q When will it come out? A I don't know
Q How do I make boiled eggs? A Put uncracked eggs and a pot of water and boil for 20 minutes, then crack the eggs and enjoy.

sooo i may be making a version of Bonzi Buddy for the pico-8
the image below shows my progress
the BONZI BUDDY ICON will move him back in postion
the BANANA icon will feed the purple gorilla
the MUSIC icon will make BB sing a song
and the SOUND icon will toggle the music
maybe more idk. 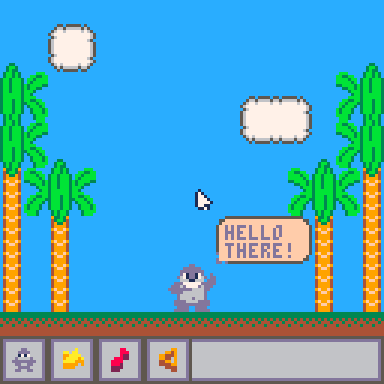