The battle for Eternia is in your hands!

Side with He-Man and his allies or Skeletor and his minions in this new take on the classic Barbarian sword fighting game.

Battle 8 levels against increasingly difficult foes or play against a friend. You have the power!

This Pico-8 cart is bursting with the Power of Grayskull, featuring:

-fixed crash in "vs cpu" select screen after credits cycle (Introduced in v1.5)

code optimization reclaimed over 110 tokes so:

-There are now 9 characters for each side but you still fight 8 rounds, picked among this pool.

-Animated intro! (I really wanted this from the start and was so sad to cut it before)

Due to the major changes in this release, the previous one remains available below

Thanks to @RoundUpGaming suggestions, here's what changed:

P1 vs CPU is a 1 round fight with customizable difficulties, characters and stage

While selecting your character in vs modes, use up and down to select stage and difficulty. 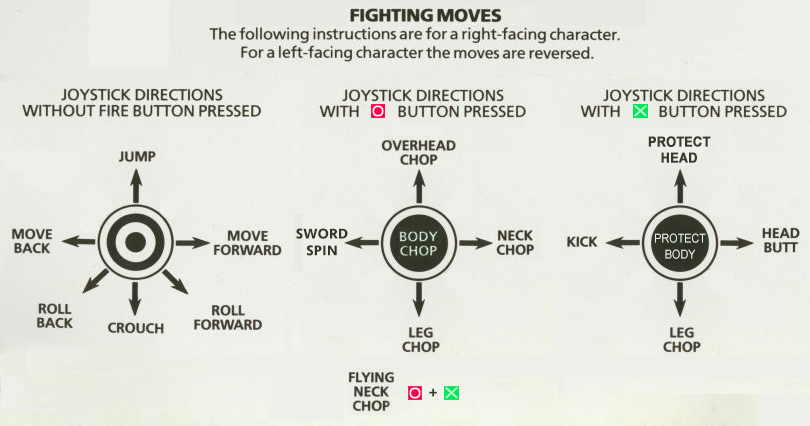 Masters of the Universe and all related characters TM by Mattel Inc.

FL - for his barbarian archive and source codes: http://barbarian.1987.free.fr

@freds72 Frederic Souchu - for finding and sharing it

@JadeLombax - for his triangle drawing functions

Started on may 29 with the first teaser

35% of the time on picodraw for backgrounds

About three months, working around three hours per day 5 days a week when possible.

My goal for this game was to experiment and expand upon the sprite techniques I used for mortal card, as that was a simple and quite rushed game, made for a jam, but I felt the same ideas could be used for a proper action game. After starting, I also decided to experiment a bit with this mixed shapes/map tiles backgrounds to try and give the game a “big” look, big animated sprites, full screen , painterly style background. I already thought about a barbarian remake since I remembered the game graphics had a lot of repetition that was suitable to be broken into components, and just a short time later, I found John’s post about his motu idea and that gave me the final push as it made it a bit more original and interesting. While scouting the pico bbs to see if a barbarian remake was already attempted or even done, I found this… post that lead to a treasure trove of info that greatly helped for moves timing, AI and overall game flow, even if the code had to be mostly rewritten from scratch for size reason. Overall I am satisfied with the result even if I feel I made a couple of mistakes in the way I manage frames that lead to unnecessary complexity. I should have finalized the frame set once and for all before starting with the input cope and I could have had a more compact representation and probably save some more tokens and compression space.

To fit everything into a cart I had to give up some additional “flourishes” I had in mind, such as an animated intro and an ending mimicking the cartoon with a character giving some moral lesson.. and pre and post fights vignettes with some text and characters portrait.

I had to simplify a bit the bg animations to save tokens so they are not as refined as while they were just work in progress and I had to cut personalized winning poses for every character. I also planned to have a dramatic “clashing” sometimes when swords collided with a lightning and black and white silhouette, but , while I have the code to draw it, it’s simply too much tokens to fit. I might code a deluxe multicart version in the future, but all these are just decorations and don’t really add much to the game itself.

This is my second full game and the third pico coding experiment I also wanted to try to do a port of an existing game to a system, writing my own tools etc.. as old school-style as possible, as I really love reading about classic game programming but never really did anything at the time. Glad that pico-8 gave me a similar, albeit more comfortable chance to experience something close to it. , it was overall a very fun experience, and I hope you all enjoy playing it as much as I enjoyed coding it.

From this experience, I hope I can get some improves tricks for the next game, which I’ll start after a needed break

I will document and release PicoDraw soon, so it can be improved with the input from other pico users.

Woohooo I saved Eternia! Awesome game man! Loved it and it brought back such nice memories - of both he-man and barbarian.

I'm not a super big fan of fighting games as a whole too much and the headchop move is a bit OP against the AI, But this game is amazing! the visuals are stunning and the amount of stuff in this cart is insane! good stuff! :p

this is pretty good，it's very interesting

This is awesome! I just recently finished watching the 2018 She-Ra reboot so this came at a perfect time lol. The graphics are great, the music gets a little repetitive but that's expected, the interplay of what moves hit where and when is pretty interesting, and the control scheme is surprisingly decent for a 2-button fighter with this many moves. The flying neck chop is definitely a bit OP, though - it carried me through the last few fights of arcade mode pretty much singlehandedly. Needless to say, I'm thoroughly impressed!

Nice to see this come together, and good job on the transitions and presentation. Some of the background dithering gets a bit chunky, but I guess it's tough pulling off this detailed a style in 16 colors =p. At first, just hacking away seemed to work, so I thought I'd try and play through like that, but after a few fights I hit a wall of rolls and overhead strikes, guess there's some depth to dig into =).

Also, you mentioned this being a 64KB cart? Is such a thing possible?!

This is such a cool game. The flying neck chop has to be one of the coolest moves I've ever seen in a fighting game. Why wait until the end of the match to perform a fatality? I can't believe how all of this can fit in one Pico cartridge, it's an insane amount of detail.

Thank you! I'm glad you are enjoying it. As for the flying neck chop, I know it's pretty easy to abuse it and win but I ran out of tokens to make any meaningful change from the original. The only thing I did is to make it impossible to decap your opponent before at least hitting him once, because in my research I found some hilarious videos where you can chop it off as soon as the fight start...
@JadeLombax 64Kb is the total size of the .png

Amazing graphics and music! This gives me fond memories of both He-Man and the Karate Champ arcade game

I actually owned the original Barbarian for the C64 and remember it's blatant blud-n-gutz gameplay fondly to this day. A very nice and surprisingly accurate homage to a pleasant teen-aged memory of mine. Thanks so much for the fun game and the awesome example code!

As for the flying neck chop, I remember it being much the same in the original, if not more so. If you timed it right you could open with it and win most of the time.
Again, true to form. ^_^

Super cool! I gotta show my dad this.

are the different characters just cosmetic or do they have different amounts of atk/def (or other stuff)?
also absolutely love the game!
arcade mode is a bit easy (flying neck chop lol), was still a lo of fun tho!
im gonna make an arcade cabinet/a console dedicated to this game with a raspberry pi so i can get the ultimate experience when playing with friends!

I've been looking forward to this! So amazing!!

@RoundUpGaming yes, all characters are the same in terms of moves and stats, in arcade mode the order is random but they grow in difficulties from 1 to 8, as you can also set in vs cpu mode. I just nerfed the flying chop in the 1.1 update. I will consider revising it again when there's a new update but I just have 2 tokens left :((

another thing i realized is you can just hold roll and if the first one hits, the next one will always hit, allowing you to infinitely chain them, regaining stage control at any point during the match. just another observation, but oh damn 2 tokens aint much...

i found another thing, you can control the cpu with p2 buttons. doesnt always work well, but making them roll away will work every time. could be used if youre trying to speedrun which im thinking of doing

I've really been enjoying playing this, so I recorded a video review of it:

@RoundUpGaming Thanks for the bug reports, I've now fixed the problem of P2 buttons affecting CPU. It was such a blatant coding oversight, I have no idea how I didn't notice it until you pointed it out

@extar thanks again for the awesome video

This is fantastic. I had to make a video:

Thanks to @RoundUpGaming suggestions, here's what changed:

@TheRoboZ this update is terrific!!! my kids love this game but the gore was a bit much, nice to see the option for both added. hope to see more great games like this from you.

Amazing game. My son and I played through all the characters. Love all the little details (swords clashing sounds, orco on cleanup).

code optimization reclaimed over 110 tokes so:

-There are now 9 characters for each side but you still fight 8 rounds, picked among this pool.

-Animated intro! (I really wanted this from the start and was so sad to cut it before)

Due to the major changes in this release, the previous one remains available

This is f'ing incredible. You are truly a Master of the Pico-verse.

Love your works!! one of my favourite Pico-8 game designer! ♥

Fighting games aren't really my thing, but this is very well done! I hope you keep making more games :)