Tiny Swordfighter is a swordfighting game, and it's pretty tiny, but it's got some fun features:

It's pretty close to finished, but I figured I'd try doing a WIP post to get some feedback for final adjustments. I'm nearly out of tokens, but there's still some room to optimize some more out, so I can do a small amount of extra stuff. I know it still needs some sound effects and a bossfight song, but other than that, let me know if you find any problems - confusing stuff, frustrating stuff, broken stuff, tedious stuff, etc.

Wow! This is very impressive! Yes, sound effects would be nice, and, I suppose when fighting multiple enemies I wasn't sure if there is something more strategic I can do besides mash on the attack button. Maybe a way to block as well?

I was amazed by the sword animation, especially the flashing blades. The lighting is very cool as well. Inspiring stuff!

Basically you wanna jump all around like a crazy person - originally there was a block button for the player (like what the enemies do), but eventually I found that it was more effective/fun to dodge by jumping around all the time

Playing it again just now I did just discover jumping works well! Also, an energy meter would be nice! I never know when I'm about to die :)

Oh yeah I keep remembering and then forgetting about the missing health bar, lol

Yeah! Nice to lay hands on this one!
Couple of comments (IMHO warning as usual :)

Thanks for the tips, freds!

I was thinking about doing just up/down alone for throw/drop, but I leaned away from it because it seemed like it'd be rough for gamepad people who were using an analog stick, and I probably don't have space to add a control-switching option...

Will think on that some more, maybe there's still some other option floating around.

A timer would be good! I included one in "Tiny Platformer," so I should probably do that here, too.

A more-nuanced art style could definitely look better than this, but for now I'll have to leave that type of stuff to the people who are better at pixel animation than me! I just picked something that'd be simple enough for me to want to make a reasonable number of frames before I got bored or lazy ;)

I think the most I can do for the bump mapping is to fiddle with the tile/wall art some more (cleaner tiles, multiple styles?). I definitely agree that I should look into that sword-shine effect again. I think it looked better to me when I initially made it, but the style of the sword-blur changed at some point after that, and now it's pretty wonky and it looks like a checkerboard. I'll probably switch it to just use one color per sword instead of two - will save me some tokens!

I am Invincible LOL!
Squish
Hehehe

Great stuff as always 2D.
Had a lot of fun jumping as swashbuckling around.

However, it all kinda pair-shaped when I got the gun..?
I dunno if it's just me, or the BBS player (which I know has the whole "held key" issue on Mac ATM), but due to the volume of baddies, I wanted to be near another gun - so when I was firing, I think it just kept swapping guns?
Not sure... but otherwise - I love it so far :D

It's damn pretty good already! I didn't have issues playing it except than you can cheese some levels sometimes. Anyway, it's pretty fun already!

Wow! This is great! It gives me some nidhogg vibes, which is a good thing!

Keep it up mate, it's looking awesome :D

It took me a while to figure out how to defeat the “invincible” fighters.

HOW DO I FIGHT THE BOSS???? ALL I GET IS A DEATH EVERYTIME

@Blessmyday it's like the Cyberdemon: shoot at it until it dies

Nice!
I love this game

Some audio feedback for dealing/taking damage would be nice too

If it's still a work in progress, there's sometimes a bug against the boss. 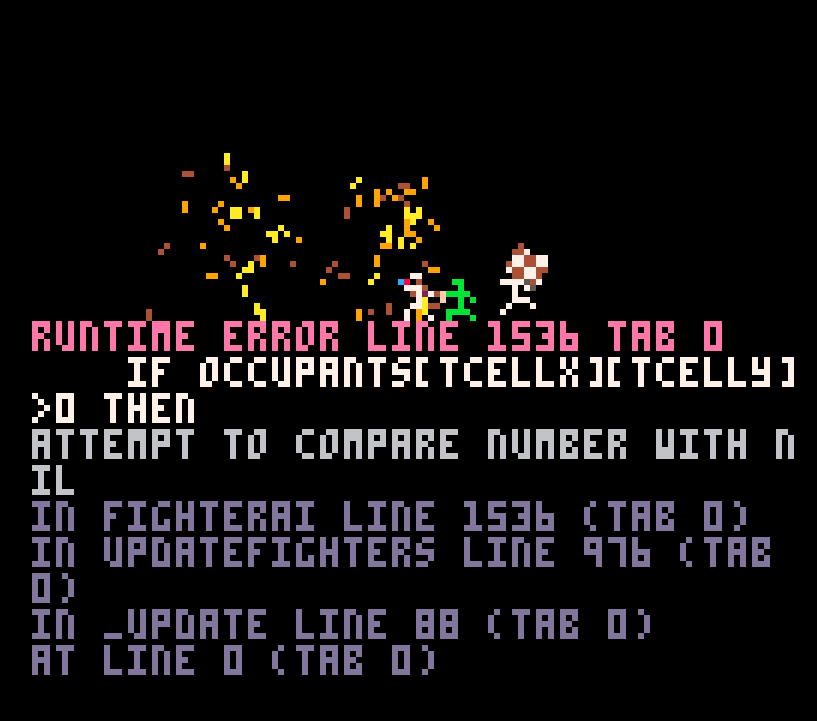 If it's any help tracking it down, I'd just run through the minions to trigger a squash event.

Good game; yours are all really interesting. :)

Woah this is really impressive! I had a lot of fun playing. I liked the lighting. I have seen this type of circle around the player lighting a lot, but yours has flavor and works really well. I like the little sword "shwingggg" / shimmer / motion blur / animation when you turn left or right. Nice boss battle as well! It was hard to pick up a gun among all the swords, but that the challenge was fun.

What a nice MASTERPIECE!