Not so much a game as a tribute to the fishing minigame in Deadly Premonition. I mean, technically you could try to go for a high score, but you probably won't want to.

Fire 1/Z to cast your fishing rod and stop the roulette once you catch something.

As of Pico-8 0.1.0, the intro screen is subject to this bug. If you're running the cartridge in the native version of Pico-8, pressing Esc while the logo is scrolling off the screen will crash the entire program.

I'm working on a tune that features a lot of quick arpeggios, so I had to sequence it with double the intended speed so I could squeeze in all the note data. This uses up sfx slots fairly quickly, which wouldn't be such a problem if sound effects past no. 32 were usable as tracks in the music editor.

In case this isn't feasible, it would be nice if the documentation at least noted this limitation. I ended up using only two channels for one of the tunes in Let's Karate, since I had already used up some of the first 32 sfx slots for game sounds.

I figured that I should probably do this since there's a cover of Megablast for practically every sound chip ever. I think it's a law or something, and I don't want zep to get in trouble with the computer police.

A toy that pokes the sfx RAM full of random garbage and lets you play the results on multiple channels. It'll mostly sound like generic computer ambience from an old educational film.

The randomly generated sounds will be stored in the ROM on startup, so comment out the cstore() at the end of the _init() function if you want to save your sounds for posterity's sake.

Disabling a single channel should technically stop playback on that channel, but it occasionally won't. This might be due to the weird looping points that the program generates for each sfx.

I wanted to see if using the sprite drawing functions would be any faster than using lines and rectfills, so I made a single reference sprite containing all the 2x2 pixel configurations and used that to draw the image. There's really no noticeable change in performance, but now I can change the reference sprite into random garbage and get weird distorted mosaic effects. Press X to check them out!

The sprite memory in PICO-8 can get a bit cramped, so I wanted to try and see if I could implement 1bpp sprites. The idea is basically that each pixel color corresponds to a specific 2x2 pixel configuration. It's not very well optimized, as it more or less draws each pixel out individually. Furthermore, it would probably need another tool to convert hand-drawn single-color sprites into the proper format (I plotted the test image in by hand, because I am legit dumb. It's a screenshot from Tetsuo: The Iron Man.)

CONTROLS:
Arrow keys to pan the camera around.
Fire 1/Z to crop the image into a random size.
I mostly implemented these to see how it would run at different sizes.

Here are the pixel configurations that each color value represents. 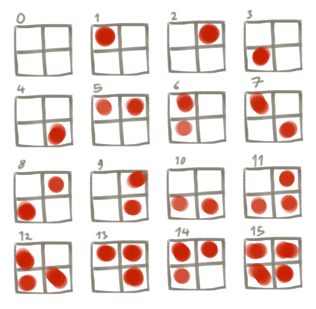