The darker colour palette should be available without fiddling with memory or coming up with detour functions.

@BoneVolt @Krystman
(via YouTube and such... not dissing! You guys are great <3)

Palette switches were cute,
but this whole schebang has flopped into an inefficient knot (as far as I can tell).

...I wish that first-time-carts from total amateurs (like me) could also use "dark-brown", lol.
...And that expert carts don't all use ~double the amount of available colours.

Perhaps I don't understand the memory limitations.
And I do appreciate (and want to preserve) the elegance of "0-15"/Proof of concept/Simplicity didactics etc..

But the cats' been out of the bag for a while.

@zep could you please greenlight "night mode" [EDIT: in the UI or functions].
Maybe its impossible at this rate. Maybe it wasn't intended this way.

Trying to be constructive. Or did I miss something?
It's a super interesting subject, feels almost political.
Happy new year.

I'm making a sexy little 16x16 sprite editor with playback and more that should rely on the D-Pad and Buttons. Doing so mainly for use on the Retroflag-GPi case, or any other handheld.

Give it a go!
Any help/advice/ideas appreciated.


Wanted to share my first proper pico project.
About having only one cigarette left (or not...? what?!)

I used this to make a music video for my band (see youtube embed). DISCLAIMER->GERMAN MUSIC

At the moment it's more of a demo/screensaver, but I would like to turn it into a minigame, or a system of mini games ; if there's fun in it somewhere. So i'm open to ideas :-)

Was thinking of the trope of an "alien brood mother" spitting out mini enemy's. (pack -> cigarettes)
And chaotic controls like only being able to apply gravity/momentum to all objects.

The physics engine is relatively sturdy, except for the lack of Separating_Axis_Theorem, some minor tunnelling and items getting trapped in each other.

I used Chris Heckers impulse physics articles from the 90s and a dynamically subdivided "intra-frame-crawl-while-loop-thingy" to resolve collisions chronologically. and the "Pool hall lessons" article on gamasutra for early false returns (which should be followed by an S.A.T. check which I have yet to write...) So could be waaaay more efficient.

Glad to share some cleaned up functions if anyone needs them (though the code is pretty legible).
important: USES METATABLE CHANGES FOR VECTOR MATH!! (see tab 4 / --metatables--)

Shoutout to the community for the amazing and helpful threads, and specially to lazydev @Krystman for his fantastic (and very funny) youtube series (LG aus Kölle).

Hope you get a giggle out of this one.

So i'm working on a 2D physics based collision engine.

And I was wondering if this was a legit/efficient way to check if Two Edges/Line-Segments Intersect.

1. Treat them as AABBs and check if those overlap, is so keep the "resulting mini rectangle".
-->otherwise abort

2. Treat them as Linear-Functions (infinite strait lines) and check if they are parallel, if NOT determine the resulting "point of intersection"
--otherwise abort

3. check if the "point of intersection" is inside the "resulting mini rectangle".
--return that point, otherwise abort

Lets assume the sub-functions (which I haven't included) are squeaky clean, its more about the idea...
Have to say it works a charm at the moment, even on weird concave polygons. But I could be going mad.

Any tips? Would it be easier on the CPU to use dot/cross product stuff? Am I missing something? 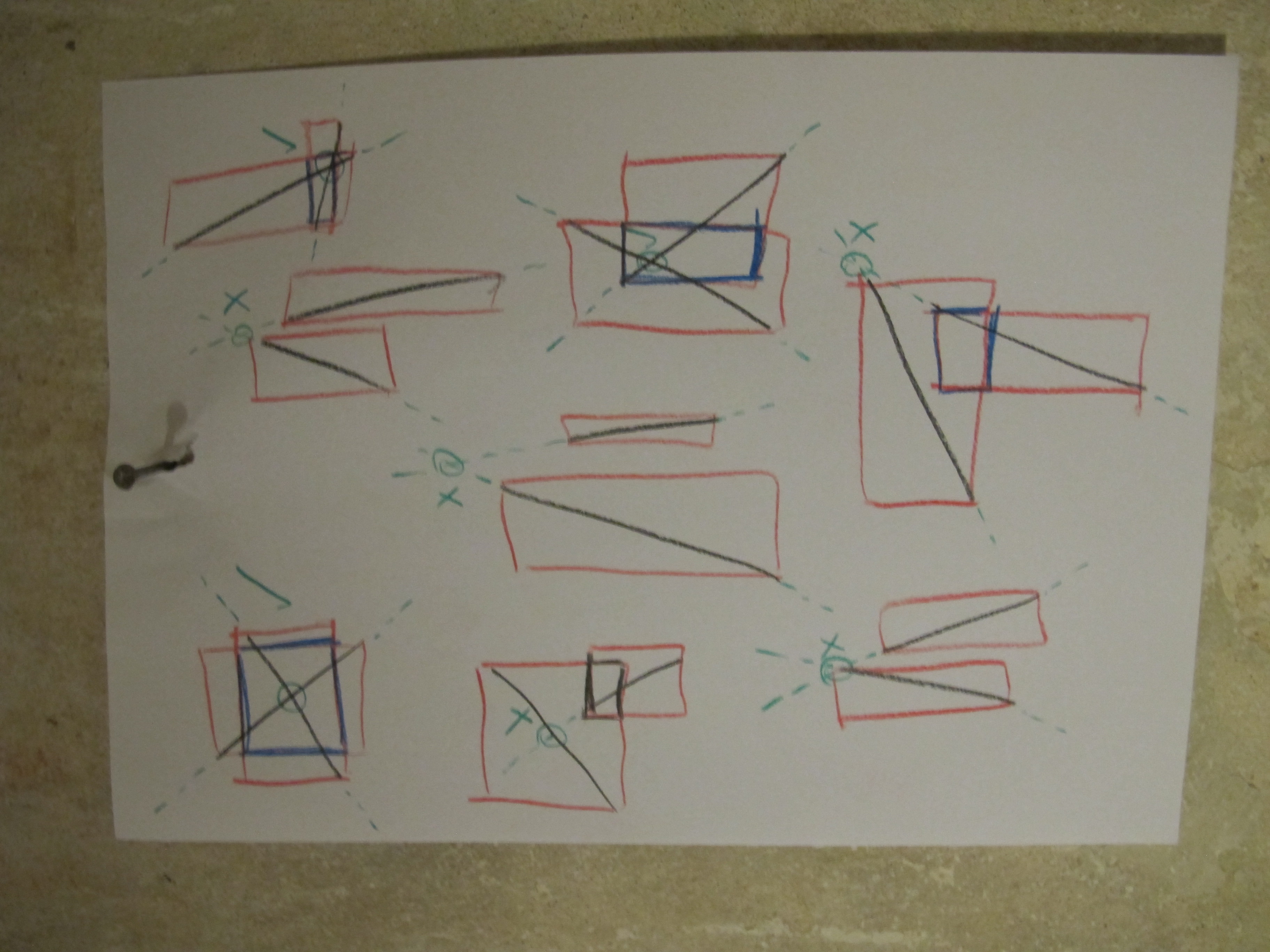