As an retired half-life modder and frequent forum poster, I'm pretty used to the idea of mega-threads. Basically, the modding forums that I often visited had at the very least a "random" thread, which people used almost like a chat.

Some others would also have a WIP thread, which incentivized people to post their WIPs more often, because they didn't need to go through the effort of creating an entirely new thread, just to show off some minor thing they're working on.

So yeah, hate it or love it, I'm just putting the idea forward.

I am so terribly sorry. I actually intended to demake Insaniquarium using this game kit as some form of sample game, but it ended up sitting on my computer for months.

Anyway, over said months, I probably forgot the actual state of this gamekit, but from what I remember:

Obviously I welcome any and all optimizations. Actually... considering the token count I should beg for them, but whatever, date calculations are hard, yo!

You know that feeling when you only have 8x8 pixels to draw something, and it takes an hour to get it right?

Let's make that feeling worse by posting our sprite in this thread, without context, and then despair when none of the other users can figure out what it is.

I'll shamelessly start it off with this thing... 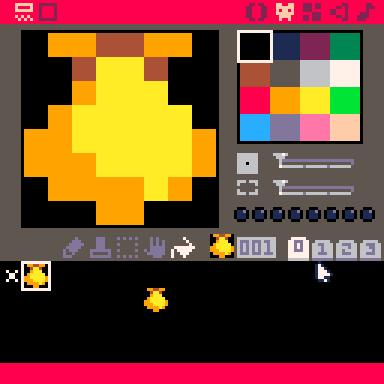 Hey, first of all, excuse my poor photoshopping (Using Krita on Linux, terrible tool. No idea why I'm not using Gimp).

But anyways... What if, while in the code editor, you could hold down a key (maybe ALT?) and it would turn all tokens into coloured blobs. So you could instantly see where and how most of them are used up. 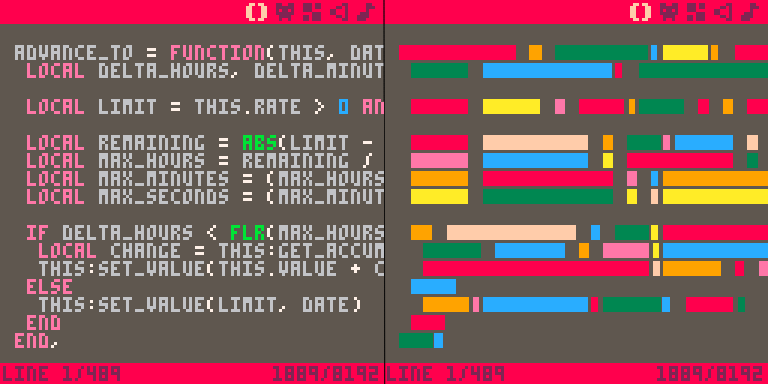 Additionally, maybe instead of being randomly coloured, certain tokens (such as keywords, variable names, separators, etc...) could have a dedicated colour to them.

Now, disclaimer... I don't actually know how the tokens work exactly, I just coloured in the tokens as I felt.

The token blocks themselves, should also look more like this, but in pico8 colour palette:

but I think the image gets the point across even with my terrible photoshopping.

I'm creating a tamagotchi kit, and since os.clock is no longer part of the API, I figured it'd be okay if the user would have to type his/her current time at every launch.

Currently at 1500 tokens, with a datetime input screen, an "are you sure this is correct?" screen, a class for stats/resources (ie. health, hunger, random_event_countdown, etc...), a class for date calculations, and plenty of overflow control for both classes.

Nearly done, but before I submit it, I'd like to inquire if there's a possible improvement to this eye sore of a function?

I wonder, once the highscores feature comes into play, will it be possible to do some extremely limited networking using it? Say for example, instead of using the highscore number as a highscore number, but instead as data. I imagine it wouldn't allow for any real-time networking, but I think it's worth keeping in mind that the highscore number could be used for other things than scores. Maybe showing what decisions other players took, like a Telltale game. Or gravestones of players who have passed away and where.

Mark as Abuse
Fatigue 1.2
by bekey

This is my first pico-8 game, and as such I had to cut about 3/4 of the intended features.
Please excuse the abhorrent collision detection and the rushed pixel-art.

If you do play and finish it, I hope you find that the slow walking speed wasn't too much of a waste of your time.

Protip: Try to avoid facing another object while dropping your current object.

Arrow keys to move.
X/Y/Z to start pulling the item in front of you.
X/Y/Z to stop pulling.