​Shape of Mind is a simple puzzle game similar to Solitaire card games. Connect shapes by dragging them on the board. Shapes of the same color won't connect. You can move strips of connected shapes by grabbing the top-most shape of a strip. Drop shapes onto the Dreamer to begin a Halo. Shapes in the Halo cannot be removed. Once a Halo is complete the shapes will disappear. Complete three Halos to clear all the shapes and win the game!

​This game was created as part of the A Game By Its Cover Jam 2022​. The goal was to create a game based on of the cartridge covers from the Famicase Exhibition 2022​. The cover to Shape of Mind was created by Agustin Crisostomo​.​ 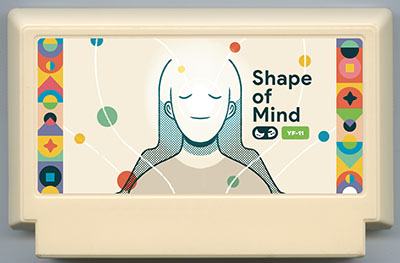 The game was written and designed by Krystian Majewski​, an Independent Developer and the host of the Lazy Devs Academy video channel​. The entire development process was livestreamed.

The music was composed by Gruber Music​.

The game is written entirely in Pico-8.

IT'S SO PRETTY!!! great color scheme choice and music is nice :)

I agree with Ummmm_ok, it is very pretty. Super relaxing and fun.

A fantastic, relaxing (most of the time) game. Everything works extremely well and so much thought has been put into every aspect of the game. The presentation is top notch.

Are all the games winnable ? Maybe add an option to select the random seed ?

@phil Thank you. There might be some unwinable boards. But a vast majority is solveable. If you find a board that you suspect is unsolveable, please post it. Seed manipulation is coming in a future update.

I was going to post that #13486 was unsolvable but I eventually managed it!

Sometimes it just flows and other times you really have to plan ahead. Great game

Is there a maximum amount of shapes for a halo? in the tutorial I've managed to create a whole length of shapes but it was rejected when I tried to send them.
I had to break the string into shorter length to be accepted.

@Bloodbane Yeah a Halo is always exactly 6 shapes. Might allow longer Halos in the future.

Amazingly well done! I usually don't enjoy puzzle games but this is great! :)

Very beautiful game, and uncharacteristically relaxing for a PICO8 game. Polished, clever and one of a kind. It really matches the AGBIC entry's vibe as well.