My entry for Toy Box Jam. Keep climbing to avoid the rising lava. Collect treasure and take down monsters for bonus points.

hey i have this weird glitch where i cant play in fullscreen. do you have the same issue?

Wow, whatta cool HOT game. That lava rises so quick though so I only grab the treasures if they happen to be in my way. Really HOTFOOTING it from platform to platform !

One BURNING Gold Star for you.

@Rimuru, in full-screen click your mouse once. That should activate the controls. And yes, @zep should have the controls active the moment you go to full-screen. I think he's still tinkering with adjustments.

@dw817 how you doing? and i have tried and it did not work and your sayying @zep.Is PICO-8 made by one person?

This is actually tight, feels really good. Love the music and visuals.

Hey !Really cool and gets hard really quick ! I like it.
Well done !

That's a strange coincidence that yesterday i received a comment to swap my buttons, and here you come , uping this tread with this neat little function !

I just discovered this forum yesterday, and it seems that there is really a lot to learn here.

Really fun game, It reminds me of doodle jump for some reason. Has good control, nice momentum, and fair game-play. I'm glad i didn't have to jump from one corner of the screen to the other!

This is such a cool game. It really could be a demake of some old Namco arcade classic from 1984, it's that good. I love the difficulty curve and the addictive gameplay--I still haven't managed to beat that top score on the highscore board. I found out about Toy Box Jam via this as well, it looks it was a lot of fun!
Anyway, here's a gushing video review:

is it even possible to beat that cpu high score? I can't do better than that hahaha 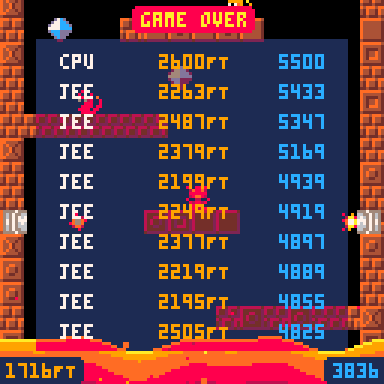 I've yet to reach the top score. Fun game, though the scoring feels uneven - runs that felt the strongest don't usually end up as high as it feels they should go. There's plenty of rng in the scoring, sometimes there's a bunch of trophies early on, sometimes next to none.
This can be seen in how the feet climbed don't correspond with the score - even though with most of these top scores I've
Another small annoyance that comes up when playing repeatedly is the abrupt jump at difficulty. At some point the amount of enemies doubles and the bullets starts shooting much faster. Probably for the first 30 times I'd just die within 5 seconds when that happens. Now I'm getting used to it.

Top score is possible to beat for sure. Top Feet reached by CPU probably too, but would take a huge amount of playing. My top height of nearly 2500 ft was insanely lucky and went far beyond what I've been able to pull of previously, but still only got to the third place. 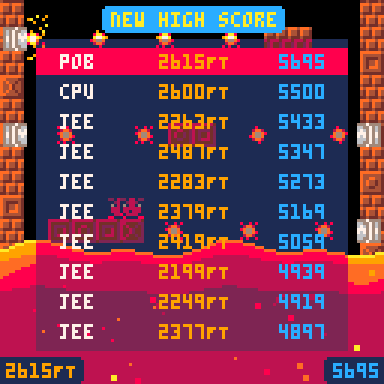 Next challenge is to push that CPU score off the scoreboard :)

I adore this game - so simple but so addictive.