for the 3rd anniversary of Celeste we made this new PICO-8 game in 3 days!

made by maddy thorson, noel berry, and lena raine.

This is incredible. Congratulations on everything you've achieved since the original release of Celeste.

hey nice to see that the sequel comes to pico8 first :D

Wow! What a surprise!

The more I played it, the better it got. Amazing work once again! It would be really neat if this were to be remade into a full game like the original, but I know you guys are currently working on something new. Either way, I wish you guys the best!

Awesome! It took some time for me to get accustomed to the rope as someone being used to Madeline's dash in the original Celeste Classic game. I haven't gotten all the strawberries yet...

Really solid game mechanics and graphics. It was a little too difficult for me sometimes, it is definitely harder than the original game!

This is phenomenal! You can clearly see the lessons learned from the "big" Celeste game. Wow. I have a sore thumb! I hope this gets patched into Celeste on the Switch :)

I didn't know what I was supposed to do here, so I found a way to double jump:

Well this is a pleasant surprise, wonderful work!

A perfect game, i wish i could develop this game with you

Managed to get my personal best under 10 minutes and under 100 deaths! I think it's a little more challenging to get all the strawberries, though.

This is actualy so weird, it feels like a dream. Dont get me wrong, the game is fantastic but my mind hasnt processed yet that "Celeste 2" just came out, and on the PICO-8. On the game itself it was great! The snowball mechanics were a little bit weird at times but it didnt inpact the game.

I'm not sure how @Scrubz got 16 strawberries, but I've tried getting as many strawberries as I could! The strawberry in the room with all the snowballs falling down was pretty tough. Usually I mistimed snowball jumps, and I didn't fall down at the correct time to bounce off the falling snowball, collect the strawberry, and wall-jump out.

I managed to get this personal best on 15 strawberries:

And improved a little more:

Yeah, a good chunk of the time on that one room.

Great! I had lots of fun playing this one.

Have been improving my personal best of 0 strawberries! I don't know what else to say.

'<3' love it. as a gamer, a newbie game programmer and an aspiring game creator, this game is just all types of amazing. definitely an Extremely OK game. '<3'

Incredible, thanks for this surprise :)

This gives me the feeling of an old megaman game, including both the things I would expect people who like megaman to like and all the things I really don't like about megaman. That first area having a fake platform, for example, is inconsistent. Falling as scripted leads to a new area, but falling just a little earlier into the same pit leads to death. Then, the new area has 3 different ways that the player can go off the screen but 2 of them (the first 2 I tried by the way) go nowhere.

I find it bizarre that the game starts off with the ability to turn around and find a camper off-screen, as if exploration is encouraged, but then gates the player later at arbitrary screens. I tried looking for something to help get one of the strawberries in "level 1" and suddenly found myself in "level 2" with no way back.

So does this mean we're getting Celeste2?

Great game to speedrun casualy! Sub 3 is possible, but I wonder whos gonna get it first...

This run was amzing! This was a fun game to speedrun but im gonna stop for now.

Now under 10 deaths! Still haven't gotten a sub-3 yet. You sure did better than me, Mr. Human!

Ha! I can't get past the first level in 3 minutes! You guys got some talent! Also, I am so proud of you Noel for making such a beautiful sequel to Celeste. I've been loving your work since I started Pico 8 and you've brought so much joy to me! Thank you for being awesome!

Finally got all 16 strawberries! I can't believe I didn't know about the opening in the ceiling in Level 1 in that it actually took you anywhere.

As you can see, you need to use the rope/hook to get up here, after you jump off the upper-most 1x2 platform with the spikes on its left side. 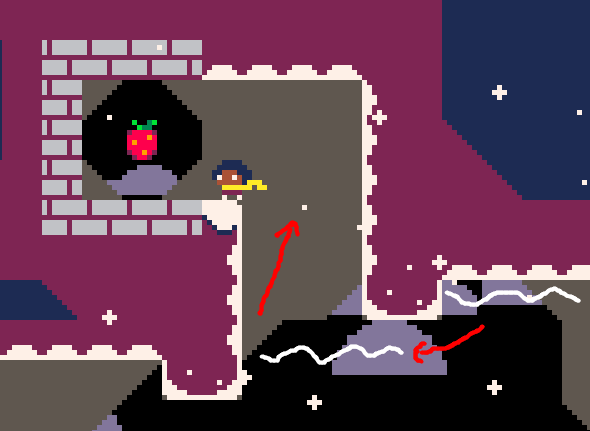 Let me know if you found out this path before you saw this post!

i got a ? for you are you going to make celeste 2 a real game? or an update for celeste i would realy love to see this as a game for switch and also i would love it since the pico-8 of celeste is in the actual game it would be nice to see a real celeste 2 for switch or pc but i love you game

thanks for the kind comments everyone! glad it's been fun :)

i got a ? for you are you going to make celeste 2 a real game?

We don't have any plans for more Celeste related games right now, but I'm glad you liked it!

2nd playthrough and 1st time to get the last 2 berries: 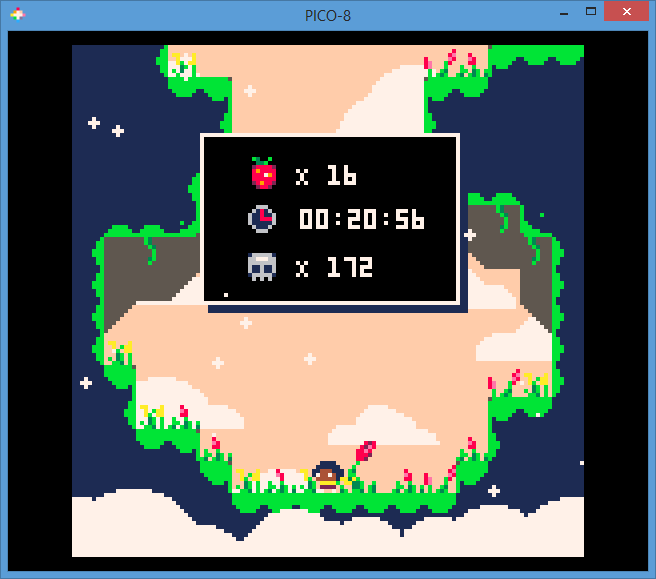 Better run! It didn't take me much time to get used to the changes in this new 1.1 update.

Whats with the spikes at the beginning of level 3? I played this yesterday and they were not there

@N1ghtshade The 1.1 update got released.

First run completed
2 Strawberries
00:38:25
504 deaths
and a whole lot of cursing at the final bit of level 3 with the spike block jumps

New PB for me as well! 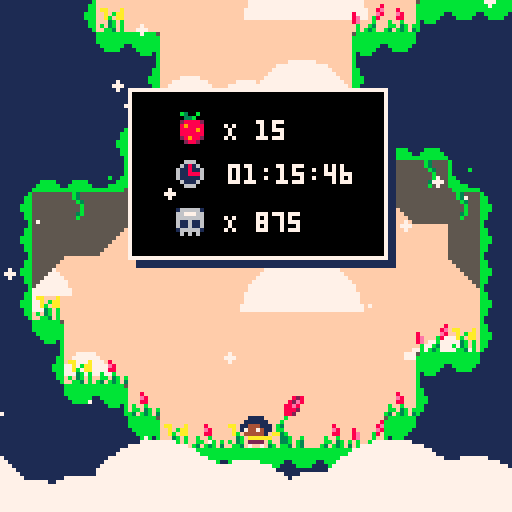 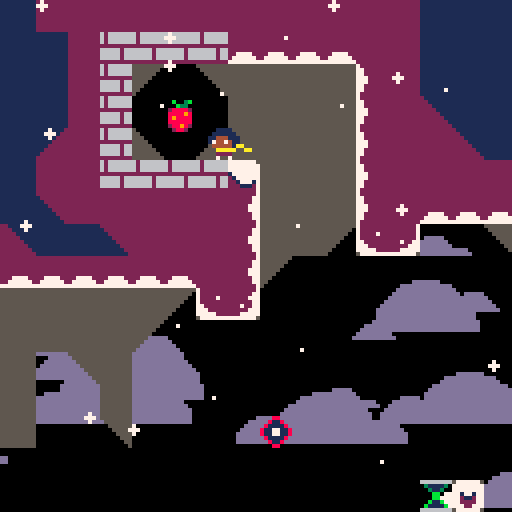 Oh wow, I did MUCH better my second playthrough 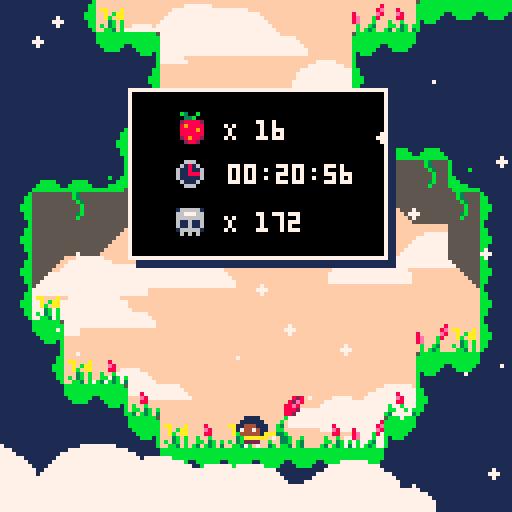 Wooo I finally finished! I could have improved a lot, but I'm still proud of myself.