ISLANDER is an idle crafting game inspired by games such as Forager and Minecraft. Use your pickaxe to mine any and all materials you can find, and craft your way off the islands.

[9/12/2020 UPDATE]
Added New Game+! Once you Escape the Island, press Return to Game to continue playing with new recipies and goals!

Design, programming, art & audio by @CarsonK
With help from the lovely folks in the PICO-8 Discord

With 2 obsidian left to collect, I accidentally reloaded the tab...

I love it! Cute graphics and it got me hooked straight away. I hadn't played minecraft or similar games yet. What does the word "idle" come from in this context? Is something automated compared to for example Minecraft?

@Hofnarr The reason I classify this game as an "Idle Crafting" game is because you have to wait (idle) while things craft, and wait for things to spawn after you've cleared an island of it's objects :)

This is super fun! Nice work and thanks for sharing. I really appreciate the save system!

This is neat, absolutely love it

Great game! Very entertaining! However, I encountered a bug: when I got the boat it sailed through the land.
Congratulations!

Very nice! The UI is great and easy to use. I also appreciated the option to turn off the camera shake because it was a little disorienting. Congrats on your game!

Nice job! I especially like the menu/crafting interface, it's simple, intuitive, and a great use of a small number of buttons =).

I do have one small suggestion, you might try speeding up the pickaxe animation a little and adding more emphasis on the impacts, this would make the waiting for processes to complete feel livelier and more engaginng.

Oh, it looks like the animation might speed up as you upgrade your abilities, I guess that works.

This is a really fun game. I love the graphics and animation. It reminded me a lot of Stardew Valley, and Minecraft obviously, I haven't played Forager so can't comment on that. I recorded this playthrough/review of the game, but only realised after I'd finished that you can turn the waves sound off--which was the my only real gripe--d'oh! But yeah, I really enjoyed this game. I usually expect the menus to get in the way in a game like this on Pico-8, but these are really well done and don't get in the way of the gameplay.

THIS IS AMAZING!!!! BETTER THAN VILLAGER

this game is really awesome in general AND you can save your progress AND it gets updates!

Extra cool game also I found a glitch and also how do you make flags?

Nevermind I found it in the seccond gray island.

This game seems like a game called Forager! That game was fun so I hope this is too!

I've never been so proud to make a blimp. Great game!! 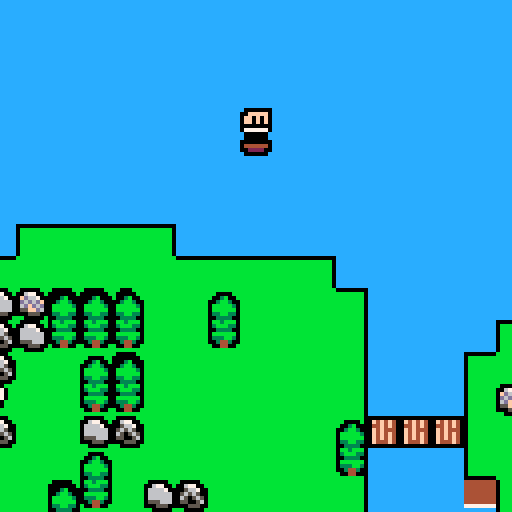 The game is really fun! I will sink some time into it on the P8 player ;)

Wow! This game blew up! It reminds me of minecraft! Really Fun

Awesome game. One thing that would make it better would be if you're holding the action button when you move that you don't change direction.

I really like how the terrain can be manipulated to your own will. I wish I had realized that before I used all those trees to make bridges. A lack of wood was a serious problem in the end game until I discovered the item duplication bug.

@Gabe_8_bit pointed this out already, but there is an item duplication bug. The way it works is this, if you have 2 stacks that equal more than 100, then when they should overflow, instead they duplicate, and same for taking them out.

I also managed to craft a gold axe before I made an iron one, which messed up the achievements. I got stuck with the "build the boat" goal after I managed to build the blimp. Also, once you build the boat and go back in, you can't craft another boat because you don't have another flag. But, besides that, so solid game.

I decided on this play through not to waste any more wood than necessary to get the achievements so I could more quickly take advantage of the duplication bug. SO instead I shoveled the left most islands to nothing and used them as bridges that spawn stuff, and to build up the islands where I wanted them to get more of the resources I need. (By the way, the middle grade of islands are worthless.)

But, because I nuked the left most islands, when I went back into the game, it couldn't find any land to put me on. Apparently it stop searching after far too soon. Pitty, I was gonna build a maze.

i found a bug noone seems to have reported so far: when you press esc twice to get into game editor, then resume game, you can walk through rocks and trees lol
sadly not through water, as that would make potential speedruns completely broken

this does seem to mess with many other things, as bridges cant be crossed anymore after you do this. tried doing it while on a bridge, simply warped me to the last island i stood on

Any chance of this game having procedurally generated maps? idk how complicated it is.

Fun! Really that`ś all I have to say

Do you know a way to save on IPad

Finished my saved game today. I enjoyed it a lot. I found myself wishing I could deconstruct old bridges into wood, because I had a little trouble waiting around to get enough wood to build the boat at the end. Secondly, does mulch do anything? I tried to set it down and hoped trees would grow when I was trying to find wood. Maybe there's something I didn't discover. Very nice game, and I dramatically prefer it to Minecraft.

Ok I have no idea how to find the "grey material" you need in the game+
Also, the goals in the game+ are broken... it still just says escape the islands.

Without a doubt, this poker game is actually satisfactory, amazing! I played it to sort out some way to genuinely play poker. The solitary thing here is that in this game, you are never going to have the choice to get real money. Club are the singular sensible way to deal with get cash by playing or wagering. You can do it on stages on the web if you are wanting to do stuff as I do, check https://davedealer.com/ and search for strong and trust locales to play in. There, I am constantly getting cash, by playing poker, yet furthermore by wagering. I basically have days when I sense that I will win some huge dollars and it's about my lucky stars, they never lie to me!

amazing! it is really cool and is giving me 2d minecraft vibes!