Dominion Ex is a vertical-scrolling shoot'em up. Fight 14 different enemies with 4 weapons over 3 levels of space action. (That's 168 pieces of fun!)

It features two difficulties and a ship upgrade system to allow for different play-styles and strategies. 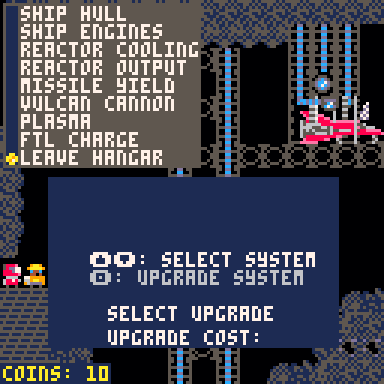 Some enemies are immune to certain weapons. Look out for blue forcefields!

If things are getting too intense you can use the FTL drive to escape to the hangar and make some upgrades to your ship. This was a lot of fun to code and a big learning experience. So let me know how you find the game!

v1.11 - Fixed an issue where game would hang in the hangar (haha.) Particles now clear properly when visiting the hangar. Added a hint for how to get to the hangar for people who don't read the description on Newgrounds.
1.1 - Added many particle effects. Overhauled and simplified title screen menu. Added more feedback and info on the HUD. Added level names. Brightened up blue enemy projectiles. Adjust orange enemy projectile spread. Added overheat sound. Added some simple tutorial text. Added a highlight effect to life and coin power-ups.
1.01 (unreleased) - Fixed a bug where high scores were not recorded properly. Fixed a music bug after fighting a boss.
1.0 - Initial version

Familiar yet unfamiliar. I like the feel of there being unknowns I have to learn via trial and error.

Good shooter. Definite learning curve here. Interesting - including the SHOP where you can purchase power-ups.

All in all a good game. Gold star for you.

Fun. I wish that one enemy's bullet didn't look like my pickup, but other than that, pretty sweet!

This is nice! I don’t like bullet hells so the easy mode here was great to play. I wish movement was a little faster, so I’ll have to try the other modes.

@merwok Glad you enjoyed it. You can upgrade the speed of the ship in the hangar if you're finding it a little slow but there's definitely a sweet spot after which your ship is too fast. I'm not keen on bullet hells either, the ones where you're just threading your ship through some crazy geometric pattern of bullets. I have neither the programming know-how nor the inclination to do anything like that so I was definitely modelling the game after less hardcore oldschool titles like the top-down bits in the Thunderforce series.

This is a lot of fun to play, nice work! (and I like the 'frantic' tone of the music when it gets busy)

great game! had lots of fun with it.

This was a lot more fun than I expected it to be. The hangar is such a unique feature!

@extar Your game Dominion, is one out of a few thus far that inspires me to learn how to make something of my own with Pico-8!

I absoulety adore this game and it is hands down one of the most enjoyable shooter/STG experiences I've had in a long time! I would love to learn from you if you have time, your inspirations for creating this game! Correct me if I'm wrong about this, but I believe one inspiration comes from an old game called Missle Command! That's what the chaining explosions from enemy ships reminds me of. It blew me away when I realized that one well placed shot in a congested area can turn the tide of this epic battle!

I LOVE THIS GAME!!!! Thank you for taking the time to put the love and polish into this game. Your creavity and attention to detail shines through in every second of gameplay!

Playing this game again. I now know what it is that draws me back to it. No enemies fly off the screen.

That is most games in a topview shooter appear at the top, work their way down, and eventually vanish off the bottom of the screen with no penalty to the player.

In this game they do NOT. They bounce and move around and will not leave you alone until you destroy them. Obviously this means the longer it takes you to defeat them the better the chance the screen will fill up with new enemies.

Making it that much more challenging to play. That and powerups every level make this a shooter to be reckoned with. Because of this it is now one of my favorite shooters. Super work, @extar.