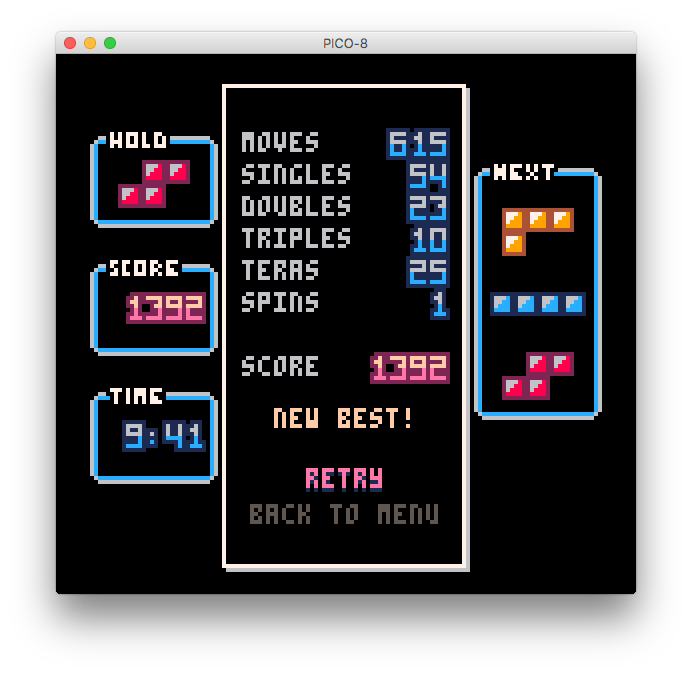 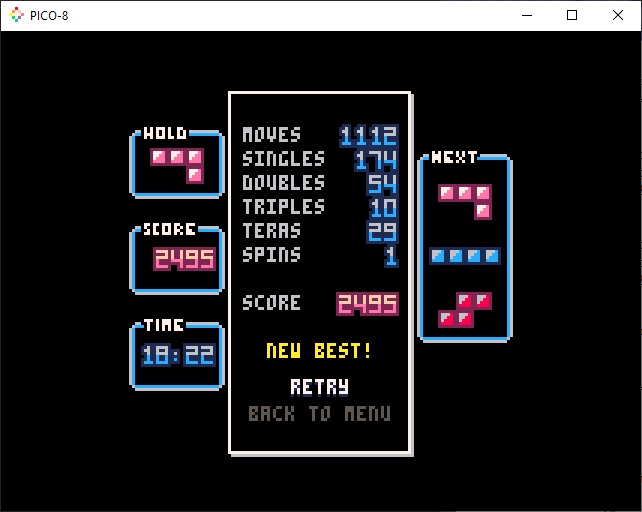 tetromino gang (wat) here, got ~1900 on first try. it's always nice to have a new modern tetromino game with good handling but also not completely copy-pasting srs.

though there's still some bit of defects:

the O piece is spawns with 1 grid bias to the left. (although, Atari has their I piece 1 grid to the right)

ISZ are initially all flipped, so, in air, CW/CCW rotation leads to left/right bias.
there's room of choice (and yes some old BPS T® just followed this scheme), but there's also T® DX, that spawns ISZ "facing" up while JLT facing down, and they rotate identically to SRS (except for wallkick).

another game to mention is DTET with its famous 3-positional ISZ, although it's overall ARS-flavored, it also followed CCW-for-left and CW-for-right bias.
it also use only 2 rotation buttons and Z+X is for 180° rotation (works like Z+Z when first rotation succeeds, otherwise will try real 180° rotation), no hold function is present.

imo it's better to use DX spawn position, base rotation with SRS wallkicks. although, SZ under high gravity on the ground still rotates weirdly due to SRS wallkicks...

i can feel the complete "buffering" of actions during the ARE (i.e. spawn delay) that tries to implement what we call Initial Rotation/Move System (but seems no hold :x) but unfortunately it might need more detailed tuning. from a (fast?) player's perspective, i encountered both "kept pressing ←/→ hard but the next piece doesn't move at all" and "already released before the next piece spawns but many repeated ←/→ are buffered then bang i can't predict where the next piece will appear".

this is truly THE detailed part for the tetromino game. of course different implementation exists, but some feels better. the basic rule is, the game got to identify the intent of fast players on how to move the next/active piece by the keystrokes received, that may or may not appear on the right time.

rotation should not auto-repeat, generally....

IMS (some other name is DAS precharging) is even more complicated (to name some good example, DTET and Quadra made this well). some general idea as my preference, the IMS should buffer (at most) only one horizontal move (only the one by keydown event that happened DURING the ARE), not the auto-repeated ones, especially those "leaked" from the previous piece when harddrop is pushed before the move button is released. but after the next piece spawns, if the move button is held long enough, das should go on (no matter it's newly pushed during ARE or lasted from the last piece)

more details coming, like Quadra cancels any buffer and never accept more if opposite moving/rotation happened during ARE, DTET cancels (actually shrinks) ARE if IxS is triggered. dot dot dot.

some tuning will help making tera capable of being even harder. decreasing lock delay rocks 8)