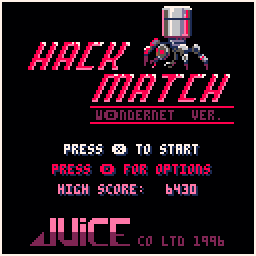 HACK*MATCH is a mini-game in EXAPUNKS, a programming puzzle game by Zachtronics. When I first played the mini-game I loved it, and thought that it would work really well on PICO-8. This is my own version of the mini-game with some slight modifications.

The goal is to connect 4 or more of the same coloured piece. There are two ways you can do this, by either picking pieces up and putting them down in a different location, or by swapping two pieces, either the two above you, or the one you're holding and the one above you. The game takes some getting used to so it might take a few rounds before you're comfortable with the controls.

Mark as Abuse
Just Another Snake Game 1.0
by deadpixl

This is my first game with PICO-8 and it was mostly made as a learning experience, but I'm happy with how it turned out. The particle effects were inspired by Tera: Mind over Matter, although aren't quite as refined!

I would love to have the ability to make API requests from PICO-8, and I think it would open up loads of opportunities for projects such as home automation controllers, carts that retrieve information from publicly available APIs such as weather information, etc.

The only example of networking functionality that I've seen in PICO-8 so far is using WebSockets in browser-based carts, and while HTTP requests would also technically be possible in web-based carts I would love to have this be a feature on local carts.

I can understand that some users may not want the carts they download to be able to make HTTP requests, so perhaps this could be an optional feature that you enable in the config or via a command-line argument.

Anyone else have thoughts on this?