Break me off a piece of that Soylent (TM) bar!

Help Old Ryan travel back to the past in this challenging puzzle game!

Make matching color groups of 4 or more Soylent pieces to annihilate them and expose the reactor core, which you can then use to convert a Soylent bar into energy. Create enough energy to travel back in time!

Note: I designed the game around my USB iBuffalo Famicom controller, which has the buttons as XO from left to right. If it ends up being opposite on other peoples' controllers or expectations, I'm sorry!

Also, keyboard users: Use the arrow keys and x/c to rotate.

My 3rd game! As a big fan of Tetris, Dr. Mario, and Super Puzzle Fighter, I have always wanted to make my own puzzle game. I also always wished Dr. Mario (NES) had a hard drop, so I wanted to make a puzzle game with one. For a while, I had toyed with the idea of making a game set in the future portrayed in the cutscene from Super Lunch-Out 2 Turbo. I also figured if I ever made another game, that it should actually use all the buttons for once. All of these ideas came together one Saturday, which began with studying how Tetris is programmed (since I had no idea how to even start), and which after a couple of weeks led to the game you see before you!

Along with the goals above, I wanted there to be something novel about the game mechanics. I don't like playing for points, and I didn't want clearing just for the sake of clearing. This is where the idea for the "reactor core" started. Instead of just clearing pieces, there is a reason for clearing them, as advancing the level requires you to fit a piece through a small hole at the bottom of the playfield. To prevent the goal from being too one-dimensional, I further incentivized being neat about it by making all the leftovers hurt you in the form of garbage pieces. This turned out to be a fun twist, as now you have the choice of leveling up, balanced between clearing potential garbage and not making more by waiting too long. At higher speeds and later levels, it encourages perfect playing, where clearing before leveling up is essential to avoiding catastrophe.

I also wanted it to make some sense as to why things disappear/appear and what the colored blocks even were. I eventually conceptualized "Mr. Disposal", which uses anti-matter to create energy, a necessary component for time travel, but that doesn't really work well when fed Soylent (not even machines like eating it!).

Having played the best puzzle games ever made, I spent a lot of time playtesting to make sure it was challenging but fair, and making the controls very responsive! I was inspired daily with new ideas, all of which I managed to figure out how to put in the game, so I hope you find all the little details that I hid away (especially for beating it), and enjoy playing! Thank you!

This is super fun with lots of polish. Good music too.

This is really cool. I ran into an error when I dropped a piece into the reactor core. 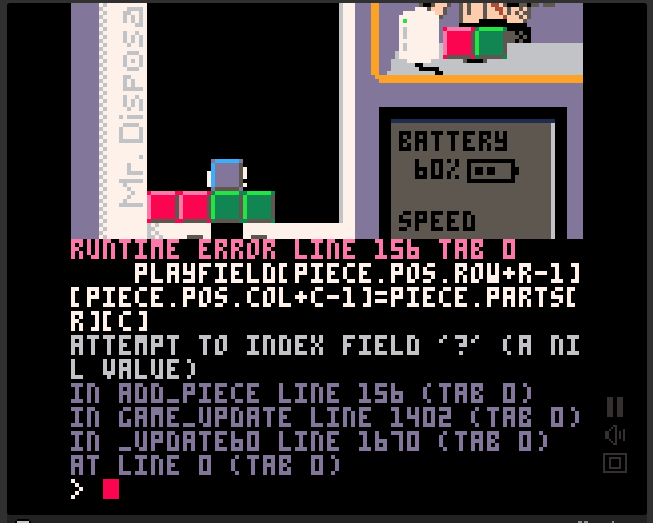 @ToyCrab Oh no! I saw that error early on, but I could never recreate it, so I figured it worked itself out. :( I guess I will have to try and fix that.

Ok! I managed to figure out what was going on and fixed it (I hope). I also made it so dropping a piece locks it in place once it touches, instead of waiting for gravity to pull it. As it turned out, everything related to pressing down to drop a piece when it was right above the reactor core. The reason I missed/forgot about these things was I always hard dropped pieces during playtesting!! LOL whoops. Thank you for reporting the error!

Has anyone beat it on Ultra?

So I just ran into this game and it is really fun, great work!

Great work! Really enjoyed the game and like the music and polish. Good stuff!

Thanks for the compliments, everybody! I'm really glad others have enjoyed playing my game.

I hope others manage to beat Ultra someday!

What a great game! Really polished, and I love the mashup of Dr Mario and Tetris. I lost track of time playing, which is always a good sign. Looking forward to playing more! :)

This music is so popping. Very Earthbound esque, the whole game's vibe lends to that as well. A big fan of puzzle games here. Going to actually download and sit down and give it a go instead of just checking it out in browser. I hope using a controller isn't considered cheating for ultra mode. D;

@Cabledragon: Thank you!! I am really proud of the music, since making music is really hard for me! And of course it's not cheating, "Gamepad Recommended"! Good luck! Let us know if you pull it off. ;)

Hard as nails at least for me but quite the challenge.

Big THANKS that you can match any direction at all. I never did like COLUMNS in that you could only match with a column. The match in this game is a lot like PUYO PUYO which is excellent.