You are Poke, the Mongo: Trickster spirit, consort of Lightning and Thunder.

For seasons uncounted, you have abided unseen among the bright mammals. On occasion, you've lent a jolt of inspiration where it amused you. But to your dismay, the primates learned to perceive and capture your sibling spirits. They harnessed your aspects in spark & wire to commit their crimes.

There is hope: These children are not patient. Given enough resistance, they abandon this game for another.

So, the duty is yours: Struggle against artifacts made from your own nature. Frustrate the monkeys until they set aside their toys. Free your brothers and sisters.

Update (v1.0): I've been working on this long enough - let's call it 1.0! Helpful message when Lightning is ready. New animated screens for defeat and victory!

Update (v0.10): Been slacking, but here are a couple of bars of music for the dodgeball mini-game.

Update (v0.9): Added sound effects and a little music. Came up with a short cover version of the walking music.

Update (v0.4): Now you can bounce the ball back at the baddie for an extra stamina heal bonus - hit UP just before it captures you, but not too early! Baddies shake more vigorously in frustration. A few damage values have been tweaked to make things just a bit easier.

Update (v0.3): Dodge ball encounter is harder - now you have to dodge side-to-side and duck! Frustration meter removed and replaced with salty dialog!

Update (v0.2): Now, with an actual game goal and backstory! Frustrate the players until they quit!

"You won! This screen sucks!" hahaha

This was pretty entertaining, but really easy. Maybe you could make Poke's movement not-instantaneous so it's harder to dodge. Also, it seemed like you could move in any direction you wanted in order to not get caught.

Thanks for trying it!

Edit: Oh wait, you meant instantaneous dodging. Yeah actually, adding some movement & transition to the dodges would make it look better & add some challenge. Thought maybe just popping back & forth would feel more "trolly", but actually having some motion would be good!

And, I was thinking of making dodging harder. Throws to either side would catch that side and center, so you have to dodge to the other side. Throws down the middle catch all three sides, so you have to push up at the right time to bop the ball back at the baddie - and maybe get a stamina heal bonus for the skill move. There's also a duck move down, which I might keep in for an easier middle dodge but reduce the stamina healing to zero because it's a cheap move.

I really like the dodging game, with 5 different types of throw it certainly makes you think fast.
Has anybody beat this without getting the "Rest then press X" screen?

I've beat it a few times while testing, but the baddies might last a bit too long right now. Really needs a good going over to tune the difficulty, after I finish putting in a couple more game mechanics (i.e. the lightning and the thunder, some candy to keep you going, and baddies bringing in friends)

I can imagine the gameplay emerging already.

Suddenly, a trainer drops a lure, and 5 new trainers appear on screen. You can't avoid them to reach the candy! CAN YOU SURVIVE THE ONSLAUGHT OF POKE BALLS?!

now we need an endless mode and stamina as pictograms!
( maby even turn it into an rpg!!! )

"You won! This screen sucks!"
That was fun in every levels! The tune's catchy too. Good job!

salt: "I lost, this screen sucks!" (based on the win screen ;P)
salt: "Im sueing the mongo company"

I really liked this! The dialogue is good, but I love how the humans emote - some great shakes going on!

I think your core game is great, but you still have some communication issues in the game. I played this before I read your instructions - I got the idea that I was a monster and the humans were trying to catch me, but I didn't know I was SUPPOSED to encounter them. I just walked around getting hearts until I read your description. Also, the smoky animation that occurs when you frustrate a human is odd - shouldn't they (or their phone) burst into smoke? Also, the smoky animation plays if the human runs out of balls also - but it doesn't mean you beat them!

I like this game so much, I made two edits to some things that bugged me - (1) diagonal movement will now move at the correct speed (you can't go 'faster' but moving diagonally), and (2) I fixed the collision detection so you will 'slide' along buildings a'la DOOM rather than sticking to them.

I really hope you keep working on this! It's a pretty fun game. I love the dodging mechanic - seeing that ball come out you is awesome, and it has some great spin on it! I also love your animations. Keep at it!

EDIT: attempting to fix your entry by deleting this, since you now have the changes

This is pretty fun and addicting, I almost didn't click on it though as there's no preview image of the game! I'd recommend pressing F2 before saving your carts to take a screenshot, it makes it a lot more appealing.

> I almost didn't click on it though as there's no preview image of the game!

Huh, weird! I've got a screenshot on the cart: 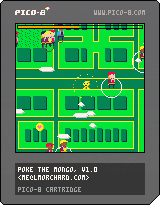 Wonder if I missed something else in starting the forum thread or uploading the cart? I'm pretty much a Pico-8 BBS newb.

> I really hope you keep working on this! It's a pretty fun game.

Thanks - and thanks for the feedback & tweaks!

I mostly started this as a joke and a way to get into Pico-8, so I finally just kind of called it "released" to get onto playing with another game.

But, also I think those are totally valid points that I miss because I've been playtesting it for a couple of months just by myself. Like, it's totally obvious (to me) how you play because I've been through a bazillion plays of it :D

I have a pile of further ideas for this thing, so more than likely I'll be back to it or release a "Super Poke the Mongo" sequel or something

Hi Imorchard. Not sure if you're familiar - there are =4= essential ways to run carts in PICO-8.

I've got a PocketC.H.I.P. and I see a screenshot in Splore Mode on there, too. Poking around to see if I missed spot.

Been testing a lot on there, and that also is why this game has pretty simple controls (e.g. didn't pay much attention to diagonals because those are super hard to do on PocketCHIP)

Oh, I think I see: The cart posted further down in the thread seems to have taken over as the screenshot for the whole thread! Weird!

I'm worried my upload might have ruined your pic :(. When I added a build of your game to my comment, I used a snip of where I edited the code as a screenshot for the game. I think when I included it in my comment then, it overwrote the default image for this thread. I would re-upload it now with a better screen-cap, but I dont have access to the files right now. Sorry! I'll delete my comment above if it helps.

EDIT - just saw your post! Would you like me to delete that? I don't want to delete it before you get a chance to look - only if your interested of course.

Naw, no need to delete it! Let's see if just commenting with my original cart changes things again:

Poke the Mongo 1.0
by lmorchard

Kind of silly if this works.

Edit: Huh, didn't seem to. Oh well. I do have a copy of your tweaks though, and will probably just roll them on into my cart on GitHub