Copy and paste the snippet below into your HTML.
Note: This cartridge's settings do not allow embedded playback. A [Play at lexaloffle] link will be included instead.
PicoKart 0.5
by electricgryphon 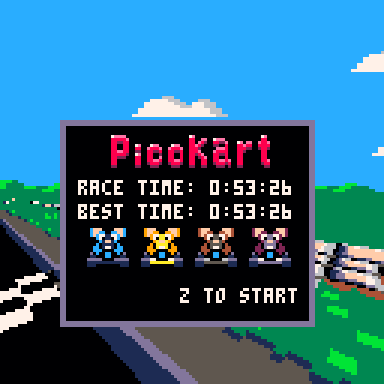 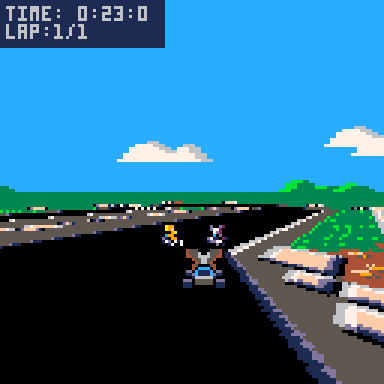 The beauty of it...
Please add Jelpi as a character.
However, that Gremlin is pretty cute.

Pretty great mode 7 game. I would love a full-speed-full-res mode 7 ... It only need some cloud in the sky and color swap other karts.
I tryied messing around in your code and you can gain a little bit more speed by replacing line(sx,sy,sx+h_step,sy,c) with rectfill(sx,sy,sx+h_step,sy,c)

Some clouds moving in the sky to help indicate turning would be awesome. Overall very cute / fun.

Very cool and plays really well, excited to see what more you can do with it.

really enjoyed this, can't wait to see how it grows.

I would love music!

In my mind, I envision something like:
Title/level select: devastatingly cheerful
Race song: "hard driving" is what my cliche-ridden mind comes up with
End song/victory: peaceful perhaps

Even one original song would be amazing though.

I really love this!

New Features:
--Music from Zep's "Droid Boots" for title screen
This is not a perfect thematic fit for the game, but it's an awesome song, so that counts for something.

--3 different tracks
This forced me to re-think the way that I was handling track and AI waypoint data. It ended up being much more robust as well as easier to edit. If there's interest, I can add more comments to the track code so that folks can make their own tracks.

--Improved competitor AI
The competitors spend less time driving in circles and can almost hold their own against the player.

--Sound effects
Engine noise has two different subtle levels and there are faint thumps and clunks when you hit a wall or a kart.

This is pretty spectacular from a graphical standpoint, as far as the PICO-8 is concerned. The AI is pretty tricky to beat at the moment if you're not familiar with racing games. I would love to see a larger map in this game; with a little more detail it would already be a decent kart racer (a countdown before a race starts, something to acknowledge how you placed in the race).

Are the racers furbys?

I think they are a cross between Furbys, Mogwai, and mice :-)

I noticed you turn at the wrong direction when driving in reverse.

So... just about 4 years later, I figured out how to make the mode7 racetrack render in full screen without skipping pixels.

There aren't really any changes to the game play.
Music swapped Zep's theme for some tracks from Gruber that seemed like a better fit.

The mode7 hack stuff is kinda neat though. Loops are unrolled so that I can write 8 pixels at a time with a poke4 command and reading pixels from the map is heavily optimized with the binary functions, which have reduced cycle costs.

Really cool, just needs a count down at start of race!