What's new: Less bugs, more sfx!
I consider it done unless you prove me wrong! (I still have a few tokens left ;D)
C&C are welcome as usual...

A soccer game inspired by kick-off and sensible soccer. (A friend told me it's actually football, but nevermind...)

Moving the player during corner or goal kick allows to control the kick direction and power.

AI is stupid, I'll try to improve it in further versions.
There's no fouls, penaltys, yellow/red cards. As tackling isn't super effective (and I'm short on tokens:D) I don't think they're worth implementing.

I hope you'll enjoy it and C&C are welcome!

Though the controls are a bit meh.
Never really got the feeling of having control of the ball. Maybe be a bit more forgiving and glue the ball to the player a bit more?

Nice! I got an error at one point though.
http://i.imgur.com/L0q42qy.png 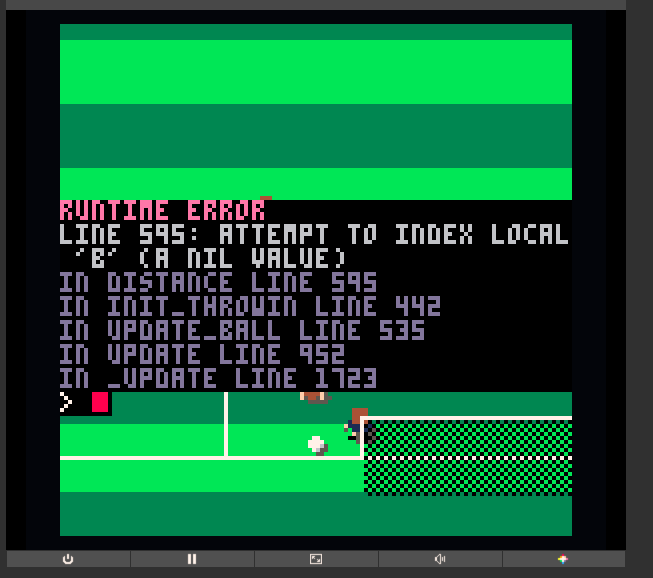 Really nice ! The A.I. s a little bit weird , but except this, really impressive and beautiful.

Thank you all for the feedback!

@johnnyri, you're right, I definitly need to improve the control of the ball.

@Noid thanks for the report. Did it crash during a 2 players, player vs cpu or 2 cpus match?

@arnaud_debock I've warned that the AI was stupid :-) Still I'd like to improve it!

This is impressive! I had fun learning the tactics for this game. I hope we can keep fine-tuning it for a while, it's a neat idea. The controls are pretty good. And I like the graphics! Just a few things I noticed:

The game will sometimes rapidly switches between selected teammates because the closest player to the ball will be in your control and then another player will run in closer and you won't realize the is switching to that player and it's disorienting. Sometimes two players on your team will even run neck and neck and it will keep swapping. An improved system for switching characters would be nice.

A minor bug (shouldn't be hard to fix) is how you can hit the ball around the outside of the goal and score a goal by hitting the back corner of the net.

And if you're going to fix one thing about the AI, let it be that you keep them from running off the side of the field with the ball, giving the other team a free throw-in. hehe.

I saw a tweet about this a couple days ago and I didn't even believe it. This is incredible, no idea how you made this, but it's incredible. Keep up the good work, I'm looking forward to seeing where this goes.

But I haven't enjoyed playing because of the controls. I will try again.

Please keep working on it!

You should make it so ball "sticks" to the player character until he/she kicks the ball. So you can easily rotate around.

Also how about changing player with X (when player is not in the control of ball). This would resolve disorientation of auto changing player to the closest one (after pressing X you'd still get closest player).

Incredible work! I've made some sfx like a starting whistle, crowd cheers, shoot and ball hit sfx that you can use if you like:

Link's in the video description. You can copy the sounds and patterns over with a text editor, it's real simple but you may already know.

Hi guys! Thanks for the feedback!

@Connorses, matt & darkhog : Atm, I'm adding missing features while strugling whit the token limit, but improving controls and AI are coming next. Nevertheless, I'd like to stay as faithfull as possible to the sensible soccer feel. Without sacrificing playability. omg.

@Pizza : Incredible! Now I know why I love pizza! I'll integrate you sfx asap. In fact I have started doing my own but I really suck at it... So yours are coming in handy! Thanks again!

Yeah! Glad I could be of service. Feel free to ask if you want some changed or added. You're also free to edit them yourself of course.

I'm new here. Can I get a glimpse at the code to understand how this is done?

You can do so by clicking the game's thumbnail, downloading the resulting .png image and open that in your copy of PICO-8.

I'd add also pseudo-3D thing when you're near goal, like in NES' PowerSoccer.

@arnaud_debock: Thanks
@darkhog: Nice idea but I don't have that many tokens left!

You know, you can easily get some tokens at the cost of readability by replacing all no parameters, (), function calls with "". Because () costs two token and strings are always one token. So for example

Obviously it works only for functions with no parameters and only in function calls and not in function definition (so you can't do something like function do_something"" end). Hopefully this tip will let you shave enough tokens to implement this. If not - or if you're already shaving tokens this way, ability to set teams' shirt colors to whatever color you want is a cool idea too!

Thanks for the tip!
I'll have a look at changing jersey's color... I was already thinking of randomly changing hair and skin colors...

This game is endlessly amusing.

Actually! It turns out Pico-8 does have 4 player support built into it now, so you could totally make a mode where there's two controllable characters on each team, if you have any tokens left for that kind of shenanigan at all...

I may try this when I finish the game I'm working on right now...
By the way, my next game will definitively have four players support!

God Job this is my gameplay..
https://youtu.be/Gp34jWyCAZU

You have the players facing in all 8-directions and in 8x8 pixels too !

Another discovery via the Lucky Draw. I had a lot of fun with this. It's cool how when you start a game the players all return to their starting positions. The 'stupid' AI was more than a match for my complete lack of talent. :)

There was some odd times where I was given a corner instead of a goal kick, but other than that, really cool, smooth game.