You are one big monster with a thirst for destruction. This quick turn-based roguelike PICO-8 game is all about stomping, smashing, grabbing, and chomping your way through a procedurally generated hapless city and its tiny citizens.

The mobs will move once you perform an action (movement, roars and abilities).

Score tracker at the bottom right shows "current points"/"points until next powerup".

Mobs have a chance to spawn every other turn (except for civilians) and the max count is based on your kaiju's destruction.

A lot of fun! Nice twist to the roguelike genre!

"All things must come to pass."

Looks like we sent that monster packing. Superb turn-based game. A little tricky to play but once learned its quite enjoyable.

Once I figured out the mechanics that was a ton of fun! will come back to play this more later

come to think of think i never seen a dinosaur kaiju, i mean sure there's godzilla but he's more of a lizard creature than a dinosaur so my point still stands

This game is so addictive! I'm a big Godzilla fan and this game has brilliant gameplay, one of the best I've seen in the kaiju genre.
Great job!

Well done, what a great, fun game! Thank you!

did not get to the mad scientists tho, will have to try again

So, am I correct in saying that there's no real ending to this game? I destroyed all the buildings and trees, and then it just kinda kept going. But at that point, it was too easy to keep surviving indefinitely... 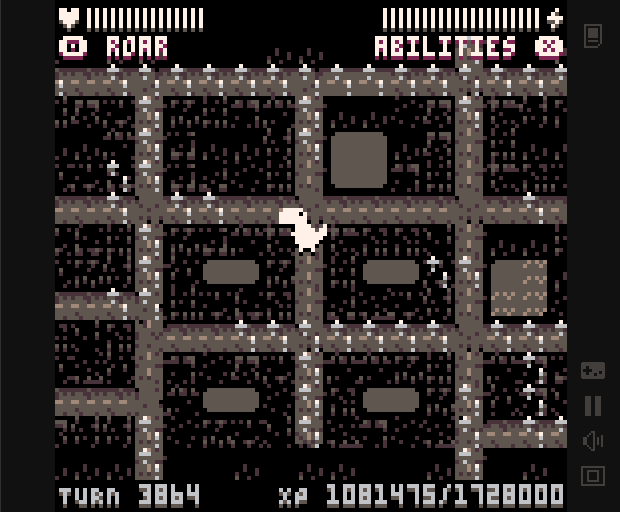 Looks like I have to tweak the difficulty for late stage.

Though I need some more tokens for that unfortunately.

Amazing concept! I love the logic behind the enemy behaviour- copters can’t fly over skyscrapers, tanks won’t fire past buildings or cop card but will shoot through copter spaces, etc. I noticed one possible bug - using Throw seems to reset your combo counter?

Just wanted to chime in and say this is one of my absolute favorite pico-8 games and I keep going back to it. Absolutely brilliant. Plus I love that Night on Bald Mountain was used on the title screen. Epic.