I have no idea what to write here

I wanted to try out physics in PICO-8, so I made this!

A short minigame about landing a spacecraft on a planet.

Use left and right to move sideways, and circle to use your main engine.

There is also a brief tutorial to let you get used to the controls.

I'll release this on itch.io soon!

PLEASE DO NOT TRY THIS!!!

You may end up with files or folders that you cannot remove.

(I don't wanna be responsible for damages!)
Edit: It turns out there is a way to remove them, see below.

Not many people know this, but there are some folder or file names that Windows won't allow you to use. These include 'con', 'aux', 'nul', 'lpt0', and others. Seriously, if you're using Windows right now, make a new folder, and name it "con", it will tell you "The specified device name is invalid". (This is safe to try since the folder never actually gets renamed) 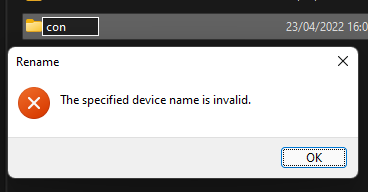 Through curiosity I discovered that PICO-8 completely ignores this rule and allows you to create folders or files with these names using the 'mkdir' and 'save' commands. Naming a folder 'con' seemed to have no issues other than refusing to be opened by the 'folder' command, however once I named a folder 'nul', it became impossible to remove. Windows prevents you from renaming or deleting it, so I now have a folder that I can move around, but not remove, rename, or open. 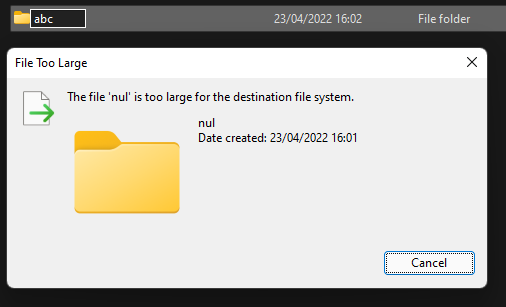 *This is what it shows when trying to rename the 'nul' folder. The folder isn't 'too big', Windows just isn't designed to handle this situation.

EDIT: Thanks to @2bitchuck, you can remove these folders by opening Command Prompt and typing rmdir \\.\C:\path_to_folder /s, replacing "path_to_folder" with the full path of the folder.

The only solution I can think of is that PICO-8 checks whether it is running on Windows, and prevents the user from creating illegal folder names.

There are 4 playable "stages", each with a different song and color scheme. After completing all 4, you have the option to restart in endless mode. You reach the next stage after the snake (known as "Snek") consumes 50 food (known as "Snak"). If Snek collides with the wall or their body, they revert to the beginning of the current stage.

There's some hidden quality of life improvements too, like queueing button presses if you press too quickly, preventing misclicks when sliding adjacent to a wall, and giving a short grace period before a game over.

Let me know what you think, there's always room for improvement! I'm somewhat new to PICO-8 and Lua so my code may be a little rusty.

Pin To Profile
:: Unfold ::
Conway's Game of Life
by megabyte112

My first ever PICO-8 creation, spent about 2 days on it.
Conway's Game of Life, made in PICO-8.

Place/Destroy with O
Pause/Play with X
While paused you can draw your own patterns and watch how they evolve.