My posse's on Broadway 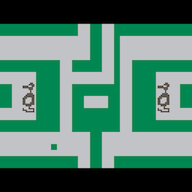 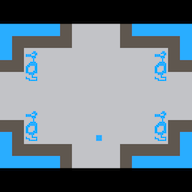 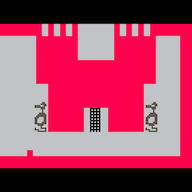 [UPDATE v2.0] Have you ever wondered why Yorgle is afraid of the yellow key, or who exactly is the Evil Magician? I mean whats his deal, has anyone ever even seen him before? Now you can finally go face to face with him and find out! There is one catch,.. you'll first have to locate him and his lair hidden deep within the Kingdom. Are you up to the challenge?

An evil magician has stolen the enchanted chalice and has hidden it somewhere in the Kingdom. The object of the game is to rescue the enchanted chalice and place it inside the golden castle where it belongs. This is no easy task, as the evil magician has created three dragons to hinder you in your quest for the golden chalice. There is Yorgle, the yellow dragon, who is just plain mean; there is Grundle, the green dragon, who is mean and ferocious; and there is Rhindle, the red dragon, who is the most ferocious of all. Rhindle is also the fastest dragon and is the most difficult to out maneuver.

in game:
UP/DOWN/LEFT/RIGHT move player
Z drop item
X special use discoverable inside evil magician's castle
Z and X pressed together bring up an in game menu to change difficulty and reincarnate

A word of caution with the in game menu is that the Kingdom is always operating in real time. In other words, the dragons and bat do not pause while the menu is open (or after you have been eaten for that matter).

This was for me a really fun game to recreate while learning how to make a game in pico-8. It took me about a month to build version 1.0 while teaching myself about OOP, collision detection, map changing and very low level AI logic.

Boing! is an Amiga themed YASCL (Yet Another Sqaushy CLone) cart. I installed pico-8 and got started by following along with the Squashy article from Pico-8 Zine #1. After I finished the article, I wanted more, so I began playing around. Eventually, I created an Amiga theme by adding sprites, a map instead of a solid background, a Boing intro screen, and a guru meditation crash when the game ends. It may not be immediately obvious, but the player's final score is displayed as the first half of the guru meditation error code.

It still needs music and perhaps a cracktro ;)