Nurikabe is a Japanese puzzle game where you must determine which blocks on a grid belong to the islands and which belong to the sea with each island being denoted by a number indicating it's size.

Includes a quick tutorial which explains the rules in more detail.

Read more about Nurikabe on Wikipedia

Nice! I'm quite bad at it since I have yet to figure out some of the strategies (hopefully by myself)

I would say the puzzles need to be random but since there's 51 of them it's not a real downer ;)

I made a cart not unlike this if you're interested: minefield

It seems like an interesting puzzle and I understand the rules, yet you cannot mark the digits as part of the solution ?

I tried the first puzzle, the 3 beneath the one. I tried marking two dots to the right and check solution. Got back red.

Red number means I suspect it is wrong.

Tried the (X) button to fill in two squares to the right of the 3 replacing the dots. Also gives red.

You might video record the opening of the first level and showing the red disappear in checking solution so the player can see how it's done. Let me know if you need help on how to auto-record video in Pico-8.

dw, the marks (with O) are only there to help you figure things out. the digits are always land. try filling (with X) the cells right an down from the top-left 1, it will show up as black when checking.

The digits are always part of an island so there's no need to mark them. The game only validates your marks against the rules; it has no idea what the actual solution is, only whether all of the checks pass. Plus it only really cares about what you've marked as water, the dots are just to flag what must be land.

I had no idea it let you record a video though, that's really neat!

This is just after I've surrounded all of the 1s and filled in any space that's between two numbers.

Since all of the water has to connect the blocks I've filled in on the left between 1, 3 and 2 have to grow to the right.

The block to the right of the two has to be land as otherwise there would be a 2x2 patch of sea. It's the same for the 2 in the top row.

@ultrabrite I wouldn't even know where to being writing a generator for these puzzles, they're taken from an out of print puzzle book I've been working my way through for years.

@mmawdsley
fair enough! then there's a trick you could use to add some replay value: randomly rotate the grid left, right or 180° and then additionally you can symmetrize it vertically or horizontally. that's 12 ways the same grid can feel different.

on another note, I'd suggest an unlocking system to make it a little more enticing. for instance, say the first 3 levels are unlocked from the start and then each following level unlocks when 2 of its 3 predecessors have been solved.

just a few ideas if you want to expand a little on an already nice game :)

This game is super pretty! The perfect aesthetics for a puzzle game like this. And that title screen! Fun as well, but man this is good looking.

Got through the first level pretty quick here on the BSS, definitely downloading this for later, as this is a really relaxing game. Thanks!

I have never heard of these puzzles before, but I found them really fun. The graphics and sounds are also good. However, I have completed all but one level. Level 47 has truly stumped me and I suspect that there may be an error, perhaps from when it was encoded into the game. I cannot be certain that I am not making a mistake, but I have repeatedly ended up in situations likes this. 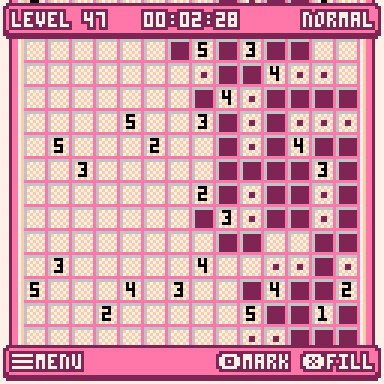 No matter which way I work at it, there always ends up being a 2x2 dark area somewhere in the bottom left. Either one of my rules has lead me astray or there is an error(perhaps a number was written wrong?). I have tried this level more times than any other level and would appreciate a solution if it is possible.

Excellent game!
I enjoyed playing it a lot! Fun puzzles and great implementation

@Shoxidizer That's the level I found a bug in; it genuinely isn't solvable. I thought I'd pushed the fixed version here but I must have forgotten to update the post.

Thank you very much, either way its good now :).