Hey! This is my first Pico-8 game, a clone of the DS game Polarium.

It contains 100 levels. You can get a hint for every level if you're stuck.

There's also a level editor, which lets you create your own custom levels. You can even share levels with other people with 30-digit passwords. These passwords are completely compatible with Polarium, so you can also find lots of levels other people have made online for an extra challenge. 20 custom levels can be stored.

This is pretty cool, I don't really remember the original very well so I can't say how it compares, but it seems well put together, congrats.

Took me a second to figure out what I was doing on level 1. Once I got to level 13, it seemed impossible. Up until that point, the levels were all solvable by making the entire board a single color.

I Googled some Polarium gameplay and watched how horizontal lines were cleared instead of the entire board.

Anyways, it may help to have an early easy/small puzzle that cannot be solved by making the board a single color. Something like:

Which can be solved by a single vertical line.

Anyways, looking at the instructions, I see that they're pretty clear on this point :) I just didn't parse it on my first read through.

Thanks for the suggestions!

The game is pretty close to the original, and most of the levels are from that game too. I'm trying to make some levels of my own, but I wanted to upload the game now and making 100 (or some large number) of good levels takes time, hehe. That would probably mean I should invalidate the save though.

I'll at least swap out one of the early easy levels with one that can't be solved with one color!

I'm not sure if automatically moving the cursor to the next incomplete level will be confusing or not, especially if someone has completed many of the inbetween levels, but I'll think about it.

I'll at least add the level number to the playing screen so you know where you are at all times, and also an indicator saying if it's already completed or not. Some cues like that would probably be nice.

@trevorade Thanks again for the suggestions, I've now implemented all of them in some way. Changelog:

Have you thought about music and sound effects?

Yes, but I've never made sound before. If I put music in it'll be the original's weird electronica I think.

@Chodot: Yes. Here's a pretty big hint, this is how the cleared level looks like (what lines should be black and which should be white): 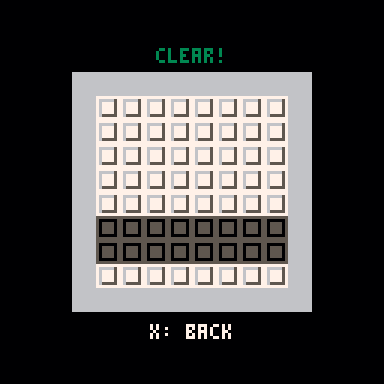 I love Polarium. I completed the GBA version over 4 months a few years ago. Just an amazing game. The GBA version was in development first, then the developer Mitchell Corp took a break to make the DS version as a launch title for that system, afterwards returning to finish off the GBA version. The extra time spent on the GBA version shows as its a much better and more complete game IMHO. And it can be played one handed whilst commuting!

This is a really nice version. Well done!

I have a few thoughts:

@matt Thanks! I love Polarium too. I didn't know that piece of Polarium history! I always wondered why the first game came out for DS, and the sequel came out for the earlier GBA. I always thought it was because of the Game Boy Micro. I've actually been making a Polarium demake for Game Boy for a while, since that seemed the logical next step after GBA! This PICO-8 game was kind of a way to mock up stuff quickly for the Game Boy version.

Edit: Hmm, now that I think about it, I don't have enough cartdata to store whether or not a secondary challenge has been solved unless I shave off the number of custom levels you can save. Currently you can just save 20. That should be fine though, I still have room for 19 (or an even 18 to make the level select pretty).

Maybe now is the time to optimise level data storage? :)

Haha, yeah, I have already done that. I had to do it a while ago to save tokens. I now store them in the same representation as the passwords are generated from. I just haven't put up a new version here yet because it's not polished (although it's playable), but it's here: https://github.com/tobiasvl/picolarium/commit/4ade4725518169c42d5f61c3bb44d25b889a5579

Note that the hard coded levels in that commit are just 9 bytes because they don't have starting and ending squares yet, but custom levels in cartdata do have those, so they're 11 bytes plus a checksum byte.

Buuuut I don't need to actually store the checksum of each custom level in the cartdata, I could just calculate it every time it's needed for a password. That way I could store 19 custom levels sequentially, and then split up the 20th level into separate bytes and spread it over the checksum bytes of the other levels. Or store the levels as 11 bytes each sequentially, of course, but then it's a little harder to store and read them.

Thanks for being my rubber duck ;)

@matt: I decided to use the start and end positions as hints instead of secondary challenges. The levels aren't necessarily made to be solved in more than one (interesting) way anyway. I'll keep it in mind for a possible (GBA-inspired) sequel though!

great game! hope youre still making a GB version, my flash cart is begging for it!

I remember this cart. Superb puzzle ! At the time I didn't give it a star. Let me do so now.

Would like to add a key (X) to back up one step in case you make a mistake and add to menu to reset puzzle entirely instead of (X) as it is now.

Maybe add this above LEVEL SELECT ?

Oh, thanks guys!! As a matter of fact I have an almost-finished update to this cart in the can, I should really finish that one of these days. I'll try to add your suggestion, @dw817.

@Domu: It's been on hiatus a bit since I recently had my second kid, but thanks for the motivation!

Actually,tobiasvl, it looks like you can back-up over your line with the arrow keys so a DELETE move could be done with (X) after all. It would just intelligently choose the opposite direction the player last moved for that position.

No, I am mistaken, I thought there was a bug. It just highlights the completed puzzles. I was working on 5 and thought it was 4.

Wanted to add. CAN ANY image be solved ? That is for instance, if I drew something in the 7x7 field, would there always be a possible solution ?

Also, how do the hints help ? I'm seeing two dots on the dinosaur puzzle I'm working on but not sure how that assists ?

Yeah, it'd be easy to make X go back one step, since I already keep a stack with the path you've drawn so far. The behavior as it is now is basically just copied from Polarium Advance.

And no, there would not always be a possible solution. That's why I make you solve a custom puzzle before saving it, to make sure it can be solved. If you know how the password system works, though, you can create a password that passes the checksum but gives an impossible level. Like this one:

The hints show the starting and ending squares for the solution.

This has got me curious. I'm thinking of making a puzzle called 7FOLD, already got the logo done.

Similar to this but you can draw anything at all in a 7x7 1-bit pixel field, and it guarantees a solution no matter where the pixels are - but it can be tricky to figure out.

No worries! I'd sure like to see the update drop (and congrats on the second child - though the GB community is praying for it's speedy development and independance so we can have our ROM noms :) )

Hello! Having never played the original, I don’t have a hint of how to solve level 4. I see that lines can’t cross, so my idea of flipping a tile twice doesn’t work; the hint doesn’t help me. Maybe figuring this out is part of the game, or having to look online, but I thought I’d say this in case you think you could add more explanation of the rules inside the game.

Edit: solved it by reading the tutorial again! Each horizontal line needs to be one color, not the whole board.