Copy and paste the snippet below into your HTML.
Note: This cartridge's settings do not allow embedded playback. A [Play at lexaloffle] link will be included instead.
It Takes Four to Party 1.2b
by jeb

Copy and paste the snippet below into your HTML.
Note: This cartridge's settings do not allow embedded playback. A [Play at lexaloffle] link will be included instead.
It Takes Four to Party 1.1
by jeb

TL;DR
Dungeon crawler with 28+4 different abilities (let me know which ones you like the most)

Game Description
This is a light-weigh dungeon crawler in which you bring a party of 4 adventures into a maze consisting of 4 levels of 4 rooms, each level ending in a boss fight.

You play as one character at a time but need to switch to the other 3 in order to finish a room. Every time you switch, more monsters spawn. In each room there also spawns an "aspect power" that transforms your current character to a different aspect (and spawns more monsters!). Each aspect gives that character a new ability.

Music Credits
The music is composed by Robby Duguay, source: https://www.lexaloffle.com/bbs/?tid=2619 Big thanks!

Development Notes
This game took me aaaages to make. If I had known it would take this much time I wouldn't have started, heh. There were two main time sinks: trying to figure out the abilities, and banging my head against the token limit. Thanks to the Brynolf brothers for the "unp" method, which saved me countless of tokens and made this game possible.

The game has not my personal intro or a title screen because I'm out of tokens.

Which leads me to...

Mini Rant
The token limit is a really annoying part of pico8 and I wish it would be removed. The compression limit is a much better limiter than both the token limit and the character limit, and that one is hidden in the "info" command. There should be no difference between writing "1,1,1,1" and {1,1,1,1}, but since strings are counted as 1 token it's the only viable way to store that kind of data.
End of rant...

Hope you enjoy the game and please let me know if you manage to beat it.

Wow. Once I got a hang of the mechanics, this was super fun to play! Still working on beating it, but wanted to at least give some feedback.

Edit: Still haven't made it past level 3. Love the different class levels, though.

Yes the difficulty ramps up halfway through level 3. I guess a lot of the gameplay is about figuring out what the different abilities do, since some are very useful and some are not =) Balancing is tricky because I've often defeated bosses without even seeing them on screen.

¤ Teleport may seem like a mediocre ability, but it has saved my skin many times.

The game used to have a "vigor" aspect also, but I ran out of tokens and cut it because it was the least interesting one.

Awesome! Really love the way you can play as different characters and how you level each of them up... Snyggt Jobbat

I did it! I beat it! That last level, though... O_o And look how close my wizard was to dying! I loved all the different abilities. I had definite favorites, and I loved how unique they are. 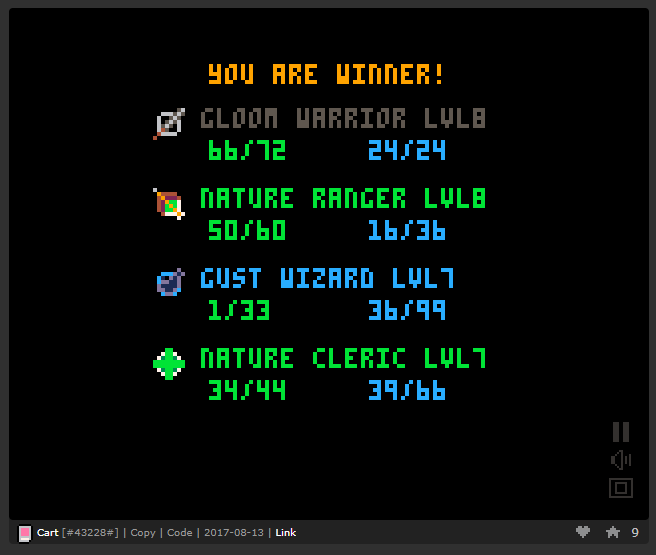 I have a few points of feedback. Feel free to ignore them. :) First, it would be great if there was some kind of sound or visual feedback that you had cleared a wave of monsters. Many times I had to hunt around a room to make sure everything was cleared before deciding to switch characters and spawn the next wave. This would be especially useful since you can kill monsters off-screen.

Second, maybe a circular ping wave pointing to the exit instead of square? Not a big deal, just a thought.

Lastly, have you thought about making it so that when turning the player, they snap onto to a sub-tile grid? This was something that the original NES Legend of Zelda did that was brilliant. You could move in single-pixel increments forward or backward along your current direction of movement, but as soon as you turn, the player would snap onto a 4px sub-tile grid. You don't notice it while playing, because the turn itself is already an abrupt change, and a shove of maybe a couple pixels just isn't noticeable. The upshot, though, is that it allows a player to snap right onto a tile and thus easily walk through 1-tile wide spaces, without having to perfectly nail the turn. The player just feels like they're awesome at nailing those turns and sliding right between those spaces. I only ask because there were lots of times I'd get caught on the edge of a tile if I turned just a pixel too early or late.

But wow, fantastic game. Totally loved it. Super fun, and I plan to play it more just for the variations provided by the different abilities.

Great game! One question - is the concept yours? I don't remember actually playing similar games, but somehow this feels extremely familiar. Maybe it's just my brain playing tricks on me. My favourite class must be the mage since it's easy to quickly kill enemies at a range. Thank you for taking the time to make this game! <3

@MBoffin Ah, excellent feedback, I will give it a try. Miyamoto truly is a game design legend.

I don't know why I made the exit ping a square instead of a circle... Changing it to a circle will save me a few tokens, so it's a win-win.

I will make an update with a few balance changes. I will probably make the bosses last longer as well, or at least nerf "Judgement" somehow.

@Enoshade I will not claim that something is new under the sun, but I can swear that I came up with the concept myself. Obviously inspired by other titles, and by the dungeon crawler genre itself, and in discussion with Daniel Brynolf (thewreck).

The concept was spawned from this thought process:

I started making this game by drawing the character sprites with the blue sky goal of making some kind of "rpg combat game." I was thinking about tower defense or similar at first. I finally decided to simply make something that was more along the lines of Gauntlet.

I wanted the player to use all 4 characters and was considering making it so that the other 3 were AI-controlled or timejump controlled (like in Super Time Force). Obviously the biggest challenge would be to make low-token-cost AI that wasn't too stupid, but even if you made great AI it couldn't be too good either. You don't want the AI players to be so good that you don't need to play the game yourself.

Then the idea struck me to take inspiration from Super Crate Box. The cool thing in SCB is that in order to gain points you are forced to pick up a new weapon, even if you really like the weapon you are currently having. I thought this would work in my game as well, though I must admit it has a different feel than in SCB.

To make the character switching more interesting I also wanted to add the aspect powers. As I mentioned before the goal was to make 8 different powers (including the starting power "Pale"), but because of token limitations I had to drop one of them.

I'm glad to hear you liked the game! Now I'm not sure what to do next in pico-8... I'll just wait for inspiration to strike.

@MBoffin Did the changes... Had to cut the game over "bleed" effect in order to squeeze the movement snapping in place.

Simply not enough tokens to do anything about that "end of wave" indicator you wanted... Needs an if statement that plays the sound effect once and only once, too expensive ;)

Wow, such an awesome game!!! Awesomeness!!!

Jeb, you made me fall in love with this epic console... instantly! Thank you for that :)

this is an amazing game, my favorite class so far is the gloom knight mainly because of its ability. i'll have to agree with you on the difficulty bump on three. still chipping away at that level! (btw, i'm not sure if this is a bug or not but certain ability's like the knights shield can carry over if still in use to another class when swapping classes)

One of the best games on pico, this could be a commercial game. It's just a bit long when you restart and want to go back to the difficult levels :'(

Can i download it and keep a backup on my computer? how?

Heya, @jeb! Was looking at your source and happened to noticed you can save 18 tokens by removing your clamp(v,a,b) function and replacing it with PICO-8's native mid(v,a,b) function. Might be enough for an if statement or two... ;)

I can drop potions, but I can't pick them up. Help.

This game is great! I really like the class-switching monster-spawning mechanic. Ran out of time over my lunch break but will pick it up later to beat it!

I finally got the hang of the mechanic, and it started making sense. I got to the last boss but haven't beat it yet. I decided to make a detailed list of the powers and abilities of every combination. I've also made notes about how I feel about each one. Here's what I got:

Feel free to disagree with my rankings.

This is really impressive. Looking forward to spending more time with this on my TV with a controller!