Hey there! I'm working on a heavily Super Mario Bros. inspired side-scroller that uses procedural generation for its levels. Despite the appearance, it's not going to be entirely Super Mario, however. There's going to be unrelated characters and monsters, and the player character will use a three point health system instead of power-up tiers.


It's far from finished, obviously. The basic level generation is complete, but it lacks enemies and many stuff. Levels cannot be completed yet, and side areas like bonus rooms and the starting and ending areas for underground and underwater levels are not implemented.

If anyone would like to contribute some code, art, or sounds/music, feel free! At this point, the token count currently stands at 1426.

Additionally, at the level start screen, pressing Z and X will adjust the current world and level retrospectively, but that won't be in the final game. You can return to this screen through the pause menu.

Nice game! I can't wait to see how this turns out. Also, the zoom effect works well for this game. I'm assuming you chose it so that you could fit more-whole screen chunks in the map, right?

Yes, that's why the screen is zoomed in. If it weren't, I would've only been able to fit in at least 3 level types for only a dozen screen chunks each (the first two screen chunks of the top row is reserved for the actual playing field).

This is great; I look forward to seeing where you go with it!

Looks neat! I'll keep an eye on this one. Good luck! 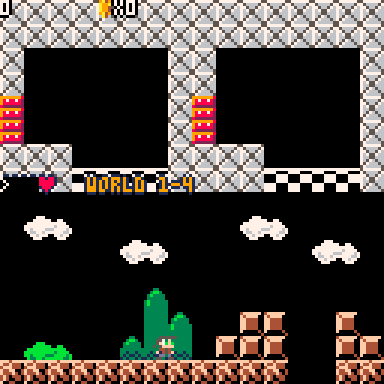 lol, falling through a bottomless pit apparently places you on the map 'below'? That could be an interesting mechanic; having levels inter-connected in some way.

Edit: Hey, I noticed you're saving levels chunks in the map data? This is a good way to test out ideas, but you could try using strings to store the tilemaps instead. You would just need to have it pull the needed chunks and place them into a table (2d array), and then update any mset/mget calls to instead search for offsets inside that map table if that makes sense. And then instead of a map() call, you would have a function that draws a sprite for each tile using the table as the map.

You could store them as tables directly, but loading them from strings is better, since a string only counts as 1 token.

Nice touch with the bushes using the same sprite as clouds ;)

I was thinking about doing a similar kind of thing... but just a little 4-level jaunt that scripts different obstacles/widgets each playthrough. Generally, levels 1 and 2 power you up, 3 and 4 whittle you down... then you can quit or take on another lap with different obstructions. Trick is, getting all the gameplay objects within two pages of sprites; since I plan to use the full map.

This is right up the alleyway of projects I'm working on, which include MegaMan and Metroid-inspired proc-gen stuff, too.

I just found this... any progress here?

I have started something similar:

For my project, I have been busy with other things over in other communities quite recently, so I haven't made much progress with this ever since, I'm afraid.

That does look super neat, however. I wish you luck on it!

That DOES look excellent, Sascha217!! Keep me posted, too!

Good game but why is there no level ending and why is the camera zoomed in?