I discovered PICO-8 four days ago after reading a news in The Verge about the upcoming PocketCHIP. I purchased a license (the voxatron bundle) to see what it was about and since I can't stop playing with and the numerous games / demos.

I looked at some code, read some posts on the forum and thought it could be even more funny to code.

So I decided to start with a Lode Runner remake as my first program.
It might be a bit ambitious as it's been almost 15 years I haven't coded anything serious but I have some time and I'm decided to learn.

It's still at the very early stages, I managed to fit the first level into to 128x128 and draw the sprites set : 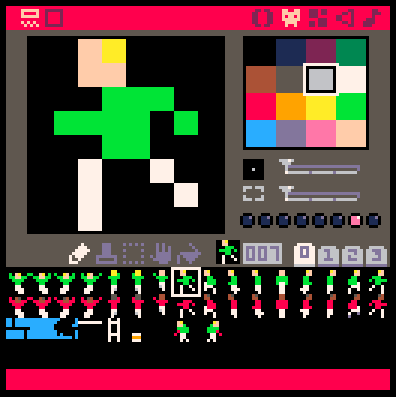 and I can display them together : 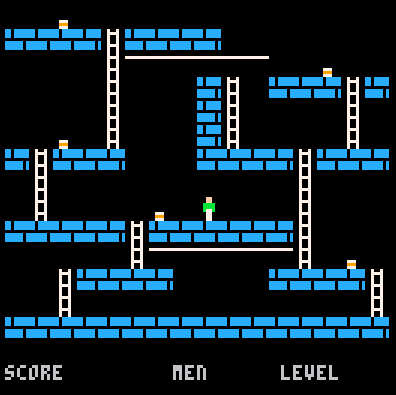 Today, after a long weekend, I'm back to PICO-8 devellopement.
Lode Runner runs !

I had some trouble with transparency - looks like sprite 0 has to be blank (?) - not sure how flip() really works ... there must be a better way to refresh the screen than :

Moving my main sprite has been a source of satisfaction. I still need to sync the speed but it already looks nice to me.

The most difficult has been with the colision detection. It works but I'm not happy with my code.
the actor's states are far more complex than I initially thought
I should have think a bit more before diving into the code and now I think it would be better to restart from scracth before going too far.

Looks really nice and I loved this game when I was a kid!
Hit me up if you want want assistance :P

Thanks guys for the comments.

instead of using rectfill to clear the screen, use cls()

wonderful!! I love lode runner so much! <3

Aw yisss! That's one sexy gif. I want to play this!

I think I have enough code to share now - So here is my humble contribution :

I'm now looking for how I can hide the gold after running over it - ie replace the cell in the map by an empty one - same for the bricks which I need to temporary replace by sprite #34 when digging them with z/x ... any idea would be welcome.

I like lode runner very much. It was one of my first game on PC (around 1986).
This version looks very good!

hey Saccharine! This is looking sweet! =)

To remove objects, you can either use mset(x,y,0) to get rid of the object. Or when you load the map you can find all the treasure and make them "objects" instead (replace with 0 in the map) and draw them as sprites each frame on top of the map and remove the object when it is picked up.

For the digging you'd use mset(x,y,34) as well, to replace it, but you probably want to keep a list of timers that restore the block when it returns after it is dug.

Thank you impbox - exactly what I need :-)

It's been a long time I haven't played with PICO-8, busy with other tasks. I thought it would be good to give some update of my little progresses.

The guards are not managed yet, nor digging.

The code is not commented, but I tried to use self explanatory variables names, and it should be easy to read.

I think you don't need much advice.

One small problem, you can still move when "digging" button is pressed.

Also, I don't think you're going to run out of sprite space, but you can shave off some of your left and right facing sprites by using the horizontal flip flag on the spr() function.

Hi HotSoup - yes and I'm already doing it in version .5 - Thanks

@matt - thanks, I didn't noticed - another challenge added to the TODO list

Looking great, can't wait till the digging is working =)

One thing I noticed, when you walk right off a ledge you fall slightly left of where you should. Need to lock it to the grid.

yep ! I read a good paper on this matter a couple of days ago and realized I need to extend the character mouvement so its always stopping at the center of a tile and 'ready' to dig the left or right, climb, etc.. : http://higherorderfun.com/blog/2012/05/20/the-guide-to-implementing-2d-platformers/

I love the original game, so good luck! \o/

This looks fantastic! Can't wait to see it evolve. It's inspiring me to make my own game.

Will it be X and O buttons to dig left or right? Or will it be x+arrows? (If it were only X then O could be used for ITEMS)

You could simply snap the character to the grid (or half grid) with the dig button by player.x=/4 (or 8).

I like where this is going, too. One of my down-the-road-a-long-ways project was kind of like a world-roaming version of this with some other factors. Kind of like LR meets Terraria? If I can make that work. I have a lot of dev learning to go before I get to that point, though.

Saccharine, really nice job on the tiles. Are you ok if I use some of your artwork for my Lode Runner version?