There are a few handy editor features though; here's a demo of setting animation loops: press l to start and end, and then -,+ or q,w or a,z (for azerty keyboards) to switch frames. This also works at different sprite selection sizes (shift-click and drag a selection from the spritesheet). This gif also shows using ctrl-b to "paste big" multiple times.

Oooh! so looking forward to the looping!
Great thing to come home to (and also is that problem fixed? will have to see if it comes up again or not :o )

thanks for the bugfixes! 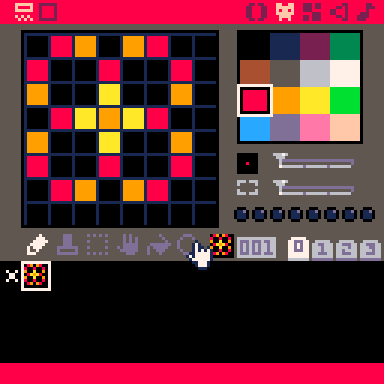 Still hoping for optionally appearing GRID in Sprite editor at some point, @zep. :)

@zep, Does the Dotty text mode change mean we have to re-upload updated cart or you already fixed them automatically? I used it both in Klax and rtype. Anyway, great release once again.

I think it means that when using the font control code for dotty, the result will look different. The note mentions klax, which I suppose means that it looks good for it?

@merwok Actually those cart ids do mean "broken by change"! I grepped through everything and only found 3 carts that use this feature, so I decided to stick with the new glyph command.

@TheRoboZ Sorry I keep breaking your carts -- thanks for using the cutting edge features! I did a stealth patch to #klax just now -- the live version is now klax-2 with the "\^."'s removed and uses "\^=" instead. rtype-2 should not be affected by this as it uses the pinball command ("\^p") which still works as-is.

@SmellyFishstiks: Not sure yet, but I've made some thread safety improvements 0.2.4b -- see: https://www.lexaloffle.com/bbs/?tid=44529

There are already Windows, Linux, Raspberry PI, and for some reason I can't use them.
Is it possible to develop an
Android platform.

No, phone apps are harder to make than regular programs, so they are planned on the roadmap for version 1.0 only. We may also get a web-based version that works in browser without installing anything!

> for some reason I can't use them

Can you make a thread to help you there (or come on the discord server)?
I run pico8 on debian and raspberry pi, I can help.

@merwok
Thank you, my English is not very good, where is the disharmony server. How do I enter? For me, pico8 is enough