It's been years since I posted anything here, but I just wanted to share something with you.

I've found a game on steam that is also inspired on Robotron and voxel-based terrain and it immediatly reminded me of Voxatron!:

It looks cool, and I though about sharing it with you and ask your opinion on it. It could even provide some ideas for projects of yours.

If posting about other games is against the rules or something (haven't been following this forum at all), feel free to delete this post on the spot! No offense taken, and my apologies :)

Kudos to you, and good luck!

Hello, everyone!
It has been a while since last time I checked how Voxatron was progressing, and today I happned to try to come check the latest version, but I cannot access the My Games page on the site...

Did anything change while since last time I was here? Is the website account and the Games account two different and independet things now? What can I do?

I am in the middle of the development of a rather large project. I am trying to recreate the island from Zelda: Link's Awakening. However, I'm having a bit of a hard time due to some limitations.

P.S: Of course, I don't know anything of programming or about the inner workings of voxatron, so excuse me if this suggestions seem too demanding. Well, I can dream... xD

Thanks for the excellent job so far, zep! :)

It came to my mind how cool would it be to having statues of enemies that would come to life when we came close enough. I don't know if anything similar has been done before but I went to try it myself, as you can see in this test level.

It doesn't look too bad, but the animation has not many frames, since that would require much more work. Also the animation itself is complex to set up on the room as it is, let alone with more frames. Still, this serves to show it is possible, and I believe we will certainly have options in future versions to make stuff like this with a simple process.

note: also, to make the frames/props appear instantly, put 2 in the "instant" box. Thanks for the tip, Zep :)

Hello everyone!
I'm currently working on an animation that triggers upon reaching close, and that then transforms into an enemy. In order to to that I needed however to make the prop disappear before spawning the enemy in its place...
So far I've been able to use the negative voxels to make the prop disappear, but the problem is that the negative voxels themselves have that "spawing animaton" like every other prop, so intead of the prop disappear instantaneously, it erases just the bottom half, and then the top half falls to the groung due to lack of support.

So, in short, what I mean is: is there any way to get rid of the "spawning animation" of props? I tried putting values on that "instant" box, but that doesn't seem to do the trick. 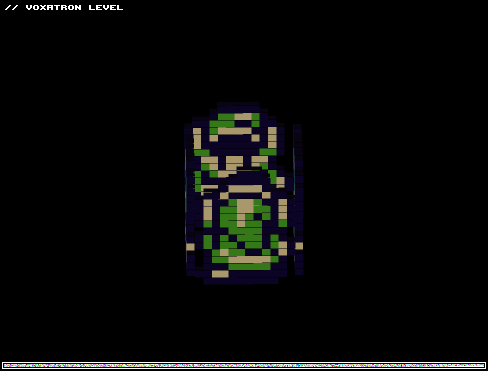 Hello, once again everyone! You may have seen my previous model of Link from Minish Cap.
Now I have tried to make Link of the GBC version!

I was trying to make it look like in the game the best I could. So instead of trying to go 3D immediatly - which ends up looking different -, I tried to put its 2D sprites together, and was playing around to see what looked best and experiment... 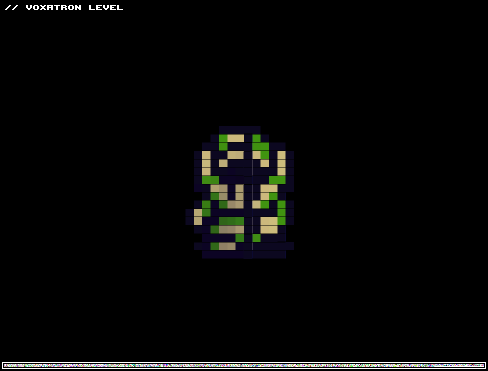 ... so I ended "joining" the sprites together, so it would look better and more compact. Of course, this means the character willl always have 1 or 2 black lines over it the entire time... But still looks very cool!

I ended up making it in actual 3D ! However, as you may see, the model that looks great in the editor, actually doesn't look so good when you play it (because of the game forced camera perspective) and I suck at building in perspectives... so yeah.

In this one I actually made his sword too, and added a funny sequence I'm sure you'll find amusing (specially if you get the reference xD)

Hi, everyone! You might have seen my post earlier today, with a model of Link from LoZ the minish cap...
Well, I just spent a few more hours making it into a Fully Playable character! AWW YEAH! xD

I tried my best at making a bow animation for the shooting, and sword animation that looks fluid. I'm actually very surprised at how cool it looks, considering I've never made anything like this before!
Enjoy and feel free to use it in adventure maps ^_^

Hi, everyone! I just spent the past couple of hours trying to make a model of Link from LoZ the minish cap. Sorry if the proportions aren't 100% correct, but it was the very first time I used the Voxatron editor, and I had never before designed anything similar, but I believe it still turned out really good, so I decided to share with everyone :)

Tell me what you think of it! :D

UPDATE:
I removed the old versions on this post, so they no longer show on the BBS list.
I ended up making it into a fully playable character! Check: PLAY AS LINK!! - Zelda: The Minish Cap