v3.01 - Fixed an issue with best times not being carried between games, added cartdata functionality to save best times between sessions.
v3.0 - It's four years later and I'm still fiddling around with this: Added a tutorial to explain how the hell scoring works; a sprite outline effect to make objects stand out better; particle effects because particle effects. This was all made possible by streamlining much of the code, no more tables as containers for variables. Probably some other changes I forgot about.
v2.1 - After some great feedback (thanks @jeb!) I've made some changes I was kicking myself for not thinking of.
•Added a walking animation for the monkey
•Added a third difficulty, so now there's Easy - 125pts per level, Normal - 250pts and Hard - 500pts. You can easily get through easy (pun intended) in under fifteen minutes.
•Made a bunch of minor adjustments to map layouts, there shouldn't be such a big difficulty spike in the mid-game now.
•Fruit should no longer appear directly adjacent to or on top of the monkey. Less broken streaks! 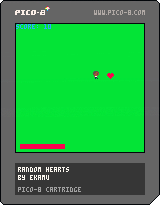 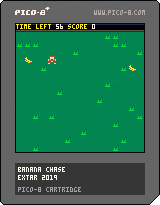 i played normal difficulty,
then i played hard difficulty

@Sosasees that should be fixed now in 3.01. The game now uses cartdata to save best times between sessions. :)

@extar both playthroughs were from the same session, but thanks 🙂

Short but fun! Thanks for sharing.