I made a new version of Painto-8 that is easier to use and can change the palette during gameplay. I'm keeping the old version here in case someone still likes to use this one. 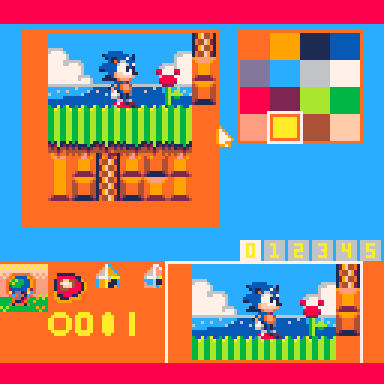 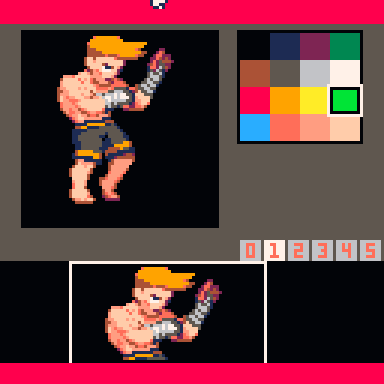 I recently discovered the 16 extra colors, and since it's not very fun to go back and forth between sprites/code/game just to test colors, I made this cart so you can actually draw sprites with the extra colors directly!

you discovered the WHAT

Pretty neat work you did here. Not so sure I like the new palette discovery. There is no solid BLACK in it.

Also, this discovery may be a quirk that ZEP may remove in favor of something else in the future.

@dw817 You don't need to use the entire new palette all at once though, so you can just use the solid black from the base palette.

I would think it might be removed too except that zep's been tweeting and retweeting stuff about it.

Zep mentioned in his NYU talk that there are still undiscovered secrets in Pico8, so maybe this is one of them. 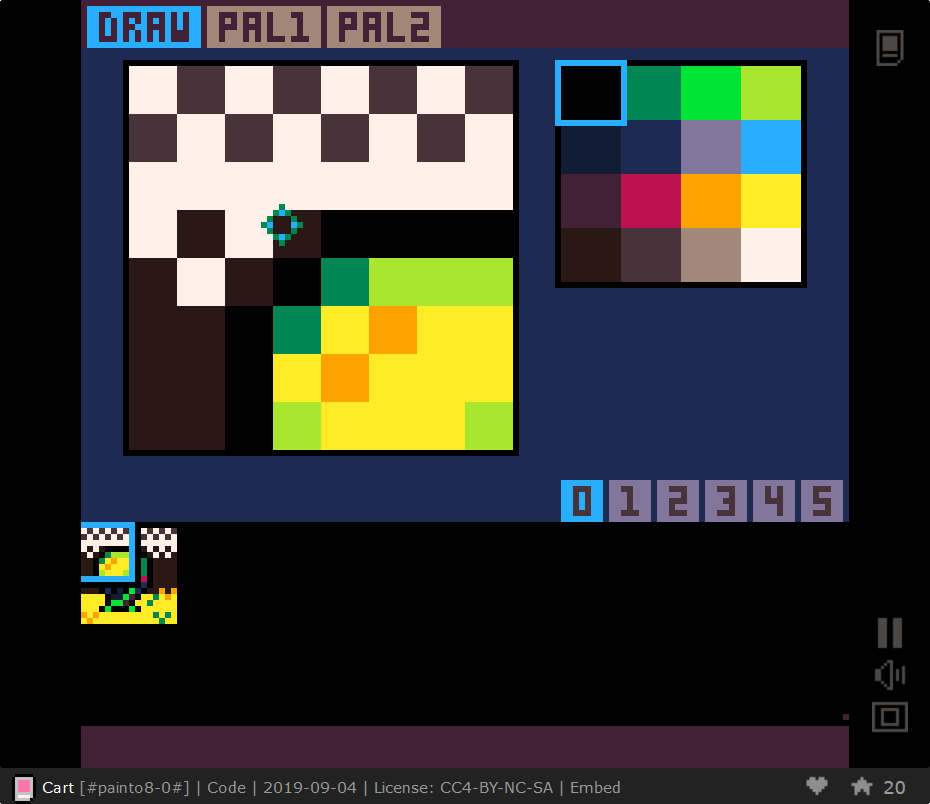 Got a nice little color set going on here ...

Super cool! Sometimes I'm like, 'Man if I could only just get rid of this one color and bring in one more shade of this other'...now I can! And it doesn't feel like a total destruction of the concept of Pico8 to me either...

The interface for setting up the palette was a little confusing at first, but it did quickly become understandable after smashing the mouse on it for a few minutes.

@pdiddles03 Yeah, it's weird. I have a mouse-only game that used to work on mobile, but stopped working when a more recent version of pico-8 came out...

@hseiken There's not much I can do to improve the palette interface, since you can only have 16 colors at a time... The best way to avoid getting too confused, I feel, is doing like shown in the gif: select the color in the draw tab, go to the palette tab to switch the color and go back to the draw tab.

I have a few more stuff I want to add to the cart at some point, so if anyone has a better solution, feel free to suggest it!

One way to tackle it, it's not necessary to actually show the 'true color' of the palette, but if you notice, the secret palette is like a 'dark version' of the main one, so you could repeat the original palette with (DARK) or (D) next to it and when the color is selected by the user and made active, it becomes visible and shown for real.

It's mostly the tabs thing that is confusing at first and the 'OK' and the symbols on the mini palette. It's not that it doesn't work, it's that it's disorienting initially. Having a single page would help and I think simply just putting (D) indicator next/on colors from the secret palette if they're not being used would work.

If I get to time to hack/edit this idea into this cart and it doesn't 'feel'/look to terrible I'll pass it off for your review/improvement/approval/rejection.

Thanks again for making this in the first place!

EDIT: ALternatively, remove the palette tabs altogether by making the interface as such:

Hover over palette slot, use scroll wheel to cycle through all 32 colors. This also makes it especially useful for changing colors and seeing how it affects the image as well. Yes, I think this would be simple and quicker to work with.

New version of Painto-8 here: https://www.lexaloffle.com/bbs/?pid=82916
(The new version is a piece of code you paste in the cart of your choice, making it easier to use. You can also edit the palette during gameplay)