Explore planets and collect 12 alien eggs before Burke can get to them.

Sound and headphones are recommended for the best experience 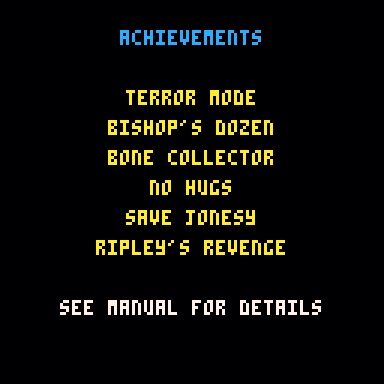 What people are saying...

"I nearly jumped outta my seat when it chased me..." - @Liquidream

"Yeah, headphones are a must" - @enargy

"Hats off to you for bringing that element into your games. Brilliant." - @beetleinthebox

"The game is cool!" - @pineconegraphic

"You’ve found a really nice style in this one." - @johanpeitz

"Are you still making that damn game?" - @barneysangels

This game has been a long time coming. I started it back in June and worked on it for about a month. Then I hit a wall and got distracted by other stuff...it sat on the shelf. I came back to it after a couple months and finally finished it up. Very happy I did.

The idea got seeded when I read an article in Retro Gamer about the Sega SG-1000 and the game "Girl's Garden". In it you're a girl that has to collect flowers while avoiding bears to keep her boyfriend happy. Somehow that got me thinking about applying that model to an Aliens motif...and I had just so happened to find a spritesheet rip of Rebelstar from the ZX Spectrum that had alien characters in it. I took those and started designing around that.

Prior to this, most of my Pico-8 games have been arcade shooters, so making a maze/map game was new to me (especially one with a story). It was nice to try something different and I learned a lot. I'm not sure I'll try to make another one...while rewarding, this experience was exhausting. I'll just have to spread out my efforts when it comes to this genre.

What I think made the most difference with this game was that I came back to it after some time away. It felt good coming back to something that was a) half done and b) still familiar enough code to dive back into without a lot of re-learning. Plus I could look at it with fresh eyes to determine if it was worth finishing. It held up well and I was motivated to get it done.

But man...the last 10% of development is killer. For one, I hadn't quite figured out the last act and then when I did, Pico-8 compression limits came around and tried to crush my dreams. To combat that, I simply started over...kinda. I opened a blank cart and copied over code chunks one-by-one, inspecting and refactoring each one as I went. I had to trim some design fat but in the end that had little impact on the gameplay and that's what matters. All that effort paid off and I got in under the limits with a solid game.

Since this game has an actual ending, I kept playing and I kept failing to win. Usually that's a sign of the balance being off but this time it was just a good solid challenge. By design or by luck, the game trade-offs worked out wonderfully. The game isn't easy but not too difficult. It never feels overly unfair and has some wonderful emotional impact as well. Even with insider knowledge, it took me quite a while to win but only after plenty of "just one more time" moments.

Thanks to everyone that helped along the way, whether on Twitter on here in the forum...all of it made a difference.

Please report any crashes you experience.

If you have any questions about how this game was made or what was used, please don't hesitate to ask.

Great stuff - was able to get MUCH further with the tweaks you made.
Then I stupidly died coz I got confused between the Map/Fire keys! D'Oh!

I especially love the manual, looks great and explains everything so well.
(Also - yay, I'm in it! :D )
May have to do one of those someday!

Congrats of finishing it - I'm sure it'll be very popular! :D

@Liquidream - Thanks for all the help. Your feedback went a long way. I'm glad I finished it too! I'm one that starts many things but finishes very few. I'm proud of the game and hope everyone has fun with it.

On the dev side of things, I'd love to learn how to be more efficient with my tiles for games like this. One reason I ran into trouble was I have a giant array with all the wall tiles (bushes) and drawing them, rather than using a map.

I didn't use a map because I wanted a large-ish quantity of layouts to choose from when generating the level. I mean, it clearly works but I'm sure there's a better way to get the same result that won't max out memory.

Great work on this! Excited to check this out on a big screen -- I'll let you know how it plays on rpi.

Very cool that you were inspired by Girl's Garden. FYI if you haven't tried it yet, it's one of the handful of SG-1000 games that are worth playing (outside of just historical interest/curiosity).

I think I said this before, but I really like that you did a manual.

P.s. Thanks for the shoutout!

Adjusted the normal mode balance a bit. All time limits tweaked in favor of the player, as well as only needing 12 eggs to finish instead of 20. This will hopefully make for a quicker payoff for new players.

@morningtoast: I like the update! This game has a pretty harsh penalty for failure (1 hit --> complete restart) so lowering the requirements makes that sting less without being too easy.

This was a case of being too close to the project for too long. I picked 20 to start because it was a nice round number...as I made/played, it seemed okay. But once it was brought up that the grind was well...a grind...made me think about how much the average/newish person will be playing before they get a payoff.

Collecting 12 eggs is more obtainable for sure, and much quicker at that. You'll still be doing quite a few playthroughs before you get to the end, it's still a tricky run to get there.

Now I just wish the reward was a little more spectacular. Since I was up against limits, I really skimped on the victory scene.

As far as the 1-hit kill...that ain't changing :) That game doesn't that long to run through.

Ignore this. Why does this thread now appear way down in the list? Weird.

Hmmm...that fixed it. I deleted a post I made a few rows up and it reset the date on the thread so it sunk off the page. Small forum bug, me thinks.

I didn't get very far my first few tries. I think that I will be playing this on a saturday morning for sure!! So fun. Very good old school feel. As always great games Morningtoast. An inspiration for sure.

@Rahrahrah - Thanks, glad you enjoyed and will give it another shot. It's not an easy game...but not crazy hard either. After a few die-n-tries, you'll be golden.

Some times, the map generator will wall off a corner with bushes. This isn't so bad during the egg hunting levels since the player can just get more eggs the next level. It is bad if one of the bombs for the last level is there, leading to a no-win game.

Good catch, thanks. I'll run through the map layouts again and try to make sure there's a hole.

I knew this was a possibility but seemed to rarely happen so I didn't spend the tokens to check each placement.

I'm not solutioning the maps at all because it's not really a maze. My solution instead was to just make sure each screen had enough holes to always allow a way out.

I don't have much to say about this game. It looks very good (zx vibes), it's pleasant, well designed, thanks, I like it much!

An egg hatched right when I was picking it up! You get some nice tense moments in this game so good job on getting the atmosphere right.

One thing I would improve is the collision with wall tiles as you can get stuck on them easily but I understand that it is trying to emulate the feel of old ZX games so I'll let you off ;)

Well...I wasn't trying to emulate the ZX with anything more than the art style. The collision issue isn't something I planned (or even wanted) but couldn't figure out how to resolve it.

I reduced the collision box for walls several times over development to a point where I was okay with it. Can you still get caught? Yes, but it's not so bad to ruin the whole thing...and after a few times, you can account for it better (which is like old retro games, I suppose).

I'd love for it to just slow the player down when they clip a wall corner or or something...just didn't have the brain power to figure that out. It's probably something obvious that I just didn't see mid-stream.

Maybe using circles for collision detection instead of squares would help? Hmmmm...but that math might choke things...now you have me thinking again :)

I usually run into that problem when doing collisions.

EDIT:
I believe it may be this bit in your code:

I think what's happening is it's checking for a collision, and if there is, the players velocity is not added to their position. Don't feel that you need to re-write you game now but I hope this helps!

Yeah...I know exactly why it's happening, and it's just like you found. If path is blocked, player stops. There is no velocity for the player as-is, which I guess could be part of the solution.

I'll see what I can redo when I get there. I'm working on squashing some other bugs and adding a few new things right now.

This should be it for a while. I'm happy I got in the last few features I hadn't initially. It took a lot of refactoring and renaming of variables to get everything under the limits, but it's all there. Please report any bugs you may find. I'm only going to squash major issues at this point. I need a break!

Thanks for playing. And remember, the mostly come at night...mostly...

Found one more big bug in alien chase routines. Also added an achievement for finishing the game in Terror Mode.

I really like this game. Solid aesthetics, perfect sound fx, and palpable tension as one explores the jungle. Heads above the fold.

Thanks, glad you're having fun with it. And hope you try to unlock all the achievements while you do :)

Updated to 1.5 which includes some more fixes, most notably a bug where when collecting an opening egg the facehugger would still spawn. Also fixed minor achievement display bug.

Hi, i feel a little bit stupid to ask that but ... i can't start the game, the carts boot up normaly but it's stuck on a credits screen ??? (on pc and browser)

Ran into a runtime error though. Can't say what exactly caused it, although I think I was at the far left side of a level and was running for my life when it just crashed.

Hey, i have some trouble to play your game.
Each time a lunch it it stil stuck on the first screen off credits with the music on ... but when i put _update in 30 fps everything is okay ??? Maybe my computer is to old for all of this glorious 60 fps.