Anyone can climb the mountain!

EX.ULT VIDEOTAINMENT presents a mod of the Pico-8 version of Celeste Classic that replaces Madeline with everybody’s favorite hungry pink blob! Instead of dashing and wall-jumping, you’ll run, flap, float, and inhale your way up the mountain. A spring breeze is blowing flower petals across the slopes. Collect optional Maximum Tomatoes, just for fun. We made minimal edits to Celeste’s level designs to allow for 100% completion.

If you’ve played Celeste, you know that part of its story is about overcoming anxiety and realizing that anybody, with enough determination and the right tools, can climb the mountain. (If you haven't played Celeste, go buy it!) The scene with the feather and the breathing exercise is so memorable! Madeline’s journey to work with herself, rather than against herself, has meant a lot to us. The generous Assist Mode shows us there's no wrong way to make it, and that it's cool to play games in whatever way you like.

This mod asks and answers the question: what if a friendly pink balloon with shoes climbed Celeste Mountain?

This is an idea that started as a joke during Episode 46 of You’re Too Show, a podcast where we look for depth and hilarity in kids' media. We’ve been talking about Kirby: Right Back At Ya! and were struck by a scene in which Kirby falls asleep while fighting. Metaknight says that Kirby’s freedom from anxiety is his greatest strength. We were like, “Whoa! That reminds me of the feather scene in Celeste. Wouldn’t it be funny if…?” And then we realized it was actually a cute and thematic idea, and put it together over a few weeks as a side project.

Follow EX.ULT VIDEOTAINMENT on Itch at http://exult.itch.io or on Twitter @EXULTgames to see more cute game things we’re working on!

Special thanks to:
Caleb Zane Huett for help with the concept and play testing.
Lucy Ralston and Tony Ransom for feedback and code help.
All our friends in C.A.F.E. for encouragement and feedback.
The Celeste team for making such a great game. Go buy Celeste! https://mattmakesgames.itch.io/celeste
HAL Labs for all the joy they’ve brought into our lives over the years.

I love everything about this.

I think that that's an interesting way to have thought of it, as anxiety and similar problems are the main feelings that brought Madeline to Celeste Mountain, and bringing a character who doesn't really worry about much, exempt for the weight of saving his home planet on whatever serves as his shoulders, if he even has them, was put in a similar setting as the Celeste Mountain, the main protagonist had no pressure to go to the mountain? What could be revealed about his possible inner turmoil? (If he has any...)

Also, the idea of a light and floaty character in Celeste mountain, (either interpretation) would contradict the difficulty, but may, in fact make some sections harder. An overall cool idea, and kind of funny.

how to play it. or is it still a wip?

Wow, that's the best mod I've seen period, to be honest I've never been big into the whole mod concept, but wow this is incredible! Keep up the great work

Rating:8/10
Review:pretty fun. not too much differences in terms of gameplay, but cute and easy to play. Nice job!

lol I was JUST told I hadn't attached a cart png to this post!!!!! Well, now I have! Sorry, everybody! 😅

I played it! the music makes me soo happy, more than the amazing moveset and visuals, gg dude

I don't think this time is too bad.

@KoboldKing YOU SPEEDRUN MY BOI 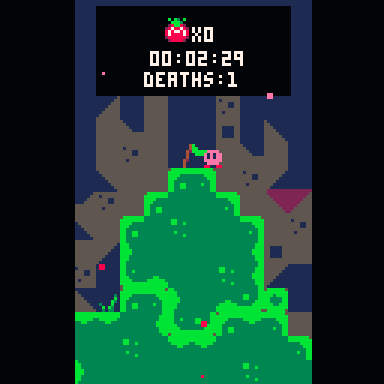 @Drazeros_XTRA what does that mean

@KoboldKing to complete a game quickly