Take on the role of humanitarian rebel Jehanne Butler in an all-out war against the intelligent machines that seek to mold and ennslave their organic creators! Armed only with a slow-charging Holtzman shield/displacement belt, use your wits to pit the robots against one another and defeat the machine-mind scourge!

This is the third game in my Dune series (see also Shai Hulud and Thopter Escape); at its heart it's a clone of the classic game Robots, with a few tweaks to lend this more of a narrative progression and give it a beatable end-game goal instead of just Play Till You Die.

I was inspired to get to work on this by wstephenson's mechanically similar old-game-remake cart, Rhino, which is a nice piece of work that you should go play as well.

Because Robots is such a simple game at heart, I had meant for this one to be a really quick hack job (and the code structure unfortunately reveals that), but I ended up doing a lot of fiddling and polish on it over the last few days and am happy I did because it's a more complete game than I expected.

I had a lot of fun doing both the art and the music for this. For the art, I went with a multi-scale setup to grow the scale of the game from world to world, starting with big 12*12 sprites to clearly convey both the robots and Jehanne on small boards before moving to successively smaller sprites with vanishing details but larger boards with more robots.

For the music, I ditched the Lynch film soundtrack this time and wrote a bunch of my own stuff; there's four distinct level music compositions, each in three parts, of which you hear one, two, and then all three parts on levels X-1, X-2, and X-3 for each world, as well as a little title theme synced to the title animation and a nice ending theme if you manage to beat the game.

Butlerian Jihad manages somehow to be even less canonical than the last two games; the actual lore from Frank Herbert's novels and from the fantastic Dune Encyclopedia is a lot more interesting and complicated than "literally go fight with robots". Jehanne is a really potent character, the unwilling, pacifist tactician leader of a revolt who in her untimely death both catalyzed and unleashed the violence of a galaxy-wide razing she herself had worked hard to keep within reason and control. The story of the Butlerian Jihad is less about the threat of machines than it is about the threat humanity poses to itself when violent ideology becomes militarized and stripped of restraint.

But I gather that the drecky Brian Herbert prequel stuff threw all of that out in favor of this dumb FIGHT THE ROBOTS schtick, so maybe that's what happened with the licensing on this one, in the alternate universe where these games got made.

One note: while the game is not really fair in a design sense (bad luck with robot layout, player placement, and/or teleportation locations can kill you even if you are playing well), there is a lot of basic tactical decision-making that will improve your odds. I beat the game probably 50% of the time as it's currently balanced; with some practice and patience you should be able to get to the win screen without too much cursing of the RNG.

Additional fun fact for postrity: a significant chunk of this gam was writtn on a kyboard with a brokn '' ky, around which damag I mostly routd by copying and pasting th missing lttr whn ncssary, bcaus I am a stubborn mothrfuckr. On a rlatd not, nithr th sarch fild in th PICO 8 txt ditor, nor th PICO 8 command lin prompt, apparas to accpt pasting as input, which prsntd (rspctivly) th nd for crativ choic of sarch trms, and th total inability to proprly "sav" a gam undr a nw fil nam.

I love the ratcheting-up effect of the zooming out and additive music.

In world 3 it's a little hard to see the robot trash piles and selection marquee.

I kinda wish if two robots tried to kill you at the same time they got stunned for a turn, or something. I'm not sure how that would change the game, but it's just a thought that occurred while playing.. "How come they don't smash into each other when they try to occupy the same space that kills me?"

Damn, I bet you loved the shorthand IFs!

I kinda wish if two robots tried to kill you at the same time they got stunned for a turn, or something. I'm not sure how that would change the game

It'd make it an awful lot easier to survive, mostly. A lot of situations that are otherwise deadly involve multiple robots converging on a point, so making that a problem for robots but not for you would create a tremendous amount of bonus tactical advantage for the player.

As is, one thing that's often useful in play is moving toward a near-ish pair of converging bots so that you can immediately use their new junkpile mess for cover.

Thematically, think of it as a justifiable suicide mission for the bots. If they lose a couple chassis but take out the target, that's okay with them.

Wow! This turned out really well.

I KILLED ALL THE ROBOTS

and screwed over everyone else in the name of my crazy anti-machine beliefs.

The way to win seems to be to almost never use shields because you need those debris piles to appear and having at least one shield makes teleporting safe. I got to Carthagos with like 10 shields and that got me through to the ending.

Oh man, accidental bump I guess. Was just uploading a new copy because in the time between the original upload and now I think zep fixed a parsing bug that was originally letting me get away with a mismatched extra close paren in a statement, was crashing to shell with the current player.

There's also some sort of "robot might survive debris" bug now, it seems like; miiight have been there before, might instead be another "my bad code used to get away with it" thing, I dunno.

And christ, I forgot I wrote most of this game without a working e key. Why am I surprised to find bugs?

Ha, I played this robots-type game as a type-in program on a friend's Ti-99 4/a or Commodore 64, I forget which. By like level 4 a green alien guy would travel throughout the level in a diagonal pattern and if you caught him you'd get an extra teleport or something.

Wow this is addicting! Crazy to beat it and then to keep on playing it too. Funny how the theme is very dark, yet the music keeps on getting more flippant as you go along :)

I've hit the occasional bug where robots pass through a dead one unharmed though, but it's not real often/much of a problem.

i think i saw a robot become debris while not colliding with any other robots or debris, but my brain could have been acting stupid

i somehow completed it 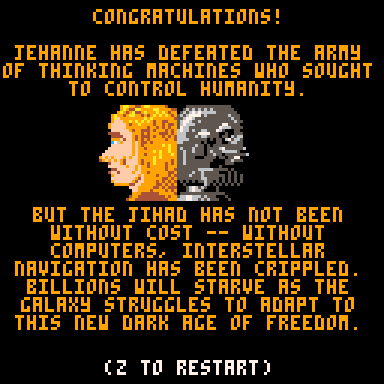