It’s a nonogram/picross-like game where you fill a dungeon map according to the numbered clues and the monsters and chests’ positions.

I really liked the game and wanted to play it on-the-go so I made a PICO-8 version.
All the puzzles in this version were generated by ShadowCluster from the Zachtronics unofficial Discord.

If you’re unfamiliar with the game, there a small tutorial to explain the rules.

As I have no clue about music theory I thought it will be better to spare your ears, but maybe I will add some melodies later.

🅾️ to place a gem, it’s helpful to mark squares you know are empty.

❎ to place a wall, place all the walls in their correct locations to finish the puzzle.

load a new puzzle anytime by using the pause menu.

Levels are ordered in an ascending (somewhat subjective) difficulty order.

If you enjoy the game, you will enjoy the (much better) Last Call BBS’s version featuring thousands of puzzles, better graphics and a awesome soundtrack by Matthew S Burns

Hi!
We played your game at a party with a pico8 arcade-and it was fun!
But it seemed that some levels did not follow the logic presented in the tutorial. For example sometimes the chest rooms can't be 3x3, which was confusing.

@taxicomics
> For example sometimes the chest rooms can't be 3x3, which was confusing.

Do you have a level № in mind ? I will investigate.

EDIT : I've checked all of them and didn't found anything like that, so I think it may be because of my phrasing of the rules, here some clarification : chests are alone in a 3*3 room, but they don't have to be in the middle of it.

Aaaah perfect,now i understand. Thank you for taking the time. Maybe clarify it ingame. But other than that-great game!

OK I completed the level I think, @choo-t. 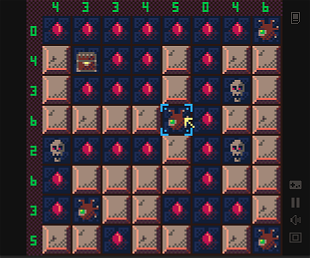 No message appeared after this though. Where do I go from here ?

@dw817
That's not a valid solution, you're missing both of these rules from the tutorial :

You can check this gif from the cart's description for an example of valid solution :

I was really puzzled with this game at first but finally I could figure out how to play this game, or I should say how to solve the puzzles.
I've completed 8 puzzles and will go for next ones. (still long way to go though)

This is wonderful! I was completely addicted to the version on Last Call.

I think the game wound benefit from a check if you are holding a mouse button, i.e. toggle wall when clicking on a space but when you hold left click it should only place walls when moving cursor to a new space. Right now, if you hold LMB and just keep moving your mouse between 2-3 spaces it keeps toggling walls on and off.

Phew! after couple tries and days, I finally able to complete all levels EXCEPT 71. No matter what I do I kept making mistake.
I don't know if the level is not solvable or it's just me not finding correct solution yet.

@Bloodbane level 71 is solveable. Its difficult to give tips without giving the complete solutuion, but a couple of clues are:

I know I know, I've just refreshed my mind and changed my initial assumptions and solved it :)
Thanks for the clues anyways :D.