Hey everyone, just wanted to announce that TweetTweetJam 5 is starting very soon.

If you haven't entered before, the rules are simple: make a cart in 560 characters of code or less! No assets are allowed (map/sprite data), get creative with glyph prints instead!

The twitter tag is #tweetTweetJam, and there's a bunch of carts on here (the bbs), itch, and twitter for inspiration.

Looking forward to seeing all the awesome entries this time around, happy jamming! 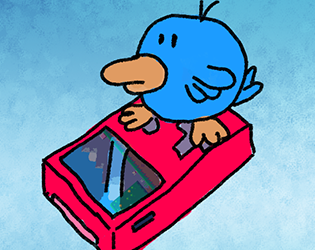 I briefly considered trying this jam, then I threw together something I expected to be pretty short - it was 614 characters before I even added real gameplay, LOL. I will definitely be curious to see what people who are good at this come up with!

Post the cart and we can see what can be done! There's lots of good tips in here too.

I'll finish the gameplay and post it! I did take a look at the gist guide and implemented whatever of that I could, but I'm sure there's some whitespace I can get rid of at the very least. I'm guessing that I'll be closer to 700-725 once I get the rest of the mechanics in.

You can also take a look at the announcement cart code in this thread. It uses many techniques I've picked up from previous TweetTweetJams.

@Lafolie Here's the gameplay complete cart. I was too optimistic thinking it would be 750, but it's sitting at 1039 characters right now. The collision detection is also, ahem, "imprecise" - but that may not matter if I can't find 479 characters to lose :).

It's 5am here, but I will take a look at this. I can already see some easy savings - use the shorthand if:

Also, take a look at my golf game, which features similar gameplay:

There's actually places I could improve that game, if I recall correctly. Also, when playing your cart I felt that the cursor moved kinda slow. Maybe speed it up a bit?

You can for sure pull this off, and enter it into the jam! Multiple entries are allowed too ;)

Thanks for taking a look!

Yeah, there's a lot of little number tweaks that need to be done. I started with moving the cannon 1 degree-ish per btn fire, but it does make it hard to get those UFOs that get to the sides. The UFOs were initially smaller too, which made it near impossible to hit them.

@2bitchuck okay, I took a quick look. There's a few newlines and spaces you can remove for a start. Anything ending parens can be chained: a()b()c().

You might want to alias some functions too, into single-letter identifiers. Anything you use 3 or more times is generally worth aliasing (add , del , all).

Your input code could probably be refactored to use less chars. Check out that gist I sent, and don't do elseif - just handle both directions.

Next up is your collision code. Distance/AABB/etc is costly, consider doing pget and checking the colour beneath an object (that's how my golf game works).

Next, consider using circles - or better yet, glyphs - for objects. You're already familiar with ?"s",x,y,c - this is a matter of compromise, and such compromises must be made for TweetTweetJam - that's the nature of the game.

Another compromise, draw the score at the top, you can save chars by having less digits in your number literals. You can also alias commonly used literals - you use 128 more than 3 times! Speaking of numeral compromises, if you can fudge similar numbers to be the same, you end up with something else you can alias. I do this a lot in my tweetcarts - a lot of the circles and boundaries in the golf game share the same set of vars.

@Lafolie thank you for all the tips, this is super helpful! I signed up on itch, so I'm excited to see how well I do :).

Interesting challenge! After some experimentation I made a game enabled by poke4() and sspr() where you try to to cross increasingly-busy lanes of traffic. There are 4 levels and it comes in at 554 characters (without the title comments).

(update: oops, uploaded two copies of cart, here and in the New Carts board, since initially this one wasn't showing up under my profile...)

It's not the most polished game, but it does fit into 560 characters! L/R to move the cannon, X to fire, Z to backspace. Spell the shown words before time runs out. The faster you finish each word, the more points! 4 very short words are all I could fit into the character limit :).

This was really fun; thanks for organizing! Here's my fish-eating game: https://www.lexaloffle.com/bbs/?tid=40332